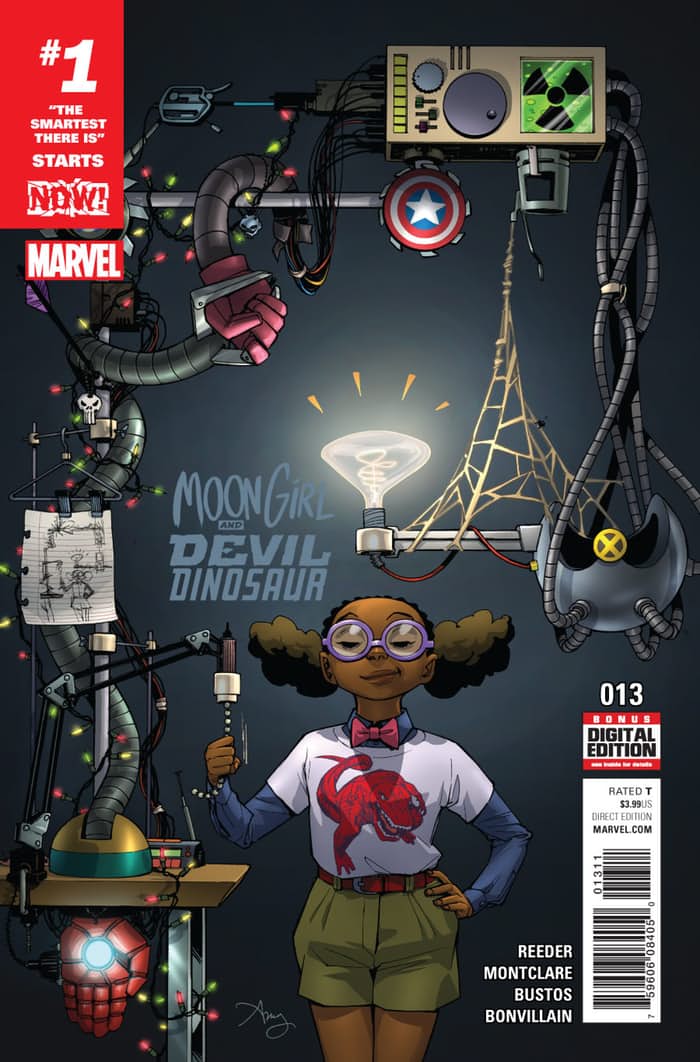 It’s official, Lunella is the smartest there is…and I couldn’t be happier about that.

Moon Girl is one of the most delightful, dynamic characters in comics today. Issue #13 of Moon Girl And Devil Dinosaur shows why, acting as a great jump on point for new readers who don’t know the character but have finally decided to take the plunge. Lunella has solved a riddle that has evaded the smartest characters in the Marvel U and it has confirmed something she’s known all along: she’s the smartest person in the universe.

This would be an annoying level of arrogance from most characters, but Reeder and Montclare write Lunella’s internal monologue and dialogue so brilliantly that you can’t help but be charmed by this amazing girl. She has a sharp wit and her banter with Amadeus Cho is absolutely perfect. Cho acts as a great tour guide for new readers, catching people up with story beats but never feeling like walking exposition. He feels like a bit of a mentor for Lunella, and the friction between the two characters works really well.

What impresses me with each issue of this series is how well Reeder, Montclare, Bustos and Bonvillain sell Lunella and Devil Dinosaur. It’s all the right kinds of insane, but if executed poorly it would just be a massive joke. There’s a connection between Lunella and Big Red that is obvious in every panel, every bit of dialogue, every pencil line and every shade of red on his scales. This duo has a bond, and I love it. It’s heartwarming and entertaining, a core piece of what makes this comic special.

Natacha Bustos’ pencils are fantastic in this issue, infusing Lunella with an immense amount of personality. She handles every piece of this issue with what appears to be ease, from dinner table conversations to a good ol’ fashioned throw down with Mole Man. Her style is an integral part of the Moon Girl experience, and this issue features excellent pencil work. Tamra Bonvillain’s colours enhance Bustos’ pencils and the total package is just damn good visuals. I love her colour work where Devil Dinosaur is concerned, and the guest star that closes out the issue leaps from the page with the dynamic colours. I can’t say enough good things about this art, it is charming, endearing, fun, and exactly what comics needs more of.

Moon Girl And Devil Dinosaur #13 is a great jump-on issue for new readers and an entertaining start for the new arc for established fans as well. Reeder, Montclare, Bustos and Bonvillain are producing one of the best titles in all of comics and I love where they are taking Lunella. The importance of this character is growing by the page and she’s worth the buzz. I can’t wait to see her conversation with the big guy who is very used to dealing with very smart people, it’s bound to be fabulous.