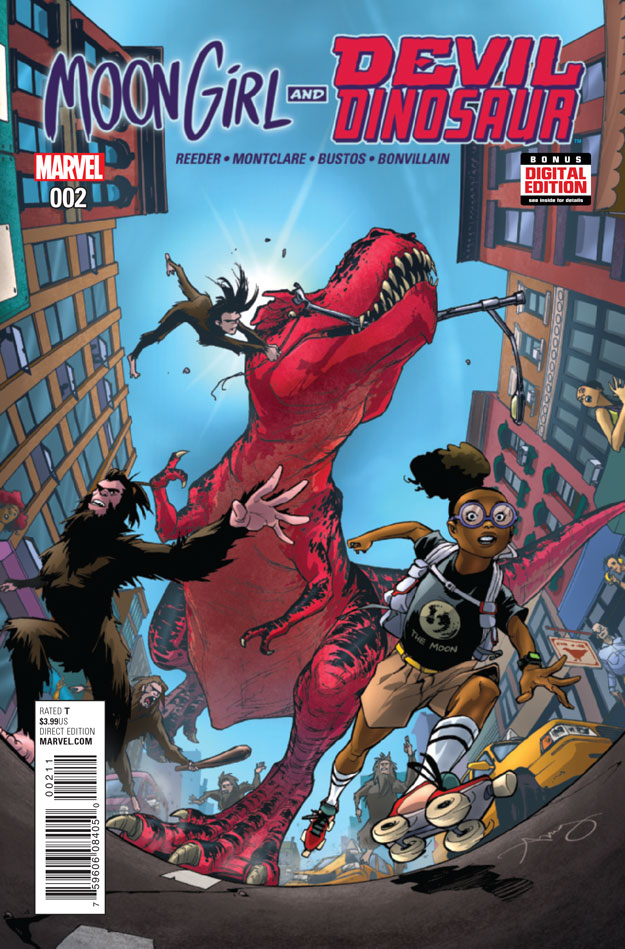 To travel in style, travel by time displaced Dinosaur!

Picking up right where the last issue left off, Devil Dinosaur and Lunella are taking a trip through New York and getting a lot of attention. Meanwhile, their cavepeople pursuers are quickly adapting to urban life. Lunella reveals a bit more about her origins, while Devil Dinosaur shows his true colors. By the end of the issue, we definitely haven’t reached the end of the excitement for Lunella.

I cannot state enough my love for representation of young, intelligent Black girls who are into science. Lunella is a wonderful character who is not one to let her fear show on the surface. Reading this issue made me wonder who she was before the release of the Terrigent Mists and what life was like for her. I feel as though the Mists acted on something that was inherent in her, rather than them simply granting her grand intelligence with not foundation or baseline. I really feel Lunella is a powerful character and I want to see her fleshed out more fully.

This issue is fast-paced and there isn’t much development, but Brandon Montclare and Amy Reeder manage to pull out some important info on Lunella. The enhanced development of our main character is important and frames much of the issue, but also points to some interesting potential motivations for her. I loved that Devil Dinosaur saw its own development, too, as it definitely has more human emotions than you might think. Lunella and Devil Dinosaur’s dynamic seems as though it’s going to be very interesting as the series develops.

Natacha Bustos and Tamra Bonvillain are a dynamic duo in this issue, as their styles are a great combination. What stood out to me the most were the details on Devil Dinosaur. Its colors are vivid and its lines striking. Bustos creates vibrant images that especially work well in such an action oriented issue, while Bonvillain excels at making distinct inks that bring out the best in Bustos’ art.

To be honest, reading Moon Girl and Devil Dinosaur #2 makes me feel as though we need a separate line for younger audiences. While the All-New All-Different regime seems more all-ages friendly, I think titles like this are lost in an ocean of other titles, which does not always bode well for a series. However, if Marvel rebranded some of its titles, rather than branching everything together, I think it would change the game for series like this, Squirrel Girl, Ms. Marvel, and others.

This is a series I’m definitely recommending to others and that I’m happy to lend to my little sister, who is enamored with science experiments herself. I love seeing characters like Lunella because we truly do need more of them. Never underestimate the power of a smart young Black girl running through New York.