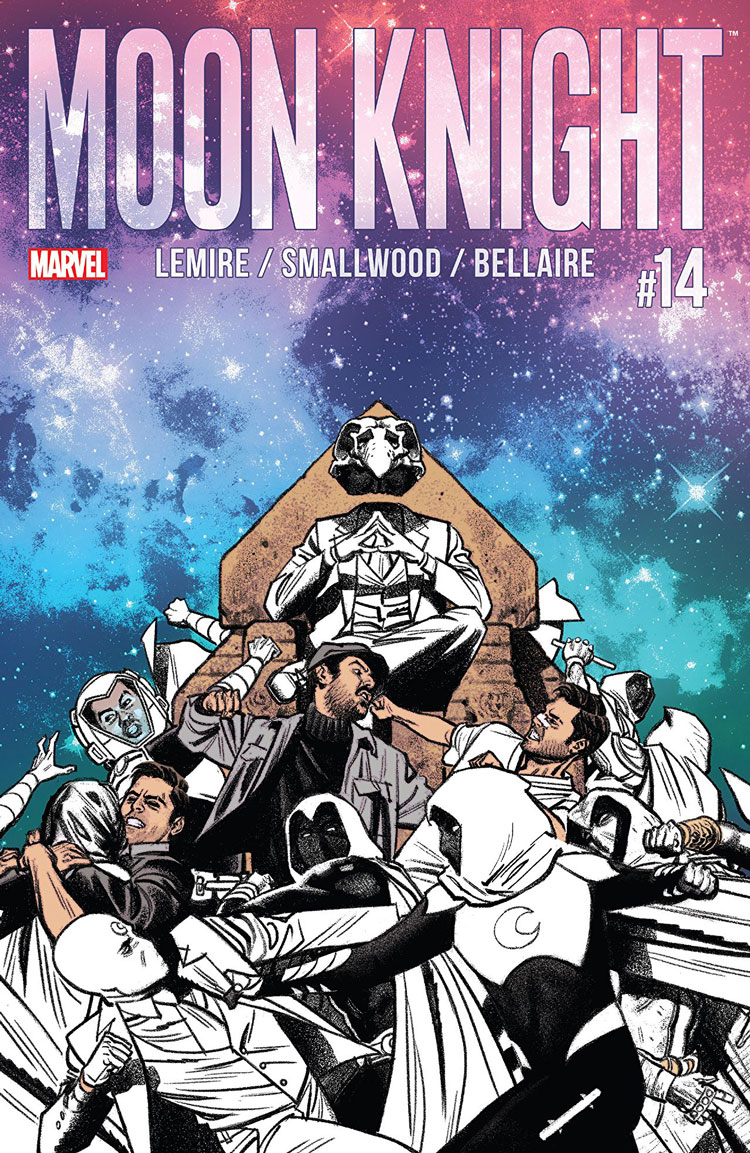 As I said in my review of Moon Knight #1, “Moon Knight is a character I have dabbled with, but Lemire, Smallwood, Bellaire, and Petit make this comic a must-read for me in one issue.”

I went on to compare their efforts with the Waid-Samnee (and predecessors) run on Daredevil. Unfortunately, this series is significantly shorter than Matt Murdock’s example, but it is no less impactful. Every issue of the run has been a solid read, an interesting study, a wonderful building block of the complex mind of Moon Knight.

Moon Knight #14, however, is a brilliant capstone. It can be taken on its own and handed to a neophyte, and they would most likely “get” the concept of Moon Knight. They would also undoubtedly be hooked by the seamless collaboration between story and art.

Like everyone else on the creative team, Jeff Lemire bids farewell to Moon Knight with this issue. And he does so without captions, without overwrought exposition. He gets Moon Knight and he knows when to get out of his way. As a direct result, Moon Knight #14 feels like a first-person observation, not a comic book story put together assembly-line style.

That said, the art is simply gorgeous. Cory Petit’s lettering becomes part of the story, weaving into the backgrounds and through the settings, dictating the sound of the characters’ voices and attitudes they bring to the panels. Khonshu is every bit as powerful in tone as he is conniving in cause. He has been manipulating Marc Spector, and it shows.

Likewise, Spector’s determined disgust shows through. Petit could leave the words, “Oh, we’re not just going to beat you, Khonshu. . .” out of the panel, as Smallwood’s rendering of the bandaged-nose Spector glaring at the reader broadcasts an imminent ass-whooping. Smallwood composes a story within every panel, and makes each page an epic saga. His gritty style gives his drawings texture that is undeniably mesmerizing and descriptive in its own right. Hearkening back to Moon Knight’s earliest adventures, Smallwood’s art would carry the story all by itself, stark black and white lines packed with textures and shades.

Except Smallwood has one of the best in the business adding hues to his drawings. Jordie Bellaire’s work is nothing short of sublime in Moon Knight #14. From the opening page’s star field colored in a manner that defies my ability to label it to the sickly gray dawn rain shower on the final page of this issue, every panel is a study in the impact of color, the meaning of temperature to story, and the effect of juxtaposition. No other colorist would bring this to this story, exactly as Smallwood requires it. As Lemire writes it. As Petit letters it.

As I previously wrote, this doesn’t feel like an assembled book. It feels like a collaboration, as though writer, artist, colorist, and letterer all sat in the same chair at the same time and worked on everything at the same time.

Moon Knight has never hurt to have solid talent tell his tales. An argument could be made that some of the best creators in comics – EVER – have worked on Moon Knight stories. And they wouldn’t be wrong. This series, capped off nicely by this single issue, makes a strong case for the distinction of being the best Moon Knight story ever.

A story I will not hesitate to re-read, to share, or all of the above. I just hope Marvel gives this series a worthy treatment, collecting the whole run in one oversized, hardcover volume to showcase the talented work. Until then, I’ll re-read the digital versions and paper copies that I have.