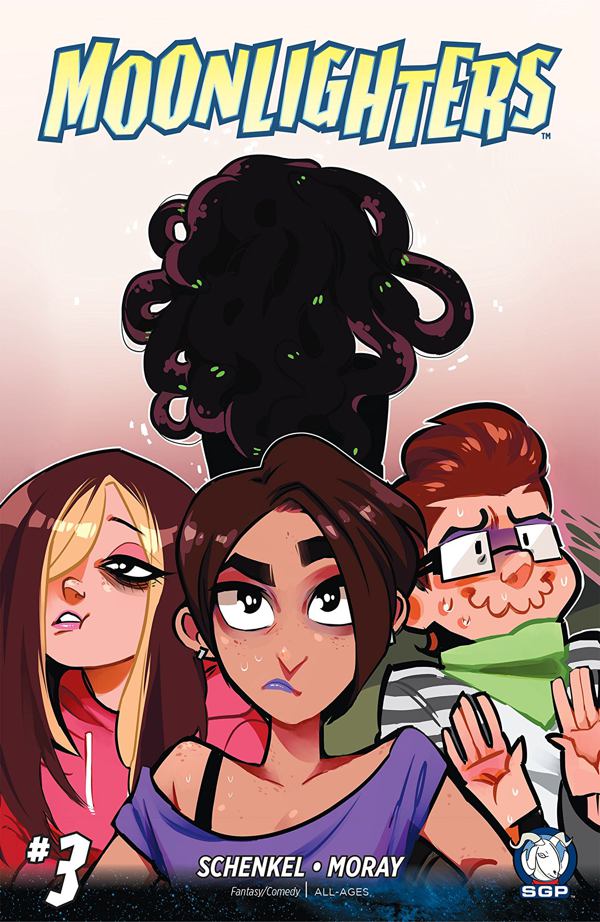 The Moonlighters are here to help with their task rabbit business for mythical creatures! The mundane become mystical in this latest issue of Moonlighters!

Schenkel has created a fun world in this comic of hers, a reality where the supernatural live amongst us and lead mostly similar lives to us. It’s intriguing to see what sort of new addition to magical creatures is part of Schenkel’s world. I like the overarching mystery of what exactly is becoming of our heroine, Renee, and I hope we soon get more of an idea of what being a bite-made werewolf entails.

I like that Schenkel emphasizes on the characters and their relationships rather than the world around them. Yeah, magical creatures living amongst humans is always an enticing idea, but what makes this story something to read is the humanization of these supernatural beings. I like that my favorite part of this issue is Felipe having a legitimate discussion with Maddy about college and the B.A.T.S. (the supernatural equivalent of the S.A.T.).

The art, while a bit rough around the edges at times, is enjoyable and I like that Moray brings a different style that you generally don’t see to the comic. I like how they draw Cerberus as well as the medusas. The medusa hair in general just looks fantastic. I would say that there are some continuity errors throughout the comic which can take you out of the story, but overall, the comic always has a fun feel to it with an undercurrent of something serious just under the surface.

I like how animated certain scenes are. The werewolves chasing dog scene and the surprise glitter bomb letter open bring life into the comic and add much needed movement into a comic that sometimes feels a bit static.

Moonlighters is a fun, episodic comic about a couple of awesome werewolves on every day adventures with a dash of fantasy for rent money. If you like slice of life supernatural comics, this series would be right up your alley.