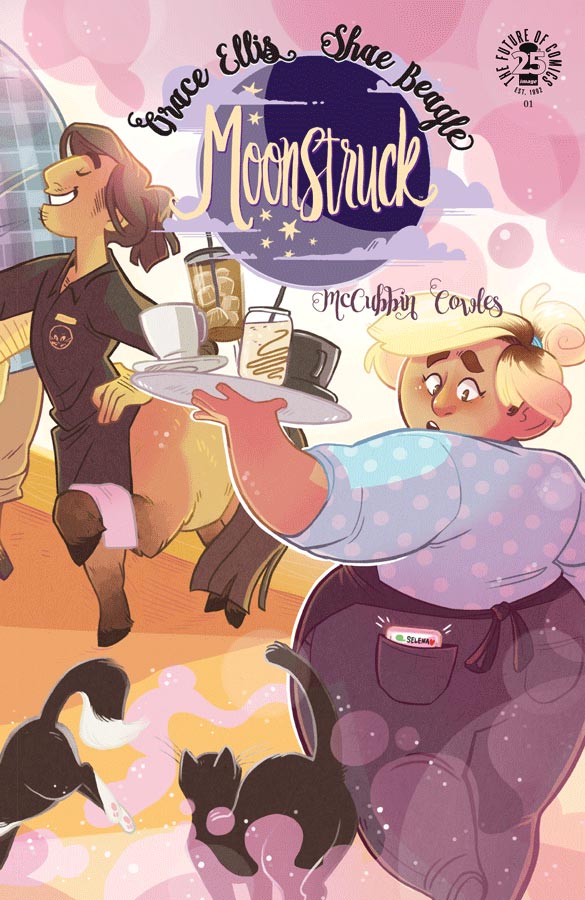 The creator of Lumberjanes is back with an all new series! With new love, great friends, and aspirations for ghost writing a Nancy Drew-esque series, Julie seems to have a pretty good life. But stress and her own insecurities become roadblocks for her in this first issue of Moonstruck!

I love Ellis’ work. Ellis brings a world of mystical creatures in a great slice of life way, telling realistic problems in a fantastical backdrop. Most, if not all, of the characters introduced in this first issue are intriguing from the get go, from Julie herself to the intimidating Lindi. I’d say there’s one joke that kind of rubbed me the wrong way in the beginning, which is a shame since I loved everything else. Besides that joke, I feel like everything is pretty much gold in this first issue.

I love the dreamy atmosphere Beagle creates. The art is polished and rounded, providing an overall soft tone to the work. Beagle goes above and beyond creating character designs, especially for those in the background. From skeletons in hipster clothes to a globby lady hanging out with her what seems to be leafy bat friend, Beagle does create an intriguing world of monsters.

The pastel colors draping most of the scenes created a lighthearted atmosphere and I love how the changes in palette aid in emphasizing the mood of the scene. I love how Julie’s insecurities and depression towards them drain color from the world around her, creating an off colored world that’s grey-tinted.

I like the clear distinction for when Julie is reading the Pleasant Mountain Sisters novel. There’s an old comic, old children’s mystery novel feel to the whole thing and that’s especially due to the work that Beagle brings to the table.

The lettering by Cowles is also pretty great. The red notes that Julie makes in the Pleasant Mountain Girls’ novel are a nice touch. I love how Cowles portrays Julie’s text conversation with Selena as well as her SFX for her indecisiveness throughout it, they’re good details.

I would definitely reading this. Yeah, there is one joke that felt kind of iffy to me, but overall, it’s a wonderful comic made by some great talent and I hope that Image publishes more comics like this one.