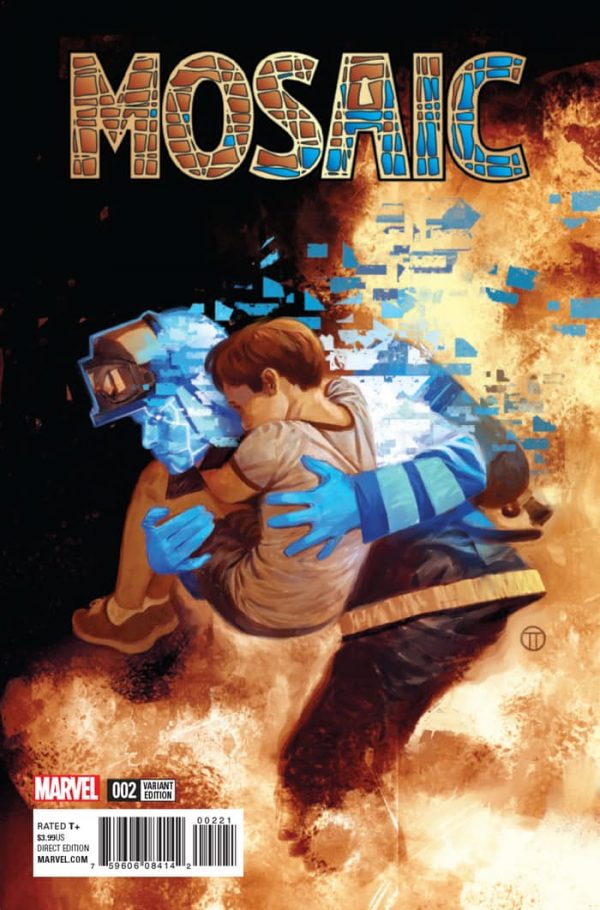 Sometimes, you  just have to get up.

Morris is still in Beto’s body and experiencing the pain of gunshots and the threat of death. He manages to jump ship, diving into the psyche of someone new and uncovering their own motivations for wanting to help people. Morris tries to escape from his predicament, only to come across unexpected barriers in his trip back to his body.

This story works from an interesting premise, an Inhuman that can take over others’ bodies and experience their memories, but this feels like a long way around to establishing Morris’ place in the Marvel U. The best parts of the issue are the conflict between Morris intrapsychic self and that of the people whose bodies he inhabits, as well as his interaction with their memories and their impact on his present behavior. I like this constant duality between self and others, as well as the drama it creates for the story. Otherwise though, Mosaic #2 needs some fine-tuning.

I’m not sure where Geoffrey Thorne  is heading with Morris’ story, but I also recognize the stellar moments within the issue. The story feels jumpy, which I can imagine is a narrative device that plays off Morris’ powers, but the execution also feels slow, especially for a new character. Within two issues, it feels like we’ve gone a lot of places, or Morris has frequently switched bodies, with little helpful development in the story.

That said, as Thorne is developing  the  foundation for Morris’ powers, the best scenes and dialogue come from Morris’ communication with others’ minds. For instance, the scene which draws back to Secret Invasion and how Kenny, whose body Morris is inhabiting, meets Captain America is brilliant. These moments are what I think will help Mosaic shine because they provide a creative mechanism for Morris to develop empathy and find how he wants to fit into a world of heroes he hasn’t been a part of.

Khary Randolph’s art creates urgency through perspective, movement, and linework. All of these elements are well done, but they do feel disparate from the speed of the plot. Randolph’s skills are helpful for conveying Morris’ confusion and desperation, and I feel the story would benefit from matching the emotional tone of the art, rather than the art fitting in a story which feels drawn out. I like that the colors provided by Emilio Lopez and Andres Mossa are careful with intensity and brightness and that this team uses those effects sparingly.

Morris is caught in a situation where things are normal to everyone else but him, which is best reflected in the colors used to display the environment of the hospital. When Morris is using his powers, Lopez and Mossa apply neat techniques and brilliance that add a new layer to the visuals, but also play on Thorne’s distinction between Morris and those around him.

Mosaic #2 is parts exciting, but it also feels trapped in a long exposition. I feel like not enough has been revealed about Morris, though the nature of his powers is becoming more privy to the reader. There are some awesome scenes that mark Morris’ development into a hero and that put an interesting spin on how his powers work. For the series to succeed, it’s going to have to pick things up, otherwise it may be difficult to grab new readers.