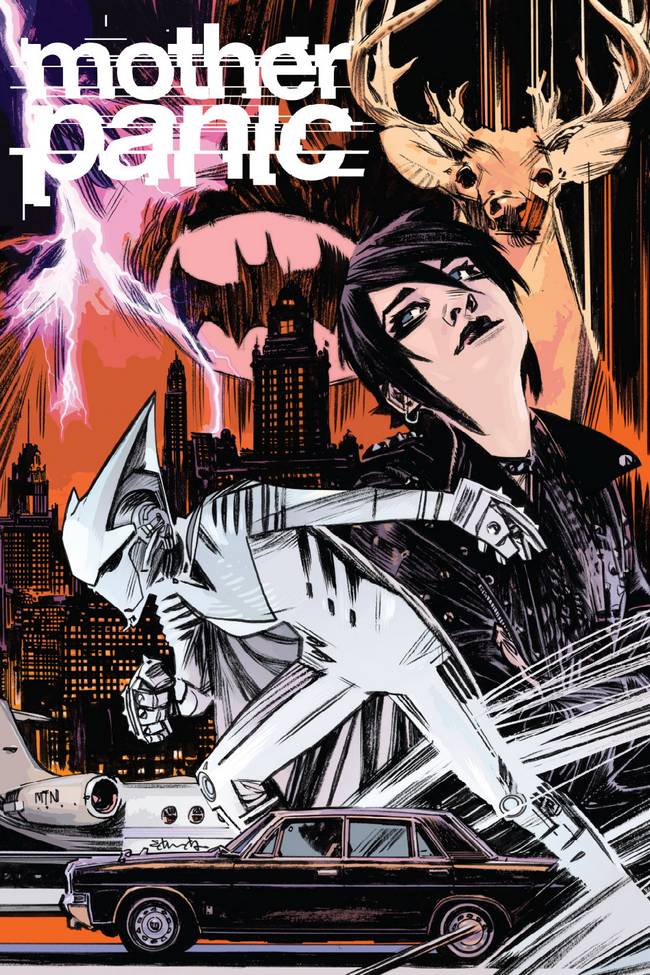 Batman maybe Gotham’s savior, but he’s not the only one running around in a mask. Mother Panic brings a new person to the scene. But is she a hero?

Houser, as always, does supremely well as she starts out this new series. While I love all of Houser’s writing in this first issue, her craft is strongest during character development within the flashbacks peppered throughout. The flashbacks add layers to Violet and scenes in the present have a very different feel to them due to the flashbacks.

Edwards’ art fits in superbly with the style Houser writes for Mother Panic. There are two styles of art that are crammed together in a jarring, yet perfect, combination, like chocolate covered bacon. There’s a punk rock feel to a lot of the art, which really goes with Violet’s personality and gives the comic some of its edge. However, most of the edge that comes from the acid trip, kaleidoscopic imagery thrown at the reader at points.

It’s hard for me to choose one scene, so, I’ll talk about a few. One involves a fight in an alleyway.

It starts with a splash.

A figure in white who looks like she stepped our of an intense rave punches a man in the face as she falls from above.

She calls, her face fully covered with a pink “X” over her mouth. Around the bottom, there’s a small panel, filled with red tones—a rabbit sitting in a skull. As she begins to decimate her antagonists, images flash in between fight scenes.

A cake with candles melting to the point that wax pours down from it, puddles around the baked good.

A white tree in a meadow of darkness, filled with purple and orange lilies and butterflies, several lightning strikes hitting that tree.

An orange and pink snake, in the darkness, devouring a white rat.

Another scene is when the white-suited protagonist comes to her base. A sailor’s song fills the air as she walks.

Oh, I went to the animal fair…

She carries a prisoner in toe with her, this masked woman.

…All the birds and beasts were there…

She steps towards a room.

…By the light of the moon…

A Willy Wonka-esque room, filled with bamboo plants, fake giant flowers and owls, a stone lion, and a merry-go-round. In the middle lies a woman extremely important to this tale.

…I was combing her auburn hair…

Imagine Disneyland on drugs. If Alice in Wonderland was an abandoned theme park. There’s something unsettling about these two scenes. Yet, it’s this uneasiness that pulls the reader in.

I’m not going to say Mother Panic is for everyone. It’s definitely not for children. But I will say that I highly recommend it and if you like the Young Animal imprint so far, you will love this.