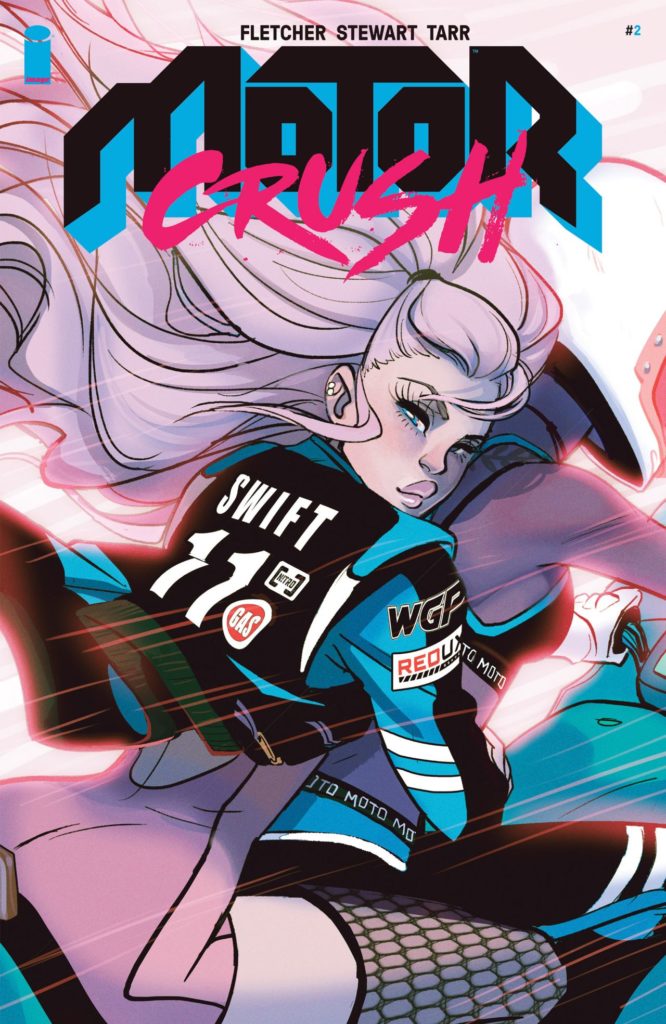 Like the jutting hip bones and exposed elastic waistbands that pepper Babs Tarr’s figures, Motor Crush #2 reveals just enough to tantalize while continuing to hold the real meat back.

One of the things that truly distinguishes Motor Crush from the rest of the field is that it exists as a piece of artwork first and anything else second. It’s a carefully constructed world purpose built for the kind of adventure that the sort of people that Babs Tarr draws would have.

The embrace of Motor City’s world as a deliberately unreal place frees it from the over-seriousness that’s plagued the medium since the mid 1980s and replaces it with an inviting, aesthetics driven experience. When Babs Tarr is in the driver’s seat, everyone gets to be sexy even when they’re tacky. It’s a peculiarity of her work that shines through the most this issue in the goons sent to intimidate heroine Domino Swift’s ex-girlfriend.

One of them, a hulking Pacific Islander sporting cornrows and a net top, looks like he could have walked straight out of a Gold’s Gym franchise in Miami, but his (white) partner in crime in a do-rag and oversized sunglasses is a complete mess. Despite those unfortunate choices, the latter of the two still gets a crop top set off by the carefully outlined hip bones and low slung pants that everyone gets under Tarr’s pen.

The introduction of Lola Del Carmen, Domino’s ex and the best mechanic in town, clarifies and bolsters the creative team’s perspective on performances of gender in a way that eclipses almost everything else in the comic. Lola is an explosion of the decorative and frivolous expressions of femininity that Tarr’s work revels in. She has gigantic, teased candy floss hair, bee stung lips, and exaggerated curves relative to Domino’s slim, androgynous frame.

Lola is equal parts subject and object, embodying both a fantasy love interest and a power fantasy of being a brilliant engineering mind who can both do her work and stay pristinely clean while doing so in the most impractical outfits. The overall subtle feminizing that Tarr imbues almost all of her figures with is a sorely welcome departure from the norm, but the outlandish embrace of the extremes of femininity is what makes the comic truly unique and praiseworthy.

The particulars of the advancing plot this issue aren’t re-inventing any wheels. The mystery surrounding Domino’s past and how she’s able to ingest what should be a deadly substance deepen as the stakes around her winning in the legitimate race circuit ramp up, developments that are more or less expected. Which doesn’t really count as a knock against the series considering the framework being built around it.

The outline of the story is a fairly familiar one, and even the ways that Lola gets caught up in the storm surrounding Domino are more or less expected, but it’s who gets to participate in this kind of a story and how they respond to its pressures that really matter here.

The odds that Motor Crush was going to be a queer-lead story were always good, and nearly overwhelming once the cover to this issue was solicited. There’s only really one way to read Lola clinging to Domino’s back while also wearing her jacket, and this isn’t a creative team liable to play with that kind of coding flippantly. Everyone involved understands that tension and release rely on more than just novel plot twists, they come just as easily from deep and genuine connections made with the characters.

The most intriguing and promising development this issue is how Tarr continues to evolve in how she portrays action through Stewart’s layouts. The issue’s big chase sequence makes especially clear just how much the setting is deliberately constructed to be a sandbox for the team’s imaginations as they go for their most explicitly cinematic sequence yet.

Nova Honda seems to draw from more and more real world locations as the pages go on. Is it in Florida? Spain? The Mediterranean? The Bahamas? The answer seems to be all of the above insofar as those influences can heighten the sense of adventure as Lola and Domino flee from the kind of narrow European backstreets that directors like John Frankenheimer and Luc Besson have famously exploited to American style raised freeways and neon lit parking garages.

Hints of the strategy of pulling from common Hollywood shots to create a sense of movement readers immediately recognize that co-writer Brenden Fletcher and Annie Wu used on Black Canary surface this issue, but Tarr’s sense of movement and action still seems to derive more from anime held cells than anything else. Either way, Tarr is fast developing into an artist who can command and direct the reader’s eye with authority.

Motor Crush continues to defy the zeitgeist by embodying what it means to create sequential art in a more literal sense than anyone else on the stands.