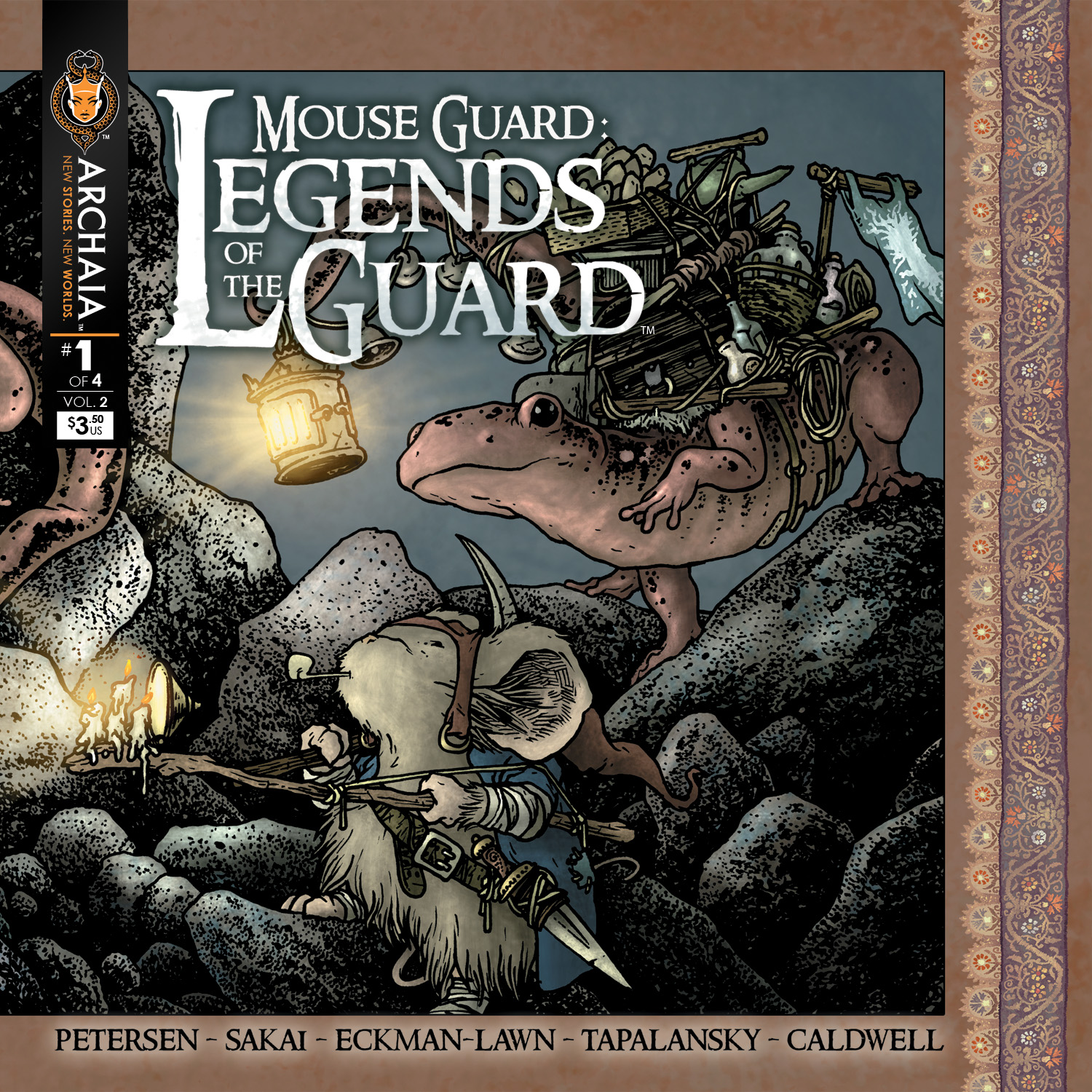 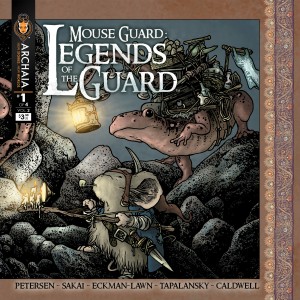 The Mouse Guard anthology series Legends of the Guard begins its second volume with three tales that help build the mythos of the Mouse Guard. The issue focuses on some grand legends of mice within the world of Mouse Guard, similar to the previous volume.

With an anthology title such as this, it is really easiest to break the comic down into its parts. The connective story, intro and conclusion from David Petersen were great. Being that Mouse Guard is his work, the tone and feel of his pages and script were perfect to lead into these small tales. They helped ground the book into the Mouse Guard universe, and eased some of the flow issues that occur from having stories of very different styles in a single book.

Stan Sakai’s story was filled with his signature humour and expressive art, though I did find the colour palette extremely jarring compared to the colours typically found in the Mouse Guard world. Transitioning from Petersen’s art to Sakai’s hurt the flow of the comic, even though the art was solid. Sakai can tell an amazing amount of story through his character’s expressions, and though his tale is short, he got through a fair amount of story in a small space. I’ll never complain about seeing work by Stan Sakai, and this anthology story is no different.

The second story, by Nick Tapalansky and Alex Eckman-Lawn, was the best fit of the three with respect to tone and style of Mouse Guard. Eckman-Lawn’s artwork is very similar to Petersen’s, and the colour palette was kept to the muted tones we typically see in Mouse Guard. Tapalansky’s story captures the wonder and adventure of Mouse Guard very well, and adds elements to the Mouse Guard world that it would be interesting to see Petersen explore down the line at some point. This was, without a shadow of a doubt, the strongest story of the three, and I’d happily see work like this from these two creators at any point down the road.

The final story by Ben Caldwell chronicles the adventure of two very young and spunky mice looking to foil the sacking of a town. Caldwell’s art style is dramatically different than what readers are used to in the world of Mouse Guard, though he does bring a lot of energy to this story. These two mice are full of sass and are entertaining because of it, but I did find during the story that the style made the tale seem like it was just a random story and not from the Mouse Guard universe at all. I realize the Legends tales are to be loose tie-ins inspired by the series, but when a style clashes so much with the primary style for a series that the mind disassociates the two completely, something isn’t right.

The Legends of the Guard series is built with die-hard Mouse Guard fans in mind, and those readers will most likely enjoy this comic quite a bit. The middle story, especially, adds quite a lot to the mythos and world of the Guard, and is probably worth the price of admission itself. I’ll be back for more Legends, as I enjoy exploring this world whenever possible, but as of yet the anthology won’t be at the top of my read pile.