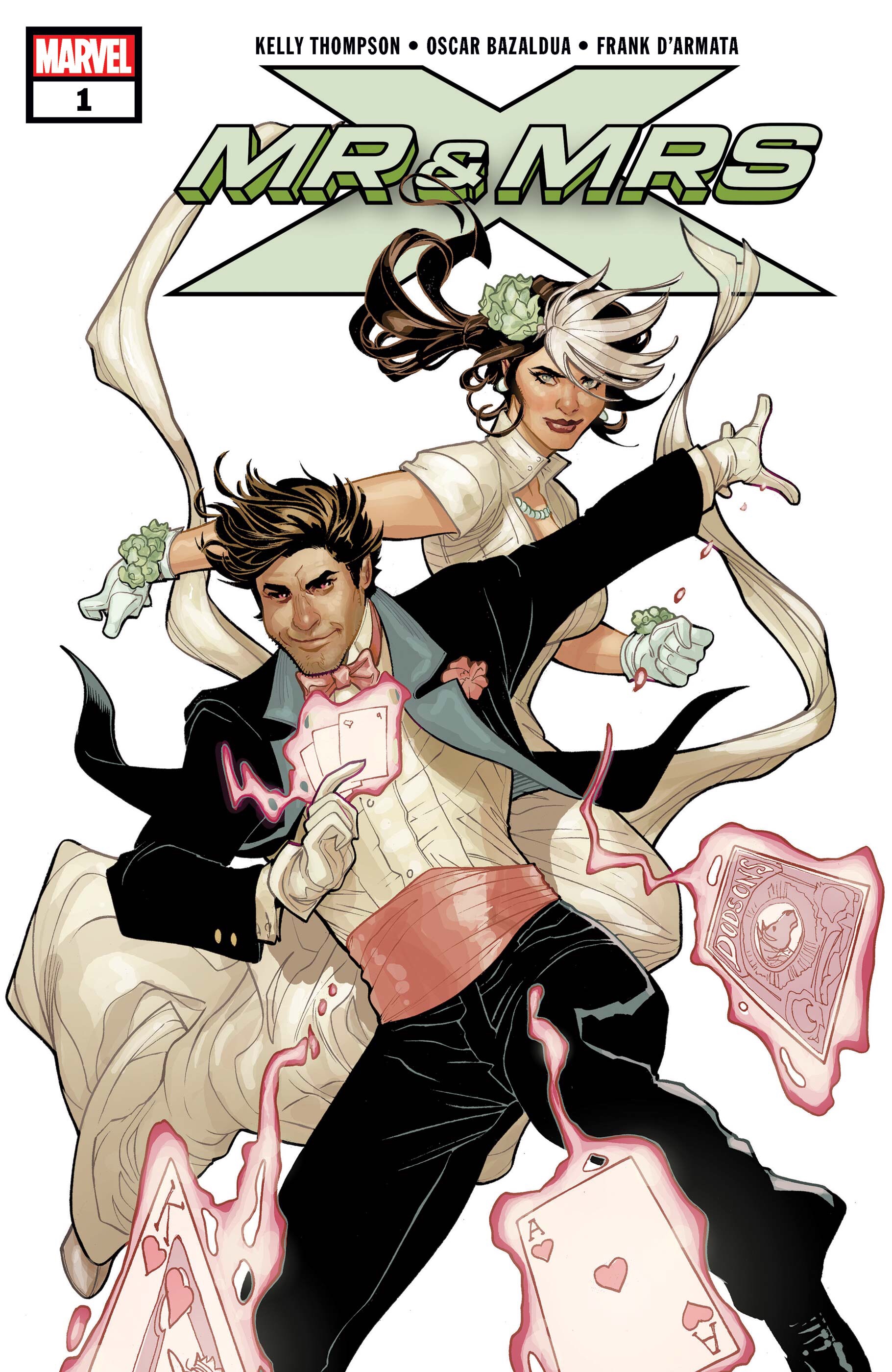 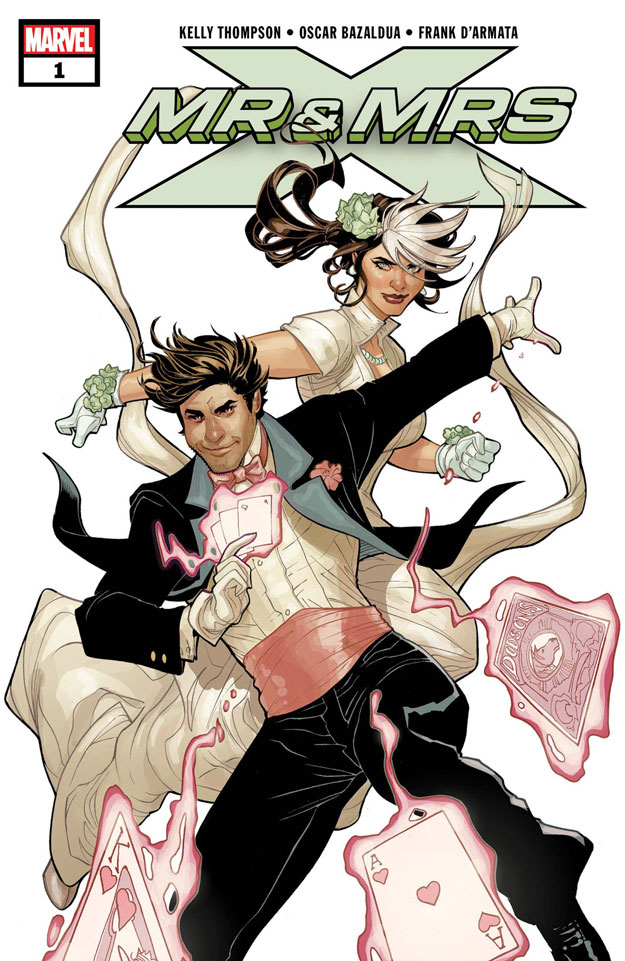 A behind the scenes wedding look, emotional reunions, hot and sexy honeymoons, plus awkward power switches create the first installment of Mr. & Mrs. X. To say that this is a day Rogue & Gambit fans thought would never come would be an understatement. Their tumultuous relationship has been stuck in “star crossed lover” mode for decades. With the fan favorite status of the Rogue & Gambit mini-series, the couple has their own ongoing title.

Their surprise wedding in another X-Men book was a shocker, especially for Rogue & Gambit fans who did not read the title. However, if you missed the big “I dos” don’t worry. This issue takes the first half to go behind the scenes of the wedding. The verbal nuptials are not included.

However, Oscar Bazaldua and Frank D’Armata do a beautiful job of creating a reverse order sequence, interlaced with the couple’s impending challenge. It’s a creative “rewind” that culminates in an explosive and romantic spread back to the kiss at the end of their ceremony. There are lots of cameos by various X-Men, and plenty of digs by those who do not like Gambit. There is also a surprise mutant guest, who crashes, but helps to make the Rogue & Gambit relationship come full circle.

Kelly Thompson’s choices and one liners show a genuine love and knowledge of the X-Men universe. The quips and notes play up to the happiest of times between these characters. It might be a rose-colored glasses approach to the story, however when you’re at a wedding that actually happens you want those feel good moments. There are a couple of moments that feel like their reduce characters to one notes. Example’s include Iceman’s, “… not because I’m gay…” styled line and Nightcrawler’s, “I’m her brother…” mentality. However, the purpose of these jokes is more to acknowledge there are people (be they fans or comic characters) who just do not like Gambit.

The facial features Bazaldua gives everyone feels distinct with a couple of exceptions. There is one instance where Magik is helping Rogue prepare. In panels horizontally aligned, Rogue and Magik make the same face, at the same angle making them look almost identical. What keeps them unique from each other is their hairstyle, eyebrows and D’Armata’s skillful shading so they have unique nose contours. This happens again when Rogue and her wedding crasher are cheek to cheek. Their facial structure is extremely similar and the color work helps to distinguish them.

There are several instances of characters being overlaid across panels as wells as borderless panels combined to create romantic, sweeping moments. For those who were not fans of Rogue & Gambit’s wedding being tied to the breakup of another couple, these visuals helps to give them their own wedding moments to shine.

This issue not only highlights the ceremony preparations but the subsequent honeymoon. Things get a little risqué for a Teen+ rated (13 and older) book. It seems like a lot of the preview pages attempted to clue audiences that this was a possibility. While the dialogue writes off the steamiest panel as “tickling,” it looks nothing like tickling and more like exactly what you think… and many fans want. As a Rogue & Gambit fan it’s probably one of the hottest scenes of their relationship. As a parent, I’m glad I read the comic so I could decide who should and should not read it in my household, as well as if any discussions need to happen.

This is more of an action light issue, with the fighting relegated to the last few pages. However, it is a fierce burst of fun. The newlyweds are pulled away from their romantic time to lend a hand at their secret honeymoon spot. It creates a surprising ending and introduction to an unusual team-up that can be scene on the cover of issue two.

Fans of the Rogue & Gambit mini-series will have many of their wishes fulfilled in this opening tribute to their love. It’s nice to see a Marvel couple allowed to progress and officially have adventures together; not just in mini-series format. It’s also fun to see the humorous turn the couple’s honeymoon could take through the next arc.