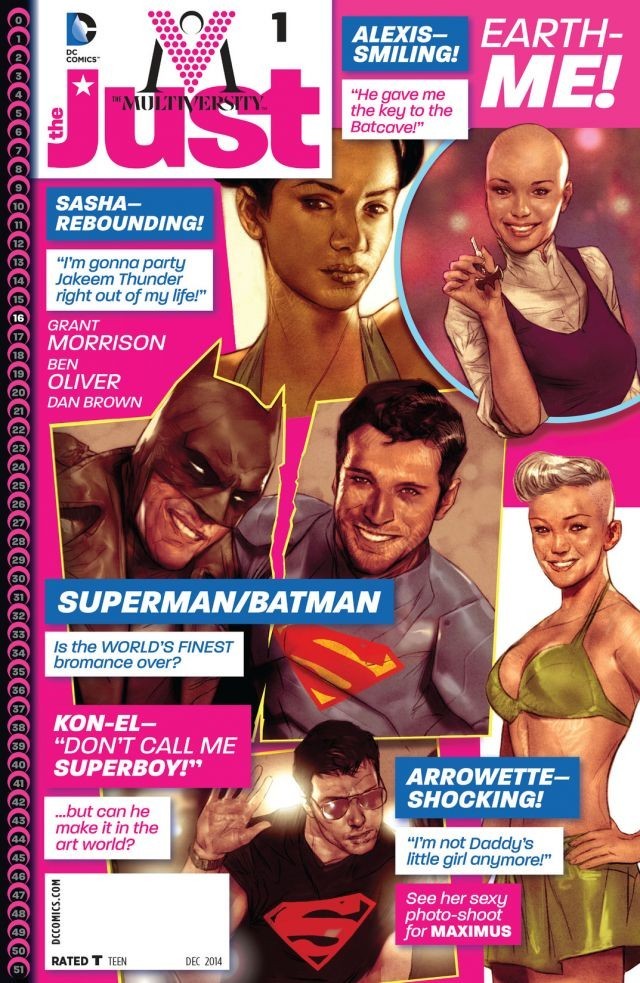 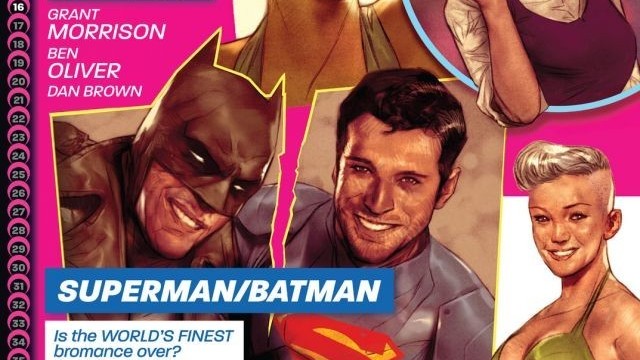 Grant Morrison’s tour of worlds continues as we come upon Earth-16 — a world where crime has been eradicated and the children of Earth’s Greatest Heroes are left with nothing to do but party, scheme, and play at their parents’ legacy. But when one of their own is driven to suicide by a cursed comic book, who is left to uncover the mystery? They aren’t called the World’s Finest for nothing…

It’s amazing to me how one book in this series can be so different from the next — artistically, but also completely in a theoretical sense. Jumping from a war-era pulp world to its complete opposite, a social media-infused, TMZ-inspired take on super-heroes, should make one or both of the concepts feel trite. But the opposite is true, in fact.

The Just #1 is surprisingly insightful in its focus on a generation of super-heroes who have nothing but their parents’ legacies to hang onto. No real threat or danger has produced a group of meta-humans who desperately want to participate in the world, and their shallowness — while not excessive as one would expect — masks the same emotions that drove heroes to do the right thing or seek adventure all the way back to the 1930s.

Superman (Chris Kent) and Batman (Damian Wayne) may be the primary protagonists here, but the stars can barely be counted throughout these pages, with Green Lantern (Kyle Rayner), Green Arrow (Connor Hawke), Sister Miracle (Sasha Norman), Alexis Luthor, Megamorpho (Saffi Mason), and Menta (Holly Dayton) having really significant moments peppered throughout the narrative. You get the sense from all of them that they’re suffering in one way or another, a symptom of a culture that doesn’t need them, but it strikes the right balance. We neither get overdramatic or intensely shallow behavior from any of them as much as we are shown real people who just happen to be heirs to the greatest honor their universe has ever known.

Morrison scripts their relationships quite perfectly, never forgetting that these are indeed comic book heroes. There’s something deeply honorable about Chris Kent and deeply maniacal about Alexis Luthor, and if either of them were real people, you’d question their sanity. But the comic page has that give and take that brings you closely into their motivations without scaring you with them or revealing the writer’s hand.

Ben Oliver completes this picture of unreal reality with his painterly, realistic style that again, strikes the perfect note of how real people could pull off a super-hero costume and not look ridiculous. It doesn’t have the sheer texture of an Alex Ross/Kingdom Come layout, but it harkens back to that, while still employing classic comic ink outlines. The combination just works magnificently for a book that’s trying to ride that line subtly and outright in the meta-narrative.

With literally a cast of 100 super-heroes (all introduced or featured prominently in 1990s DC Comics titles), Oliver had quite the task in front of him, and he succeeded with flying colors (literally) in portraying the four-color explosion of that era. If you worried about not seeing your favorite character*, worry not. Even in the most minor of scenes, Oliver is packing in characters that will make the die hard fan squeal when he or she finds their now likely absent hero. These include:

In the end, The Just concludes abruptly, but that seems fitting — leaving us on the edge of our seat about the kids’ fate as they too have been on the edges of theirs. It’s a wonderfully rich book that Morrison and Oliver have brought forward, and one that I sincerely want to return to as soon as possible.

* I’m not holding it against you, Grant, but the not-seen-in-over-three-years Donna Troy was mentioned in the solicit and shown in sketch promo art, and is nowhere to be found. Unhappy Matt is unhappy.

But it was still an awesome book.