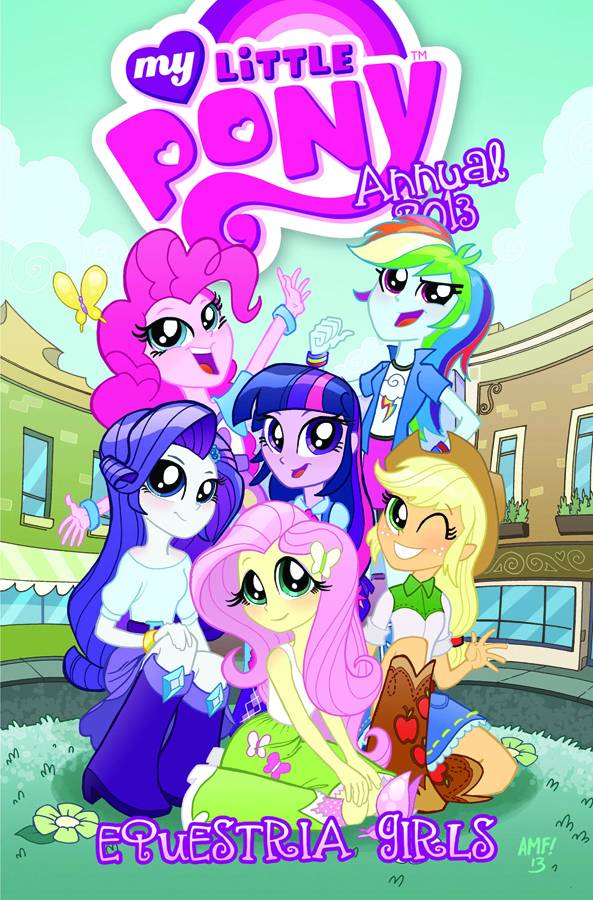 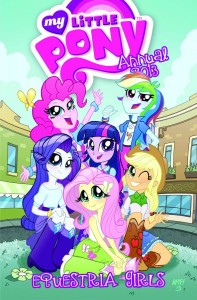 Make no mistake, the annual for My Little Pony is an Equestria Girls book, if the cover didn’t make that clear. The traditional take on Ponyville from Katie Cook and Andy Price can be found in the opening pages. However, that is a set-up of what leads the audience back into the mirror world of Equestria Girls (I say “back,” assuming many who would pick up this book have seen the new movie as well). If you have not experienced the movie, fear not, this books spoils none of it. In fact, Twilight being on the cover is somewhat misleading since this story appears to have taken place without her being known to the main core of five friends.

As far as the actual story is concerned, it’s a classic My Little Pony moral that takes too many pages to tell. In the center is a view on friendship that the girls have taken for granted. Only this time, it’s before they were actually friends. While the effort to marry the traditional worlds of Friendship is Magic and Equestria Girls is almost seamless in plotting, the difference between each universe staggering.

The original pony-verse is quick, overt and to the point; the only subtlety is cultural references for the adults watching. On the flip side, Equestria Girls takes most of the book establishing traditional story, personalities and friendships most fans young and old are familiar with. It’s a retelling that seems almost unnecessary. The humanoid reboot, to appeal to an older audience of girls, can be lost on adults who are looking for something new to dive into and laugh about.

My daughter, however, was a lesson to me that new packaging can be exciting for those at a younger age. For her the high school aged Equestria Girls hold a magic all their own. To her they seemed more stylized, grown-up and novel since there is not as much information out there as there is with the traditional Friendship is Magic.

The moral of the story is obvious from the beginning.  That doesn’t mean it cannot be emotional and heartfelt when reading Rarity’s single panel summary, that the average reader could potentially skim over. It also sets up the motives of our villain introduced and almost forgotten in the first half of the book.

If you have someone, especially a younger someone, to share and teach the overall themes of this book with I recommend you grab it off the shelf. However, if you’re just an exuberant pony fan you may want to wait until the annual is collected with the rest of the story that has yet to be played out.