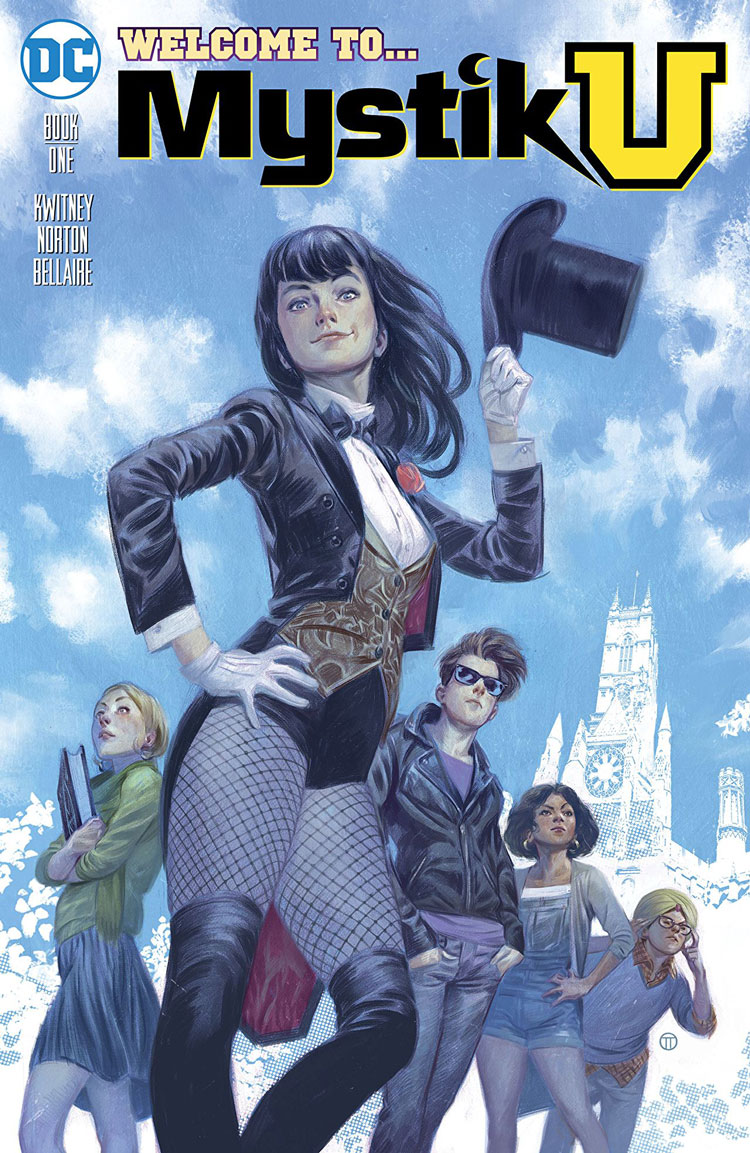 A young Zatanna Zatara is introduced to the world of magic as she enrolls at Mystik U. What mysteries lie in wait there, and will she unlock her true potential?

Mystik U is a delightful comic, a young adult-friendly mixture of magic and mystery set in a university run by DC’s magical characters and training the next generation of magicians. It opens on a (mostly) power-free Zatanna having a fight with her dad and accidentally banishing him to Hell. She’s then taken to Mystik University by Dr. Psychic, a multiply-bodied entity that serves as the school’s headmaster, in hopes of getting her powers under control.

Zatanna serves as our point-of-view character for the book and I have to say it’s a delight to see Z written by a woman. There have been some great writers of Zatanna over the years, but they’ve almost always been men and frequently have had a certain leering quality to them.

One small example: The story opens with Zatanna in her classic top-hat-and-fishnets costume, but it’s in the context of acting as an assistant for her father’s stage magic show. Within a page of getting sent to Mystik U, she’s wearing a new costume evocative of the classic one, with a black-and-white tuxedo-esque design, while simultaneously looking like something a teen would actually wear.

Along with Zatanna, we’re introduced to a score of characters. This includes pre-existing characters, like Cain and Abel, the hosts of the Bronze Age House of Mystery and House of Secrets horror anthologies, and new characters, like Pia Morales, a Latina woman with healing powers, and Davit Sargon, an Indian iteration of Golden Age character Sargon the Sorcerer. It’s great to see a diverse and well-written cast of teenagers. The students are realistically awkward and well-formed characters, and the writing never crosses the line into cringey try-hard teen-speak.

Michael Norton’s art suits the material perfectly. Characters, whether, adults, teens, or goo-monsters, are drawn with expressive faces and a clear sense of action and dynamism. The characters are also well-designed; characters wear different outfits in different scenes, which is weirdly rare in superhero-type comics, but their clothing always represents their personal styles. Professors dress conservatively (or in costume), while students dress like actual college students would. Jordie Bellaire’s color work is, as usual, excellent, bright when it needs to be, hauntingly candle-lit when the scene shifts to darkened mansions and crypt corridors.

Mystik U is presented in an extra-large format, with forty-eight story pages instead of DC’s standard twenty. Those extra pages are put to great use; in a single issue, Mystik U delivers a tease for where the story is eventually going, gives a brief origin for Zatanna, introduces the cast and the university setting, lets us get to know the characters and fleshes out their personalities, sets up then resolves a mystery in a satisfying way, and leaves hints at future plots. It’s among the most satisfying single issues I’ve read this year that also serves as part of a larger story.

Mystik U #1 is a great first-issue for a charming, young adult-oriented miniseries that also has deep ties to the history of the DC Universe, going back to Action Comics #1. It lays the groundwork for the rest of the series while serving as a fulfilling self-contained story in its own right. Highly recommended.