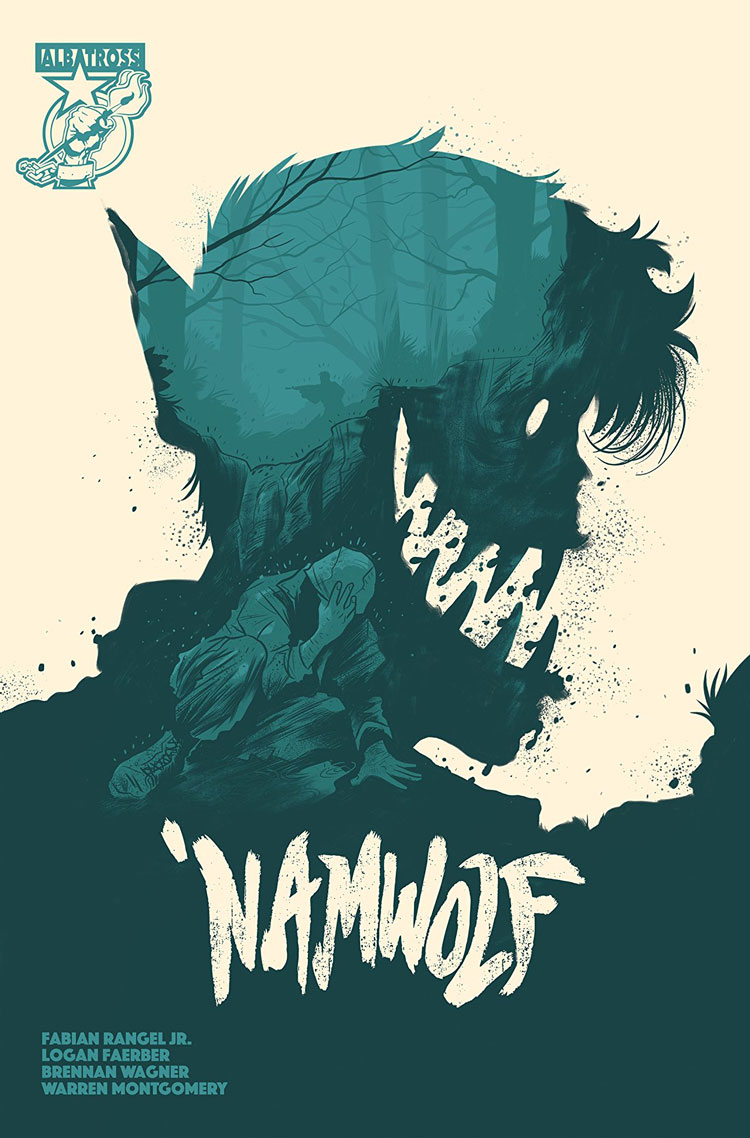 “All war is a symptom of man’s failure as a thinking animal.” John Steinbeck’s quote maybe right but once we are in war sometime it’s best to let the animal loose.

In ‘Namwolf #2 we find a situation where a man’s Werewolf curse comes in handy as he discovers enemy soldiers aren’t the only thing to fight. This issue reveals Namwolf to be a hero and not the animal he appears to be.

Fabian Rangel Jr. gives us such an awesome interpretation of the monsters of war: man. It is horrible to think about the horrific things that man has done in times of war. However, Rangel gives us this story of a man who takes that monster inside of him and does good with it. It’s a perfect allegory for men that go to war without knowing what truly lies inside of them.

The mechanics of the story work excellently and take us to the past as Marty learns about his family’s past before bringing us back to the present to fight a new enemy. The last half of the book is paced pretty quickly as it is a well scripted back and forth battle.

The narration of the story reminds me of the narration from the opening of War of the Worlds or The Twilight Zone. It’s an omnipresent narrator that looks and judges the actions of the characters as it recounts the events. The reader as well as the characters quickly discover the hero inside of Marty.

The artwork is a joy to take in and brings levity to an otherwise heavy story and events. Although there are beheadings and enbowlments galore the cartoonish artwork keeps it from becoming overly gory. Even ‘Namwolf himself, though a ferocious beast, looks like something a child would cuddle with when it is not murdering someone (Namwolf, not the child).

There is a lot going on in the final battle which makes it hard to discern what is happening but it seems to be drawn from the soldier’s perspective. This makes sense then as they wouldn’t be able to make out what exactly was happening at night in a fast ferocious battle. Keep an eye out for the sound words, there are some really awesome ones put to use in this issue. The panel design and layout in the book is outstanding.

The entire book has a very cinematic feel to it with lots of wide panels used for the contemporary scenes and 4×5 panels used for the flashbacks to the past. Especially nice is a scene with the soldiers in a field. It’s done at a very high angle with the moonlight stretching out their shadows behind them. It captures the night’s silence and danger perfectly.

Wagner’s colors really are the cherry on top of this book. The palettes gives the scenes in the jail cell heart and a connection to the past but the outside moonlit scenes are full of cold terror. The deep blood reds used during these battle scenes show the deadliness of the combatants animalistic attacks on each other. Montgomery’s lettering is outstanding. It changes up for a few different scenes and each style is attractively done.

Overall if you didn’t pick up the first issue already, you really should. It is an excellently made book with a Twilight Zone quality story. Though it contains deeper messages about man and war there is so much more to enjoy in the story and the beautiful artwork. Pick up this issue now!