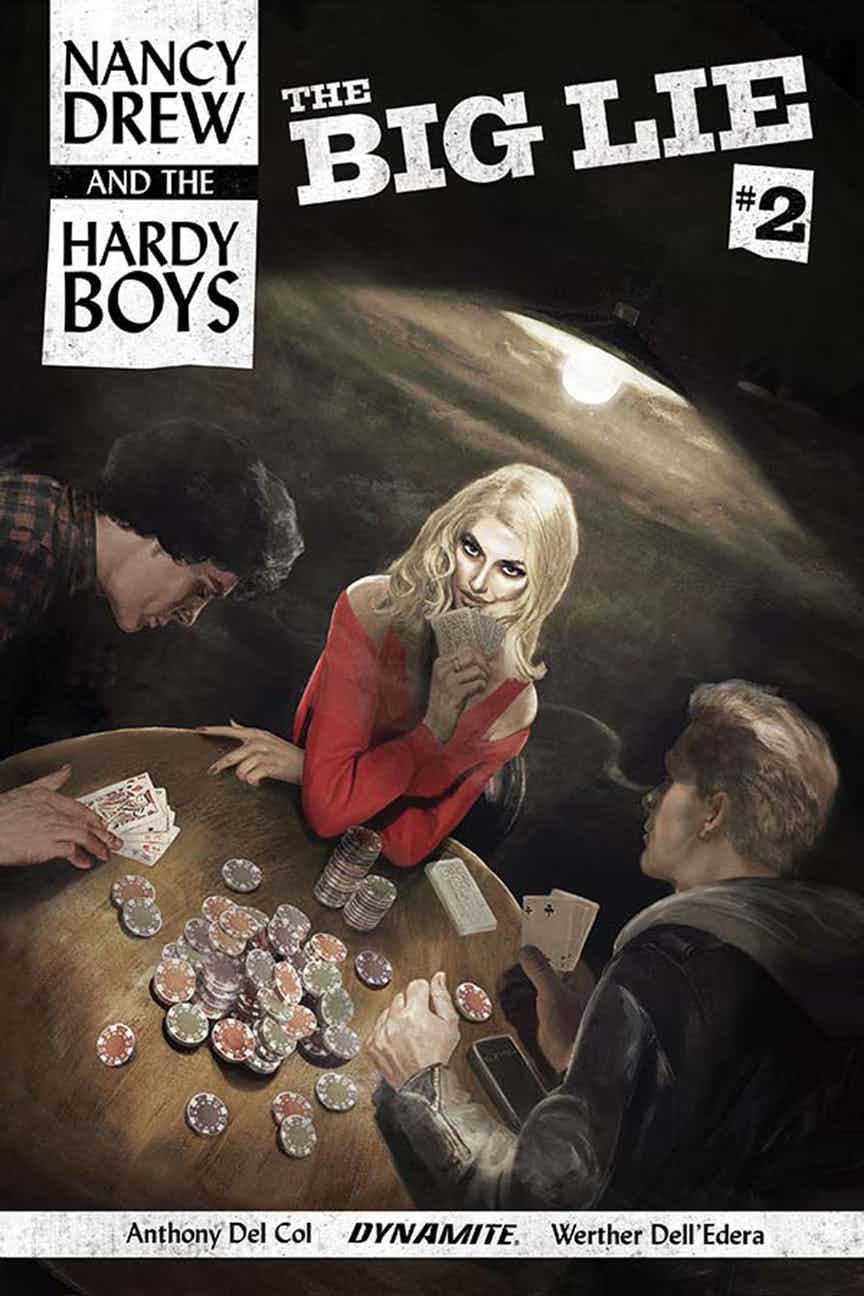 The Big Lie #2 is the continuing story of Nancy Drew along with her childhood friends Frank and Joe Hardy as they try to solve the murder of the boy’s dad. If you’ve never heard of the protagonists before, they are amateur detectives from a series of books that were published in 1927. Over the past 80 years their stories have continued on with updates being given to them in almost every decade.

This most recent version is set in modern times but has a very enjoyable classic feel to it. The genius of The Big Lie — and especially this issue — is the tribute to the original novels (and thankfully not the 70’s TV show) without being heavy handed in the cliched style of the 50’s.

While the first issue introduced us to the Hardy Boys and the murder of their father, issue #2 serves as an introduction to Nancy Drew. We learn a lot about her life and what shaped her growing up. Her origin story is especially sad considering she appears to be a very small child when tragedy hits. The rest of the issue focuses on the next steps in their attempts at uncovering the real killer and ends with the group finding themselves in a bad situation.

While Del Col wrote the first issue from Frank’s point of view we find ourselves in Nancy’s head for this one. The writing here may be slightly cliched, but in a good way that fits with the overall feel. There is a melding of classic 1950’s phrasing and style that is nicely balanced with modern setting.

If you have read the novels from the 60s you will probably be very comfortable with this series. You will even see a reference to one of the original ten Hardy Boys novels: “The Case of the Missing Chums.” It was one of their first cases and dealt with their search for missing friends.

However, the artwork shows the reference to chum as bait in this scene and points toward an overall theme in issue of setting a trap with bait. If there is one thing that doesn’t work in the writing is that the boys always seem very indecisive full of a lot of angst. While this is fine sometimes, especially for their situation, it does seem to be overdone.

This series so far has done an exceptional job of calling back to the original style of the novels and the artwork has been a major part of that. The style that Dell’Edera uses is very reminiscent of the late 50s – early 60s fashion illustration. This gives our main characters a sense of sophistication, especially Ms. Drew who seems to be in control of every (well, almost every) situation.

Look for the artists’ nice work of conveying Nancy’s different moods in her poses and facial expressions. There is a beautiful series of panels that show Nancy and her father’s evolving relationship over the years. Throughout the book the inks do a great job of conveying the grittiness of the story in a balancing contrast to the delicateness of the pencils.

There are a lot of dark scenes in this issue with a ton of ink, however, the reader won’t find themselves drowning in it. The darkness seems to be just creeping at the edges. The colors do a lot to hold the inks back. We spend a lot of time immersed in Simeone’s muted colors that again are callbacks to those fashion illustrations but also due to the situations we find our protagonists in. It subtly highlights the beauty in soft thin lines of the pencils and inks. The golden warmness of their youth in a flashback scene is a nice break to these pale colors.

Though the main plot may seem simplistic it is a joy to read. Both in its artwork and writing The Big Lie provides the reader with a simple yet sophisticated break from big event books and end of the world crossovers. It is a tribute to the original novels that if you have ever read and enjoyed them, this issue is a must. Even if you haven’t, then the artwork itself is a pleasure to enjoy and worth checking out.