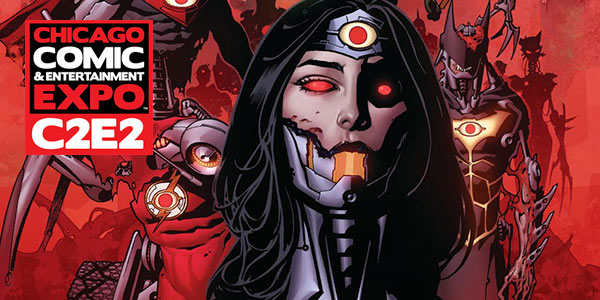 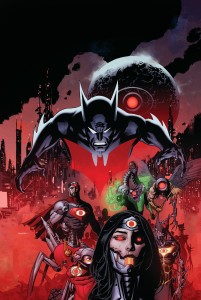 The future is now, as DC Comics releases its FREE introduction to their next year of storytelling to readers at participating comic book shops everywhere in celebration of 2014’s Free Comic Book Day event. 35 years in the future, mankind (and super-herokind) has been overtaken by the evil Brother Eye, and it’s up to one man to go back in time and stop it from ever happening.

Yep. This is a job for Batman. But which Batman? Enter Terry McGinnis, the Batman Beyond!

The writing team do a strong job of set-up for what is not the most original concept: AI having taken over the world in the far future. We’ve seen this part of the story in film a few times, from Terminator to Doctor Who (and even across the street at Marvel with Age of Ultron), but like most of those stories, the point isn’t how gruesome the future is. It’s what gets done about it, and the real twist in the story is how the savior character gets chosen and where he actually ends up.

It’s the plot point that will differentiate this story from those others I mention, and open up a world of discovery for fans of the New 52 today. I’ve already geeked out a little seeing whose arm Frankenstein is sporting (not to mention whose face!) and seeing Captain Cold remain a hero decades into the future. And that’s just a start!

Opening the series with Van Sciver’s art can’t hurt either, as his sharp, highly detailed style on scenes of the Flash and Captain Cold snap the reader in immediately to the desperation these characters are facing. From there, the results are a little mixed, quite literally. As a sampling of what the art styles of the ongoing series will look like, it’s great. As a cohesive single issue, there’s something to be said for not matching up artists who are so disparate in their styles.

Zircher’s more sketchy style of penciling is no less attractive than Van Sciver’s ultra-clean lines or Jurgen’s classic representations, but putting them next to each other in the space of twenty pages all set in the same setting is a bit unnerving. That said, the quality across the board is some of the strongest I’ve seen from each artist, and as someone already prepared to invest in the yearlong series, it’s a nice preview of what’s to come.

But that brings up the ultimate question: how appropriate is this comic for the venue of Free Comic Book Day? Last year, I felt strongly that the Marvel Infinity comic missed the mark significantly, but this book has things going for it that the previous event introduction did not. First, the book takes advantage of a host of easily recognizable characters without ignoring the lead cast of the ongoing series. Superman, Batman, Wonder Woman, Flash, and Green Lantern (the most recognized pop culture version in John Stewart, even) are all in evidence alongside Grifter, Amethyst, Frankenstein and Mr. Terrific — the real stars of the weekly series.

But the real trick is bringing in Batman Beyond, a character lots of DC television fans — who may or may not have ever read a comic — are familiar with, and will definitely serve as the entry point to the story. Will this book be great for the person who has no familiarity with DC and its heroes? Probably not. But is that the key demographic attending Free Comic Book Day? What this book does right is it rewards existing fans with a brand new dilemma to perseverate about AND give fans of DC’s properties in other forms something to grab onto. The fact that the twist provided will lead to a whole new world of wonder? That’s really, really tasty gravy.