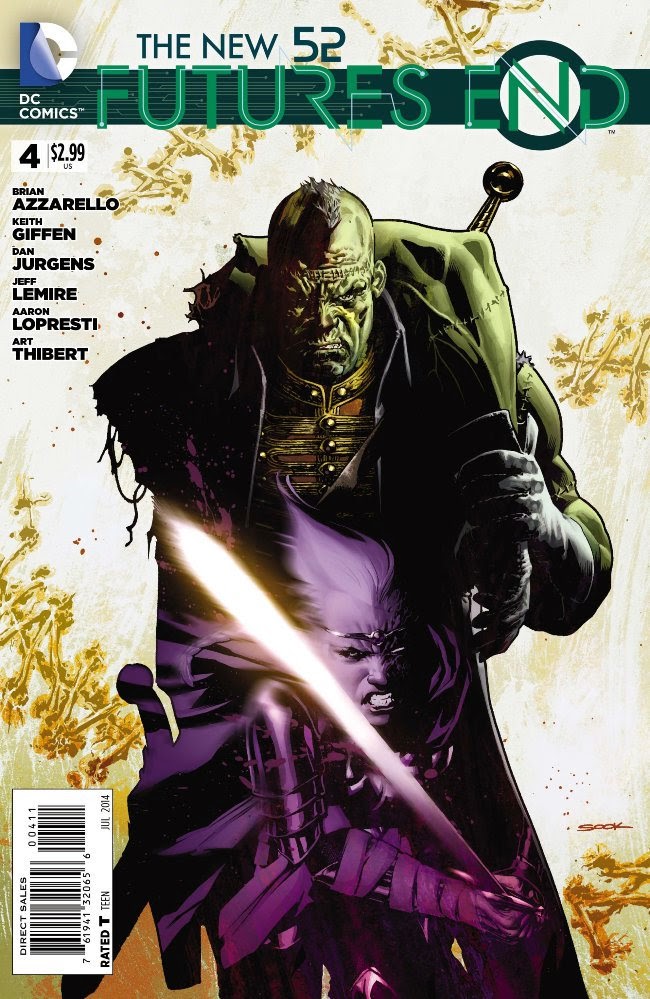 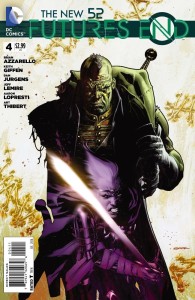 Five years in the future, the heroes we know and love are scattered to the winds, leaving behind a scarred planet about to experience the worst threat it’s ever known. From the far future comes Batman Beyond, but he’s not alone as Stormwatch, S.H.A.D.E., Grifter, Mr. Terrific, and more begin to see the threads come together. And coming together is exactly what has to happen to fight the future threat.

Once upon a time, DC put together what I still feel is one of the strongest stories in its history: 52. Spinning out of Infinite Crisis, the story of a year without Superman, Batman, or Wonder Woman took serious risks in shifting focus to the likes of Elongated Man, Renee Montoya, Booster Gold, Steel, and Black Adam. And at the helm of that adventure were the company’s top four writers of the time, working together on every single issue to tell a story that took disparate strands and wove them into each other flawlessly.

It was magic in a bottle.

Does Futures End have that same magic? It might be too soon to tell, but as the infamous eight ball likes to say, “Signs point to yes.”

Genuinely, issue #4 is the breakthrough chapter for me, as we begin to see groups of characters coalescing, and I can start to piece together each writer’s distinct voice with their subjects. Lemire’s deep love for the quirky and weird comes through wonderfully in his match-up of Frankenstein with Amethyst (and surprise cohort the Atom), and the mission they are tasked with makes me wonder how that will work and giggle with delight in the same breath.

Azzarello’s assembly of bad guys (with one very new and yet already familiar Plastique among them) seems like another odd match-up, but one I’m already hooked on just a few pages in. Jurgens sets up a really compelling confrontation between the retired (and in hiding) Tim Drake and this new Batman waiting in the wings, with Lois Lane hot on both of their trails.

And this is also the first issue that I’m starting to see the point of Grifter, as Giffen has genuinely left me wondering if Cash Cole really is seeing what he claims to be seeing, or if he isn’t just a crazy serial killer. Apparently, I’m not the only one who had that idea pop into his head.

There’s a lot of characters at play, and yet each one is given space for very real characterization to the degree that I genuinely like (or dislike, as is intended) each one. In only 20 pages, with upwards of 12 major characters, that’s a pretty strong feat.

Aaron Lopresti contributes a really strong issue, particularly in his handling of the Frankenstein-Amethyst sequence, blending that perfect sword-and-sorcery style with the true techno environment of S.H.A.D.E.’s headquarters. It makes me really want to see Lopresti back on the rotation, particularly as that particular trio heads into deep space. The contrast he’s providing really ups the fun factor in a book that could otherwise fall strictly into doom and gloom.

And while I normally don’t call out cover art, since it’s so widely seen and available months before review date, I have to say — Ryan Sook’s cover with Frankenstein and the Princess of Gemworld is nothing short of magnificent. If there’s not an art book of these covers prepared come completion, DC will truly be leaving money on the table.

A really cohesive issue pulling together the most disparate heroes — and really, writers — imaginable, Futures End #4 is the moment this story really rocketed into high gear for me, and made me honestly desperate for the next one. And frankly, that’s exactly what you want out of a weekly book. Next Wednesday can’t come soon enough.