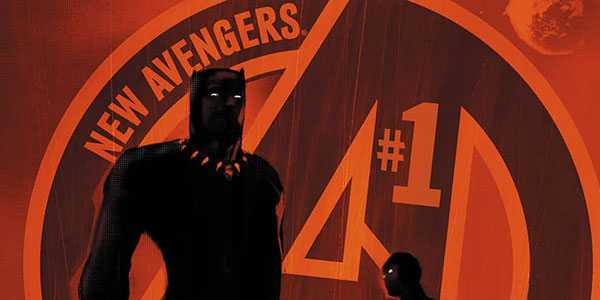 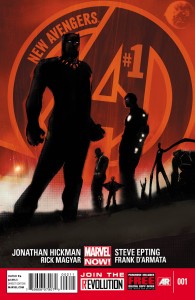 New Avengers is the perfect complement to The Avengers. While the latter glorifies and celebrates the Earth’s Mightiest Heroes, New Avengers shows us that there is always something brewing deep underneath when only a handful of people are given so much power. I can’t believe that these two titles are being written by the same person. They feel nothing alike aside from the fact that they are both astounding. I’m surprised at how quickly any one of the heroes can feel and be perceived as a villain and how thin the line truly is.

Most the first issue centers on Black Panther and his struggles with the group dynamic. Hickman really showed off just how great of a character Black Panther can be. For how many Avengers comics I’ve read over the years, I really don’t have a solid background with the Black Panther mythos because it seems writers only give a few of the same stories about him each time. His quick conversation with N’kono about the young man’s father’s grandfather was so interesting that I got sad when I realized I wasn’t reading a Black Panther solo title, and that this probably won’t be revisited. Throughout the issue, his words are inspiring and full of wisdom and he was portrayed exactly how I always imagined him: a true king.

The only real gripe I had with the story was that I wasn’t quite sure where the arc was going after I read it. New Avengers feels more like a #0 issue. With the heavy emphasis on Black Panther — as well as how the comic ends — I couldn’t help but wonder how much of this story was really necessary when the main arc begins. I’m curious if more of the issues follow this outline with a focus on one of the members of the roster, or will it revert to a more traditional telling when the first arc really ramps up?

I enjoyed the art. I think it will grow on me as the series continues on, but at this point I wasn’t overly impressed. The action shots were bland and so were many of the facial expressions, including one panel in particular where Black Panther and his ally are looking over two of their fallen allies from battle. If you were to remove the dialogue box, you would not be able to tell what emotion they were feeling at all. Their faces are completely emotionless (Black Panther naturally gets a pass on that) and their body language is normal like nothing happened.  The art wasn’t bad by any means, but it didn’t suck me in like I was expecting it to.

New Avengers is another success to come from the new number 1’s and talent shuffling of Marvel NOW! Combining this title with its counterpart, it is safe to say The Avengers are now back on the top of the totem pole at Marvel.

Where they should be.