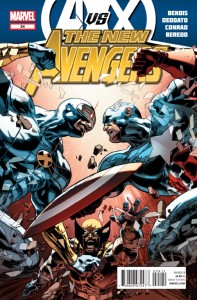 Avengers Vs. X-Men is here, and with it, the first tie-in issue. It is completely logical that this book would tie-in to the AvX main series, being that every single member of this book is a part of the conflict but what surprised me with this issue was how well it tied in. In some events in the past I’ve been disappointed by how well tie-in issues integrate themselves with what is actually going on in the main event books, so thiswas a pleasant surprise for me. Bendis gives us a glimpse into the locker room huddle on the Avengers side of the field before the epic moments in AvX #1 that kick off the true battle royal. He also goes deeper into the character that has been the primary New Avenger since the book launched: Luke Cage. Luke has more at stake in his life than many other Avengers and it was great to see him and Jessica hashing out just how muddled their situation has become. The gravity of the consequences of being an Avenger has on these characters lives is laid out in full in this issue and Bendis does a great job of not glamorizing being a super hero. These people go to war daily and I commend him for not mincing words. The Luke Cage/Jessica Jones situation brings another level of impact to the AvX conflict in that this isn’t just about Avengers Vs. X-Men in a fanboy satisfying pillow fight: this is a war and there will be casualties. Heroes will be injured and may die at the hands of other heroes and you can really feel the weight of that in this issue.

And a huge reason why the weight of those concepts comes through is the artwork of Mike Deodato. Deodato is a rock-solid talent in Marvel, able to draw the big splash pages with tons of characters and also those quiet character moments between a 3 person family unit. Deodato’s work in New Avengers #24 heavily outshines the artwork in Avengers Vs. X-Men #1 and this book of a high enough quality that it feels like it should just be AvX #2 rather than a tie-in. This issue is an example of an artist really locked in with his characters and knowing how to make the story shine.