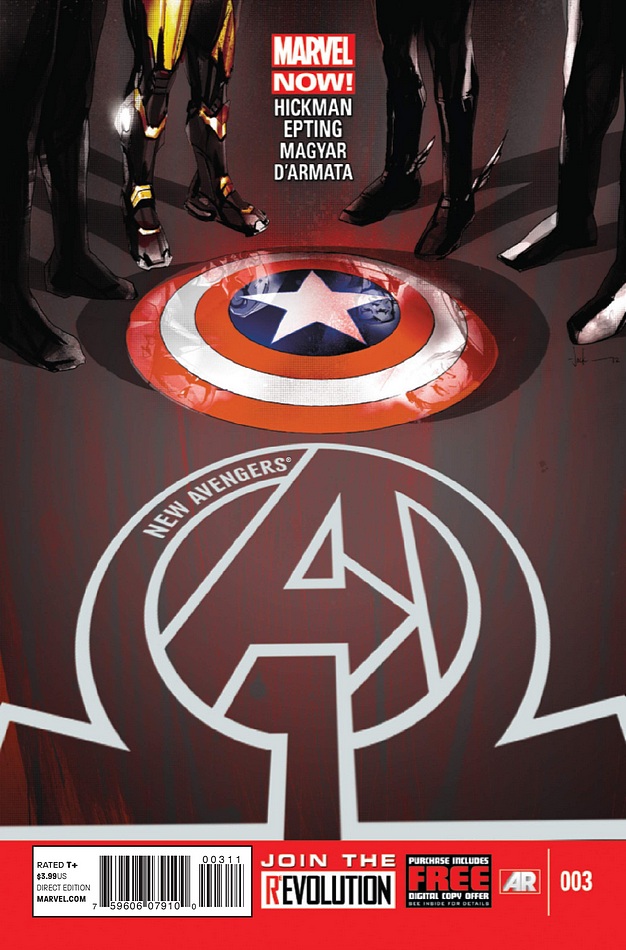 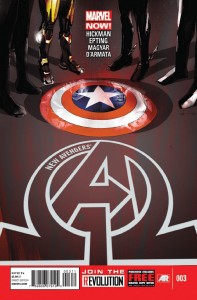 The issue with a little bit of everything. A new member is brought in, the gems are finally brought together, and one of the more shocking endings to a comic I have seen in quite a while.

I never found myself bored at all through the read. Every few pages the story would shift focus to a new character or event, but still managed to keep the general narrative flowing throughout the entire comic. While the whole story is solid, the beginning and introduction of the newest member of the Illuminati stands out above the rest. One of Hickman’s greatest strengths is that he can inject so much emotion and depth into characters with only a few words or phrases. Professor X is only in 1.5 pages (6 panels), but you are flooded by his pride, sorrow, regret, and sympathy in such a short amount of time.

The thing that makes the book so exciting isn’t exactly you are seeing, but what you AREN’T seeing. Every time there is a conversation between two characters, you can’t help but wonder what the other members of the Illuminati could possibly be conjuring up or speaking about behind the scenes. The uneasy alliance is constantly tested and already some very strong bonds have been broken between these characters, which makes every conversation or every interaction extremely exciting to watch unfold.

If you are looking for action, then you have come to the wrong place. There only punch thrown through the whole issue is Namor taking a swing at Captain America, and even then it ended quickly. There are quite a few pages that are just pure 4×4 box panels filled with straight dialogue. No frills, no outside the box layouts, just powerful men in a war room talking.  It’s about as close to a political drama that you will get in the comic book world right now.

Oddly enough, this may be one of Hickman’s more difficult titles to write, but Steve Epting’s easiest to draw. Most of the issue is up-close shots of our heroes or a larger panel with a few of them together listening to someone. There is very little Epting can do to make his work stand out with the material given. He was able to spread his wings a bit in the middle of the comic, and the few action panels that were in the comic looked impressive. The art was heightened by the inks and colors selected as well. The use of heavy shadows on the members of the Illuminati visually show the immense amount of responsibility and huge burden on them.

New Avengers is one of the most unique books coming from the Big Two right now. It’s not often that you see Marvel or DC take such a risk on a concept like this for one of their more popular franchises. That said, it is a heavy read. The book isn’t for everyone and after issue 3 it looks like this is how the comic is going to feel from here on out. Personally, I can’t get enough of New Avengers and look forward to where it goes in the coming issues.