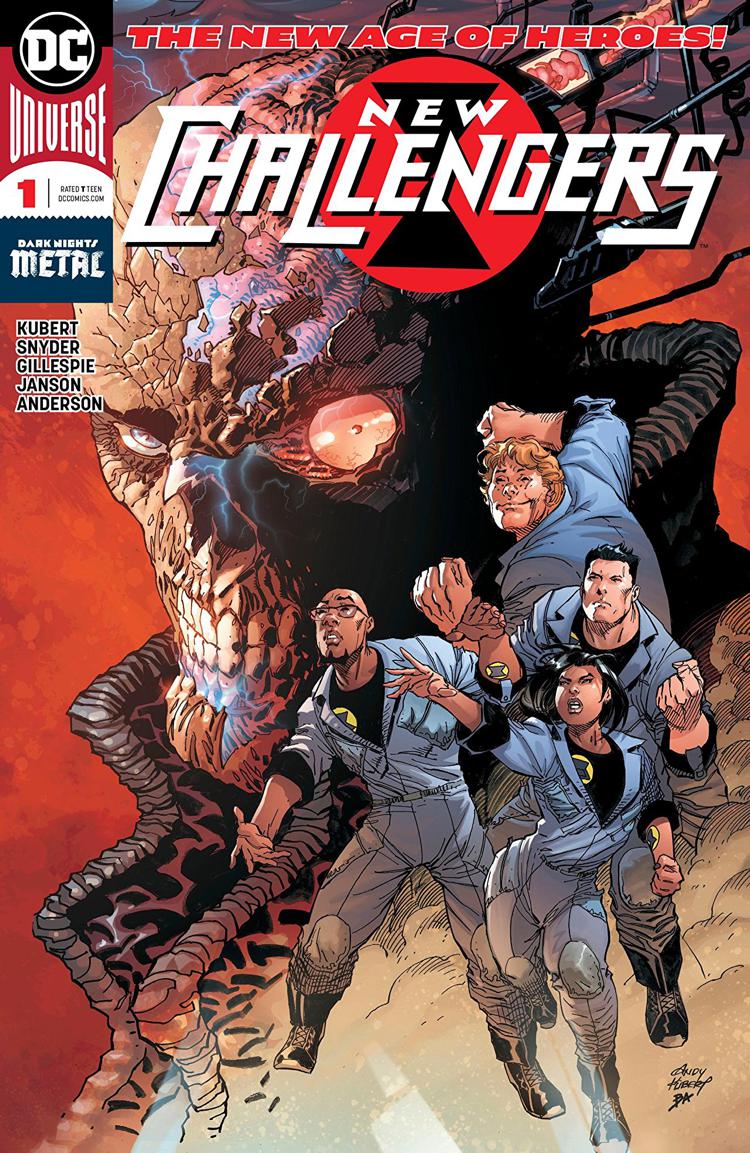 “The New Age of Heroes” got my attention with The Terrifics, but it locked my attention in with the announcement of a new Challengers of the Unknown series. I’m not sure if I imagined it discussed that way or if something more nefarious has transpired, but by the time this issue hit the stands, it was simply New Challengers #1.

Written by Scott Snyder and Snyder protégé Aaron Gillespie, with art from the reliable Andy Kubert, New Challengers #1 is inked by Klaus Janson, colored by Brad Anderson, and lettered by Deron Bennett. It opens with a biplane in a lightning storm above the Himalayas and gets even more dramatic from there.

We don’t all of the get names for the crew dubbed Challengers until after the staples in New Challengers #1, but I have a feeling we’ll be learning a bit more about them as their mission unfolds. That mission is delivered by a man calling himself “Prof” and lecturing the quartet on the legacy of the Challengers of the Unknown (there it is!).

This is a tale that definitely is a sliver of something bigger. Anyone coming into the story cold will find intrigue and adventure, mystery and death, but the issue finishes without really giving readers a complete story or even a character to truly latch onto.

The best bet for the latter is Trina Alvarez, an holistic practitioner from the Narrows of Gotham. She narrates chunks of New Challengers #1 to keep the story on pace with the art, but doesn’t ever really evolve to more than a doorkeeper. Again, there’s more to come, but the hook is left for Kubert, Janson, and Anderson to deliver.

This is the closest Andy Kubert’s art has come to reminding me of his father – Joe Kubert – in quite some time, and the story leverages the younger Kubert’s strengths with mystery, technology and exotic organic material all jammed together. The foldout cover delivers the promise of dinosaurs to come, and the final scene with the new Challengers brings a giant beastie – all to Kubert’s strength.

I appreciate Kubert’s craft, but some of the art really feels like it wants more room to breathe. He puts a lot into every page, with some panels barely larger than his pencil lead could have been. Major kudos to Janson for hanging with Kubert, inking all the lines, and adding true, rich blacks that ooze mystery into a story with more than a little mystery. Unfortunately, some of that mystery is so fine and so detailed that it becomes just a bit too small to be meaningful on a first read. Not to worry, though, this comic is solidly re-readable.

Deron Bennett is a solid choice for letterer, adding in classic comic book sound effects while wedging in word balloons and captions around Kubert’s delicately detailed art. That said, “WOM WOM” as a sound effect is all well and good for a throbbing, vibrating, mystery object, but the jagged edge of said object positioned too close to a chin and pointed at the mouth makes it look like Prof’s taking a bite and “WOM WOM” has to be separated from “NOM NOM”.

Not enough here to elicit a deposit of my attention, as the four primaries don’t even lock their names in my brain by the end of the issue, but I’m a sucker for the Challengers concept. I’m in for the long haul, confident that Snyder has this story planned for a slow burn. The verdict is out on this one. There’s stuff here, and the promise of uncertainty that the legacy of the Challengers of the Unknown should evoke is present. I just wish it had a little more heart.