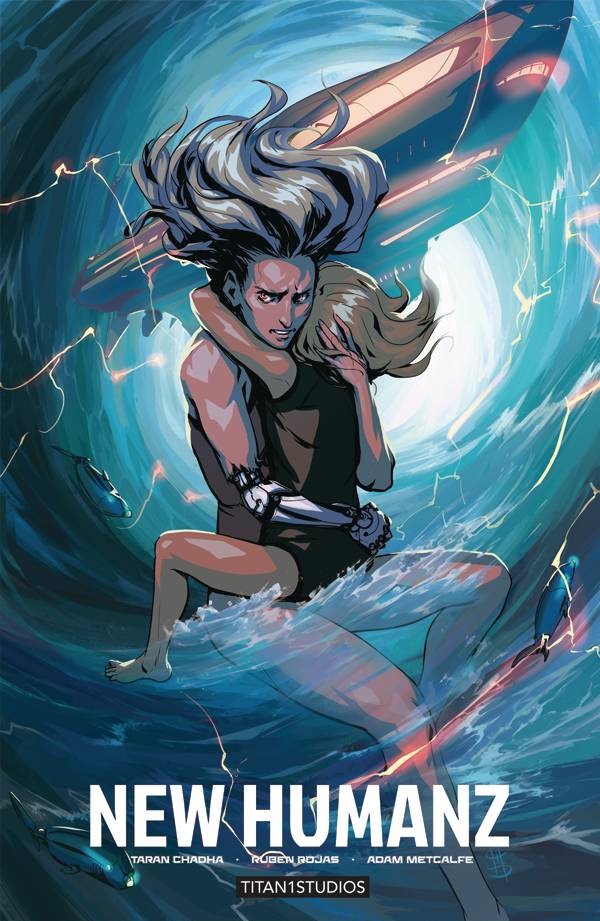 Aristotle wrote that “the whole is greater than the sum of its parts.” Part of the human experience is the fact we are more than a grouping of organic or in some cases inorganic body parts. We learn in this first issue of New Humanz that it can be hard to remember this when so much of a person has been taken from them.

New Humanz is set in Titan1Studios’ Relativity Universe and is about a mother and daughter struggling to maintain their humanity in a world and time they weren’t born in. Taran Chadha gives us a solidly written story that flows very well. Though the story is full of action, suspense, and a futuristic world the real heart of the story is Riley and Sadie. The mother and daughter relationship is first given life for the reader in the opening pages. We see them laughing together, we watch Riley trying to help her daughter conquer fears and we see them cling to one another when danger comes. It’s this loving relationship that holds them together through the terrible events that they endure and it’s what will keep the reader coming back as well. As the reader is taken into the future with them we discover that it is an interesting world of typical futuristic tropes. Advanced technology, cyborgs, and robots are abundant but this world has an interesting history that is alluded to by Riley. This issue leaves a boat load of unanswered questions but not too many to confuse the reader. As long as the next issue begins to clear up some things, we are in for an interesting ride as mom and daughter struggle to retain their humanity.

Ruben Rojas’ artwork in New Humanz is very good. It fits the story well and really captures some tender moments between mother and daughter. He draws them as having a close relationship with smiles, but not without their differences. At times he is able to capture the moments when there seems to be a gulf between them. Riley is loving and protective of her, as any mom would be, and it shows in the art. The tender way that Rojas draws Riley with her arms embracing her daughter during the lake incident says it all. In the latter half the book a lot of time has passed and the two look different. They are drawn sadder, and colder. The colors are flatter and not as vibrant as in the beginning especially the skin tones of Riley and Sadie. Overall, Adam Metcalfe’s coloring on this issue is good and communicates the mood of each scene. The inking works very well and more than anything else it is what gives the artwork it’s depth and textures. There are a number of full and half page layouts throughout the book that are done beautifully. While some bigger layouts like these can sometimes lose the characters, the layout of each of these draws the eye through the image and maintains focus on the subject. All in all it’s a good combination of artwork that helps communicate to the reader the wide range of human emotions the characters are struggling through.

Overall this is a solid beginning to a new series. There is a lot of emotion in this book and should prove to the reader that although they may not feel human Riley and Sadie are still whole. This book is a must read if you are looking to start a good story with strong female characters and a futuristic setting.