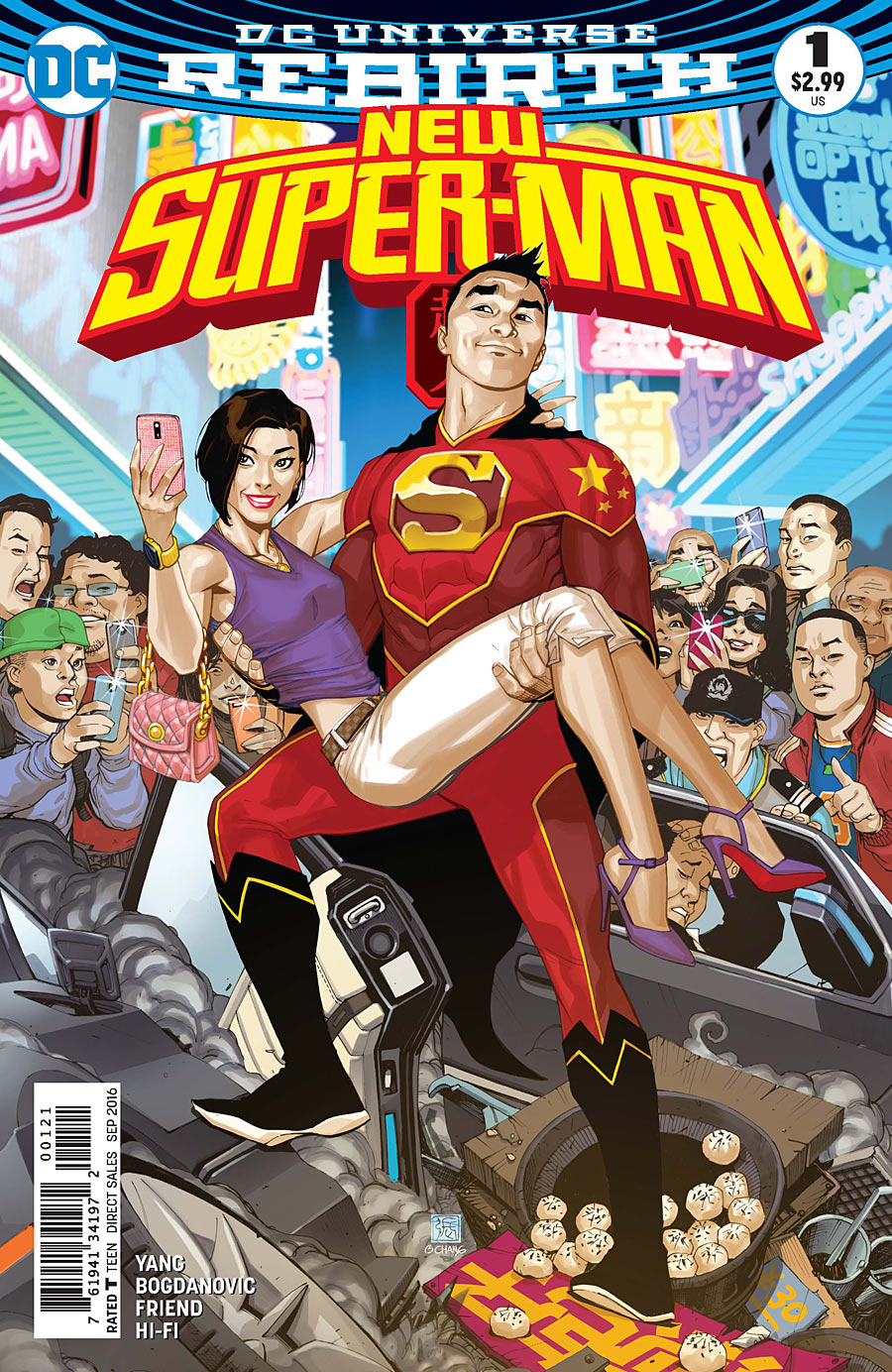 Kong Kenan is a bully. And as the son of a Shanghai mechanic obsessed with conspiracy within the Chinese government, you’d think he’d be the last candidate to be the Ministry of Self-Reliance’s new super-hero. But you’d be wrong. Will he stand for truth, justice, and democracy? Or will he be the pawn his father fears most?

As a new concept within the DC Universe, a Chinese Super-Man is a pretty fascinating area to explore. Superman is so much a product of the Jewish American immigrant experience of the 1930s that it’s nearly impossible for me to take that concept and apply it to 2016 China in my head. And I hope, as the months go on, the reason will be become startlingly clear.

What it means to be a Super-Man in 2016 China is radically different than any conception of Superman we’ve known so far. To succeed as more than a parody or shadow, it must.

In some ways, I think we’re already seeing bits and pieces of that. Kenan comes not from wealth or privilege, but out of a family practicing the sort of democratic activism that would, oddly enough, mirror the socialist action of a 1930s Superman. Vastly different in political scope, both scenarios seek to redress the inequities of the era in their own time. The only difference? I’m not sure Kenan believes in it so heartily.

I do see how Yang is setting the New Super-Man up to be a young firebrand, and possibly a foil to the communist government that birthed him, but it’s slow-going in the first issue. As a white American, I’m not sure I’m inclined to see our heroes as aggressively self-serving as Kenan appears to be at first take, but I wonder if that isn’t the point.

A Chinese immigrant to the States, and certainly a Chinese citizen in the People’s Republic, is going to have a radically different viewpoint of these bright and shiny protectors we trot out of our American mythology. And in that sense, it strikes me that New Super-Man very well could be an intersectional piece between interpreting an American concept hero through the lens of Chinese culture, and Chinese culture interpreted through the lens of the classic hero.

Bogdanovic and Friend deliver a fun and light first issue, keeping the layouts fast-paced in the intro and toward the end of the story, when Kenan actually receives his powers and comes up against his newest colleagues. The line work throughout feels a little rough for my personal taste, although Friend takes great care to keep the inks as crisp and sparse as possible. The issue doesn’t suffer overcomplicated line, but it also doesn’t radically stand out in terms of detail.

Hi-Fi’s color renderings are basic, but mostly shine in the concluding pages with the introduction of these four-color heroes and the explosive creation myth we get deep within the Chinese government lab. All three artists work in tandem to showcase a city environment that is orderly and clean, even in its more historic districts, and that goes a long way toward adding that metropolitan flavor to this New Super-Man that our American version enjoys.

As an introductory issue, New Super-Man #1 does a good job of setting up the characters, motivations, and scenario behind the development of this new breed of government hero. My hope is that as the months go on, we’ll get to see more of the differences between Kenan and his American counterpart Clark, and not simply develop a second universal Man of Steel. The cultural differences, as well as Kenan’s own personality, are far more interesting to me than just seeing another Superman on the racks.