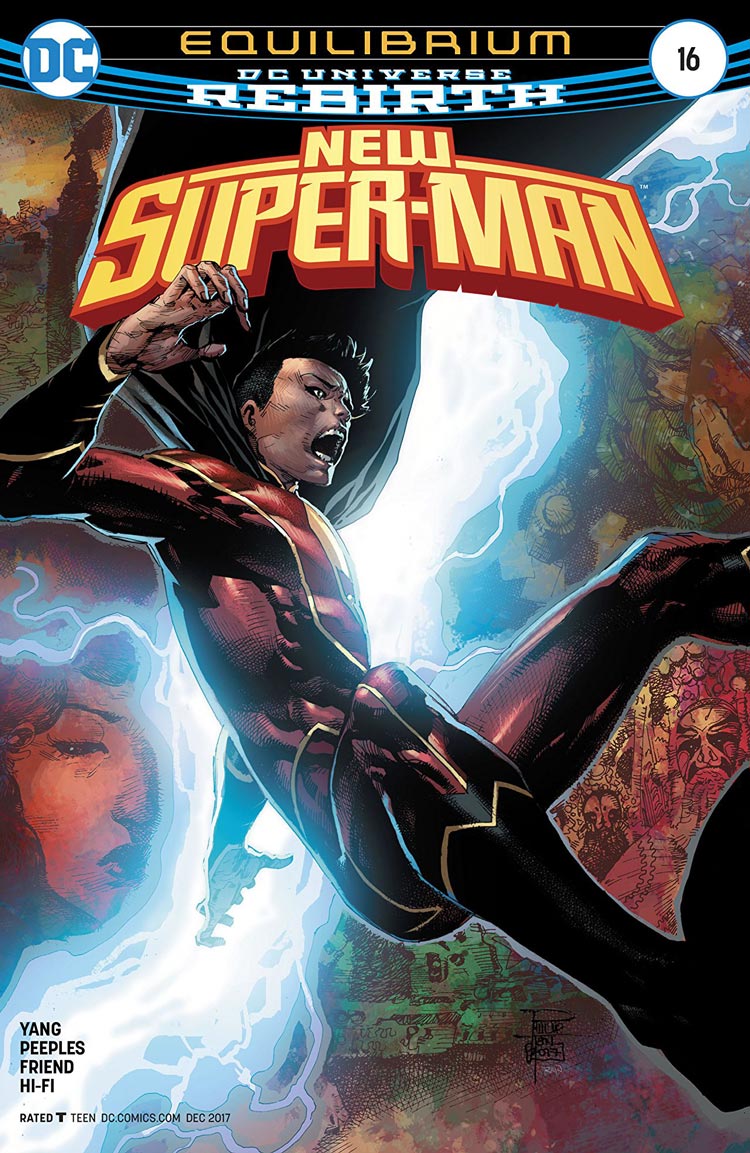 In the midst of his fight with the Suicide Squad, Kenan Kong finds himself transported to a bizarre version of Gotham City in the 1930s, where he meets the All-Yang!

This issue opens with an extended dream sequence that is worth the price of admission all on its own. It opens on Kenan Kong, the Superman of China, trapped in a strange version of Gotham City in 1937. He was brought there by the All-Yang, in the guise of the sinister caricature of a Chinese gangster from the cover of Detective Comics #1, from March of 1937.

That, of course, is the key to unlocking this whole sequence, which serves not just as an in-universe commentary on racial stereotyping and Western imperialism in China, but also as meta-textual discourse on DC Comics as an institution.

Action Comics #1 may be the most famous comic cover of all time, and New Fun may have been the first comic published by the company that would become DC Comics, but Detective Comics #1 is the genesis of the title that would give the company its name, the comic that put the DC in DC Comics. And the cover for Detective #1 has always been an embarrassment, whether the company wished to acknowledge it or not.

The art in this sequence drives home the point by “reverting” to the Golden Age style of the 1930s. The characters and backgrounds are drawn in a more simple style, while the coloring is mostly flat, with some effects applied to make it look like an 80-year-old comic.

At the same time, both Kenan and All-Yang are drawn and colored in a more modern style, a juxtaposition of old and new that throws the characters’ commentary on their surroundings into sharp relief.

In this dream sequence, Kenan is surrounded by yellow men with buck teeth, who speak with yellow-tinted word bubbles that are perhaps intended to evoke the Yellow Kid, the original comic strip character. Kenan is so unfamiliar with racist stereotypes, and the men look so deformed, that he initially thinks they’re goblins before All-Yang teaches Kenan to use his x-ray vision to lift the veil and see that they’re a cartoon depiction of Chinese-Americans. “You’ve just seen through an illusion created to justify over a century of brutality,” All-Yang says.

This comic acts as an indictment of DC Comics’s racist history. All-Yang is a villain, and his motives are suspect, but his point is valid: As much as Slam Bradley, the racist cop who beats up Chinese-Americans for fun, or Von Holtzendorff, the Geman officer introduced later who loots Chinese artifacts for personal profit, the sorts of racist caricatures that DC Comics casually traded in throughout its history are and were a form of oppression. They formed a part of the cultural landscape that made it easy to dehumanize and marginalize Chinese-Americans, and indeed all Asian-Americans.

This issue adds further to the moral and political complexity of New Super-Man as a title. We’ve already seen Kenan face down pro-democracy radicals, pro-government super teams, and now anti-Western conspirators. At every stage, New Super-Man integrates political questions while resisting the temptation to make any one viewpoint the Bad Guy.

It’s impossible to read this issue and say of All-Yang “Well, this is just a villain that we’re supposed to find repugnant and disagree with,” because we recognize that his point about the evils the West has perpetrated against China throughout the past few hundreds of years is irrefutable.

To the extent New Super-Man expresses a viewpoint about the politics that swirl around it, it’s one of neutrality and non-violence (or, at least, purely defensive violence). Kenan Kong has, thus far, stayed fairly neutral on questions of politics, though perhaps more out of intellectual incuriousity than some principled devotion to neutrality.

Amidst the heady discourse that motivates the revolutionaries and conspirators he battles, Kenan remains devoted to protection of his family and friends regardless of any larger questions. It’ll be interesting to see, going forward, if Kenan evolves into a more politically aware hero, or if devotion to those he loves remains his lodestone.

New Super-Man remains one of the most interesting superhero comics being published today, a fascinating take on heroism the likes of which we haven’t really seen before. Every issue is a delight, and this one is no different.