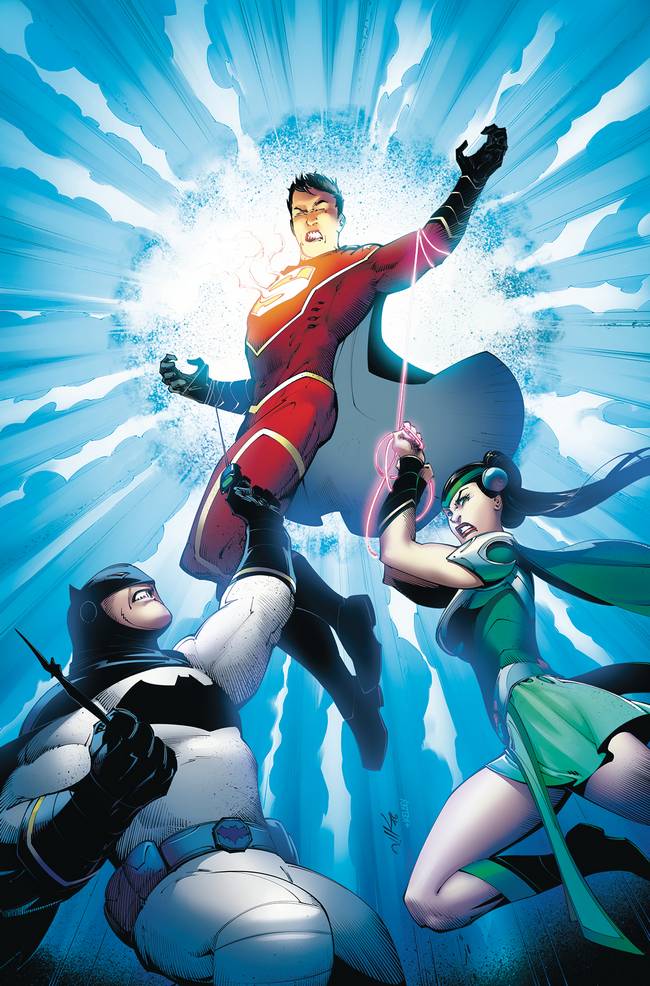 The Ministry of Self-Reliance gave Kong Kenan superpowers, but is Kenan truly prepared for what being a hero entails?

Yang, Bogdanovic, Friend, and Hi-Fi demonstrate that, for the most part, Kenan isn’t ready for the task, but has the potential to become someone who would be. Yang’s writing is impeccable. He has a clear voice and sets up probably the biggest teen jerk with potential since Torque in Valiant’s Harbinger. His writing for Baixi is my favorite, while Deilan is a close second. My favorite line—“Bat-man always does his homework”.

The artwork by Bogdanovic and Friend is spectacular throughout the comic. The penciling & inking duo delivered great design work on characters, especially Bat-man and Wonder-Woman. The artwork throughout the whole issue is honestly very solid. Their collaborative work added with Hi-Fi’s fantastic coloring in pages like the cover or when Kenan is hit by one of Bat-man’s weapon’s by surprise bring to life a spectacle of hues and well thought out artistry. Even panels like the one where Deilan slices through a metal object thrown at her in an almost dreamlike haze of jade stand out as great teamwork amongst the artists.

The collaboration between all four is at its best during the scene where Kenan, fueled by making sure a young girl does not have his tragic backstory, leaps in to help his team despite his own pain while doing so. With of a mix of Yang’s humor, Bogdanovic and Friend’s art, and Hi-Fi’s coloring, they bring about a scene of true idiotic heroism.

“Made in China Part 2” is worth the read. Is it a bit pander-y to the Chinese market? Probably. It’s a big market, I don’t blame them. But it’s also a great work that delves into “What if China made their own Justice League?”. Each Chinese version of a Justice League hero has been what that character means at its core while still maintaining their own personalities. Heck, I’m excited to watch the jerk to hero arc Kenan will go through. I’d say fridging a woman character at first is a bit cliché, but overall, I believe New Super-Man #2 is a good buy.