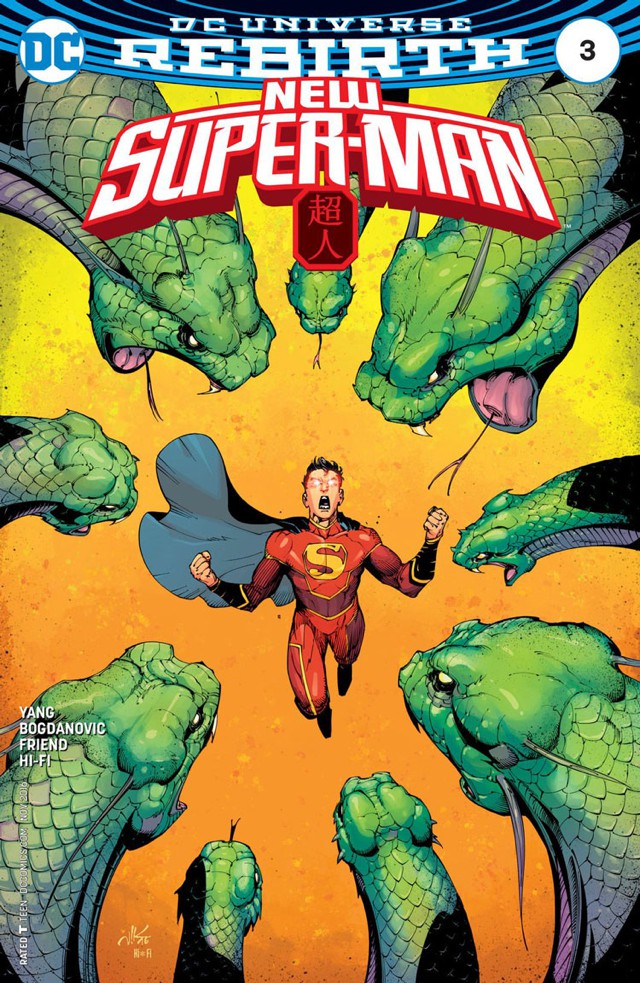 Kong Kenan and the Justice League of China may be part of an organization that is not what it seems, even to them, in this month’s New Super-Man.

Yang keeps up his good work in Made in China Part Three. Yang fleshes Kenan’s character out more and allows him to become well rounded, showing his insecurities about how people view him and his insecurities surrounding his relationship with his father. Deilan and Baixi, again, are fantastic and should win an award for putting up with Kenan’s constant insecure antics.

I love the fact that Kenan is a terrible human being, but I also love the way he has grown already since the first issue. His vast improvement in how he treats his two new friends proves that there is some good under the jerk guise Kenan touts.

Bogdanovic’s penciling and Friend’s inking is as wonderful as the last issue, if not more so. Their design for the crabshell prison is awesome and the panel where the trio bring a perp into the prison is just interesting. The scene where Deilan is carrying a pouting Kenan as they and Baixi go to investigate a particular person is fun to look at. I’ve become more and more of a fan of Baixi each issue (I’ve loved him since the first), so it was also cool to see a certain Bat-man out of his cowl.

Hi-Fi’s coloring speaks for itself, really. Every comic I’ve seen from Hi-Fi has spectacular coloring, and this issue is no different. Dave Sharpe’s lettering is quite good as well, the usage of blue coloring for English words is an interesting way to go about it and makes a lot of sense.

The best scene is the one with the Xiangliu. The usage of a mythical beast of Chinese legends is a really cool idea and I learned a bit about Chinese folklore through it. The rapport between the members of the Justice League of China is hilarious, especially when they make a particularly pointed jab at Aquaman.

The artwork looks true to the legend for the most part, but has its little creative twists like the coloring for it and the choice in heads. I’m actually really glad Bogdanovic and Friend did not go down the creepier, baby head looking route, I’m not sure if that kind of horror would have gone with the colorful and classic superhero atmosphere of the comic.

Made in China Part Three is the best issue of New Super-Man thus far. I highly recommend it, though, you should probably read Part One and Two first.