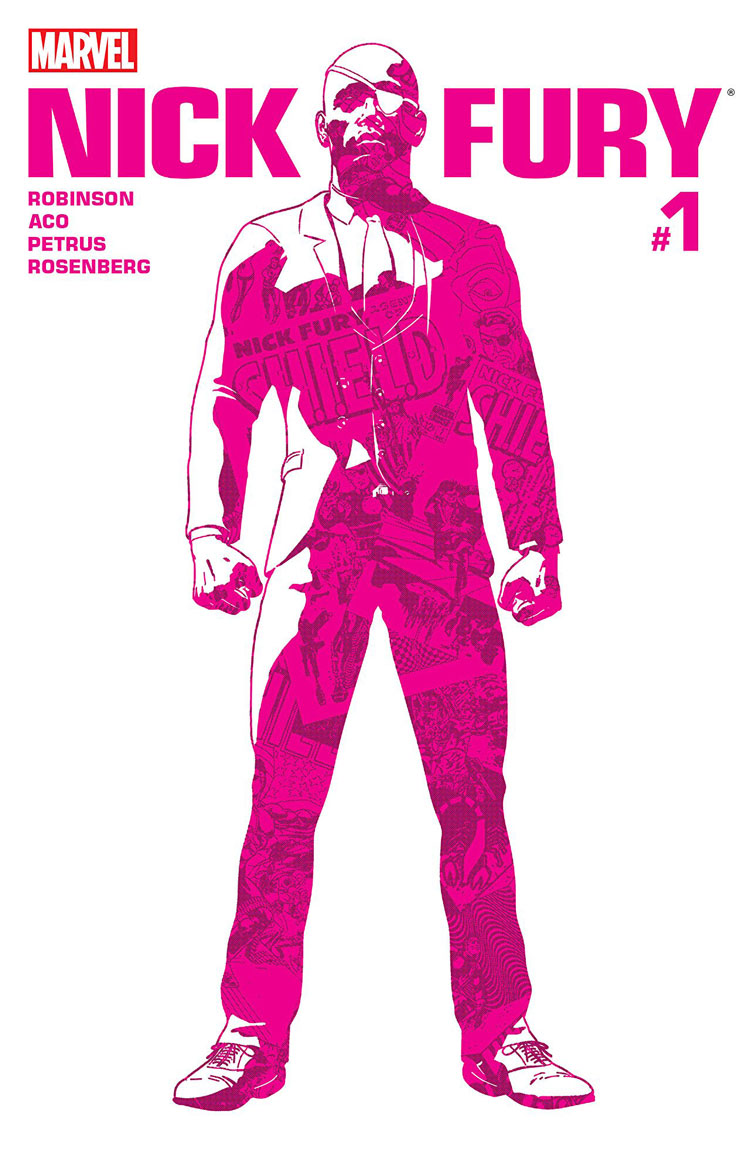 His name is Fury. Nick Fury. And he’s about to fuck you up.

And you won’t even mind. Because it’s the goddamn prettiest and most charming adventure book Marvel has published in years.

There’s no question that Nick Fury is going to be an artist-driven book with Midnighter alums ACO and Hugo Petrus sharing art duties. The former is rolling out his usual brand of exploding panels, giving us moments in action that piece together to form their very own visual narrative. It’s almost like being in a room where everything is flying around you, and you just get to watch it all from the eye of the tornado.

And Petrus is matching ACO’s volatile panel construction with tighter structure, nine-panel in some cases, but using the same kinds of visual cues throughout to keep the book feeling uber-consistent. His Fury is impeccably dressed, utterly gorgeous, and more than a visual match for the ladies of Hydra, who arrive amid this crazy concentric circle-divided double page spread.

Patterns are layered underneath flying objects floating in panels run amok in zig-zag formation across the page — and it’s all you can do not to be transfixed even more by the colors Rachelle Rosenberg is delivering to the book. Not only is she tying the pages of two line artists together in a gorgeous palette of radical Technicolor genius, but she’s giving every moment a heightened sense of urgency and crazy fun.

It’s like having a siren going off in your brain and immediately wanting to sway to the beat of it.

The pacing is dramatic throughout, but what really impresses me most about the storytelling decisions James Robinson lays down is he doesn’t feel any need to overcomplicate or bring Nick Fury back to any sense of normalcy or seriousness. This is pure, unadulterated secret agent fun, and I am so into it.

From the very first page, Robinson captures the essence of Nick Fury as the James Bond of the Marvel Universe with the kind of swagger and humor that we all want from the international super-spy we plan to marry one day. That is, if we survive the experience. Which we won’t, because I can already tell — just from the wild ride of the very first issue — that skin of your teeth is a scenario this gentleman is going to be very fond of.

So, man, they had it all wrong. Forget that other book featuring Hydra this week. Nick Fury #1 is a neon-lit, psychedelic secret agent dream with enough suave patter and glowing good looks to sweep any evil empire off their feet. James Robinson has outdone himself in letting the fun and frivolity back into international intrigue and ACO and Hugo Petrus are an art team that can’t be beat for action, adventure, and enough explosions to fill a big budget box office thriller in just 20 pages. BUY THIS BOOK.