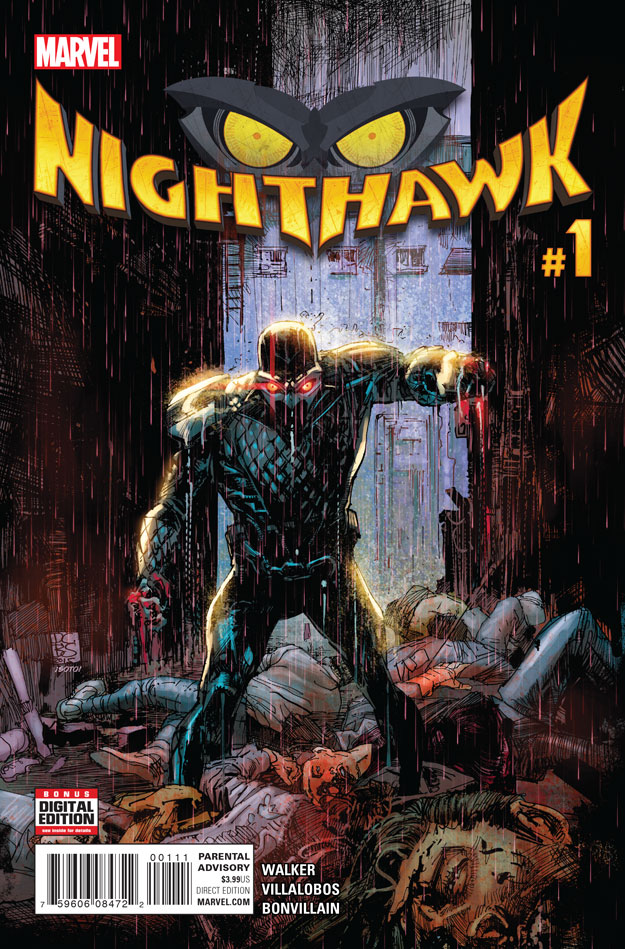 Busting White supremacist heads is one helluva way to start a series.

Nighthawk, Raymond Kane, is not a fan of White surpremacists with buttloads of guns, so he takes them out with extreme prejudice. Meanwhile, someone is carving bodies in the city of Chicago, putting both Raymond and the police on alert. In the backdrop, the city is plagued by racial injustice, a sinister system encapsulated in an intense trial and that is the common thread to Raymond’s current threat.

Holy crap. I had some idea of what to expect with the first issue of this series, but I got way more than I bargained for. Nighthawk #1 is monumental for a lot of reasons, including the fact that a current Black narrative was included that addressed real issues, their ramifications, and the motives of people involved in them. Raymond not only is kicking ass, but he’s the perfect route of exploration for racial injustice. It also stands to be said that this narrative was handled well, which unfortunately is not always the case.

David Walker is pulling about as many punches as Raymond with the storytelling of Nighthawk’s inaugural issue. There are direct and cultural references to police violence against people of color and the violence of gentrification, narratives we don’t typically see especially in the Big Two. Beyond this bold framework, Walker writes Raymond as a character who’s not opposed to violence but knows where to draw the line. His silent protector persona is an interesting addition when compared to the rest of the characters. In fact, Raymond may speak the least of many of the characters comparatively, but this component is executed in a way that highlights his prominence rather than diminishes it. The rest of the story is chilling, from the gruesome actions of our apparent antagonist to the injustice perpetuated by many of the characters. Walker has set up this series to have important cultural ramifications for the landscape of comics and is developing characters who live in a world much like our own.

When it comes to violence, Ramon Villalobos does not hold back. The art of Nighthawk #1 is rough and messy, a wonderful reflection of Raymond’s own stance toward criminals and the nature of the story. In some panels, characters’ bodies or expressions felt off or awkard, but that did not take away from Villalobos’ ability to portray graphic and detailed violence. Tamra Bonvillain’s colors make Raymond’s world feel much closer to ours, which is both amazing and unsettling. Considering the story’s theme, this effect is both important and redolent of the experiences of many Black people. Bonvillain also works with some great contrast panels, such as Raymond recalling his mother decrying his anger and the shower scene. These pages are a great artistic framing in tone and style of these disparate moments in Raymond’s life.

I highly recommend the first issue of Nighthawk for its handling of Black issues and for its departure from much of the Marvel line. I’m glad this team is tackling important and real-life issues within a new series and using them deliberately as the backdrop for Raymond’s conflict. The story threads are tying together well and I’m looking forward to seeing how this creative team portrays Raymond and the world around him.