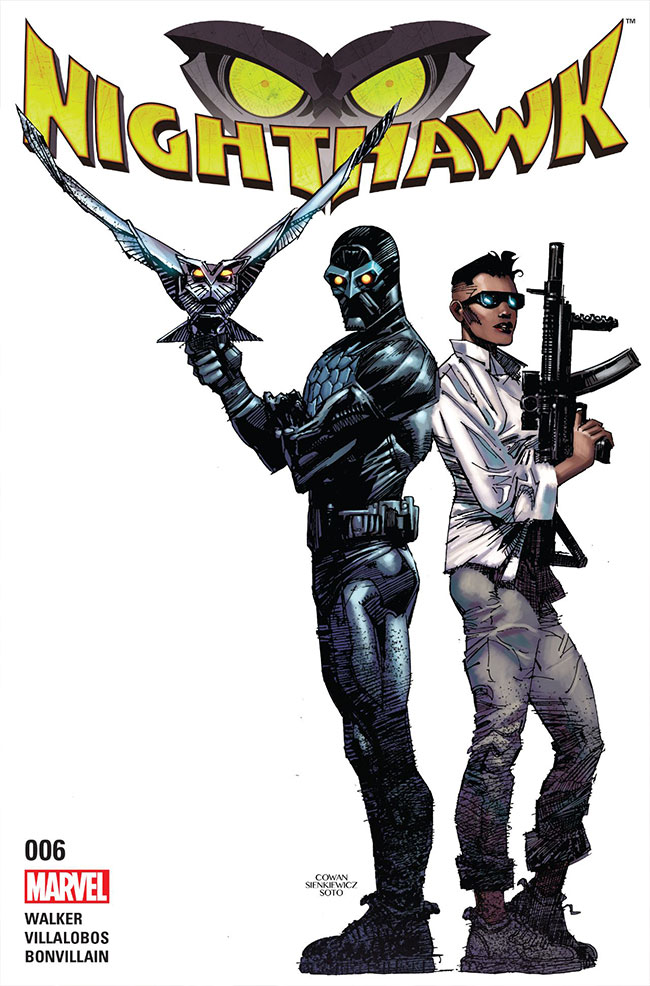 The end to Nighthawk is here, the series that had a violent message to get across that was taken from us too soon.

It picks up immediately after the standoff ending the last issue where Nighthawk, Sherman, and Nina all “formally” meet one another in the wake of Dixon being outed and killed for being the Mole Cop on the Chicago Police Department. Two immediate scenes play out in between the past and present of getting Sherman to safety and the juxtaposition of them work fantastically with the colors working in tandem.

Nina gets the focus on the present scenes with her focusing on the hero antics and getting the injured friend of Nighthawk to safety at the hospital. The moments seeped in the warm colors of the afternoon sun bring about the closing moments of Nighthawk’s and Tilda’s adventures, as the pieces come together and everything comes to light.

Walker, Villalobos, and Bonvillian are a perfect match when it comes to the final issue like they have been for some time now. Tilda remains a star player despite being not physically in the action. Her moments are equally parts informative and hilarious with the contrast of the colors making her pop and draw distinction from Nighthawk and his almost all black attire.

What’s to follow is Walker giving Nighthawk a moment to speak on issues that transcends past the pages of the book and into our lives. It’s breathtakingly awesome how much a character that took justice into his own hands with Chicago speaks on the problems plaguing the city. The speech Nighthawk he gives to the gang members is just one moment that stands as a triumphant victory for everyone involved in this comic.

This title was ahead of the curve and medicine for the times we’re dealing with right now, specifically the way it combines street level justice with very real world problems for Chicago. In these times of gang violence in the streets — with our young black men and women being gunned down by the police, racial tensions sparking anew —  everyday citizens have been feeling helplessness and worry in our neighborhoods and cities. It’s all wrapped inside Raymond’s fists and Yeezy Boosts making a path through white supremacists and racist cops and their mission to spread hate the entire run.

And the search for “The Revelator” races to its conclusion on two fronts… Nina comes to terms with her part in Nighthawk’s “machinations” for the greater good and despite not being a presence for the entire story her innate goodness shines through and her story closes out.

The remaining pages focus squarely on Nighthawk’s final battle with The Revelator and not one punch, kick, or sound effect is squandered. The action is spread out gloriously over a double-page spread where Villalobos and Bonvillian turn into the Wonder Twins of art delivering on all levels from the punches, fluid motions, and sound effects striking throughout the fight.

The fight pulls no punches and ends not with Nighthawk saving the day in typical fashion as you would expect but with a personal, bleak finish for the series that dared to deliver some harsh truths and was unapologetic about the road getting there.

Nighthawk was the series that we needed right now, but not the one we deserved. This swan song of an issue delivered on all levels to wrap up Raymond Kane and Tilda’s adventures of stopping white supremacists, racist corrupt cops, and a serial killer in a city filled to the brim of hate and violence.

I don’t think any series from the Big Two has captured reality quite like Nighthawk has in the way we’re reading about events that hit on a personal level and feel all too real. The message Raymond, and by definition Walker himself stresses to the citizens and us, the reader is profound and like Tilda echoes afterwards… makes you love Raymond Kane no matter how brutal and violent he gets.

The adventures of Nighthawk may have wrapped as he sits on the sixteenth floor of a construction site but, we won’t have to look far because he has his hands in various pockets of the Marvel Universe. Something tells me Nighthawk and his cohort of justice will be making their return very soon.