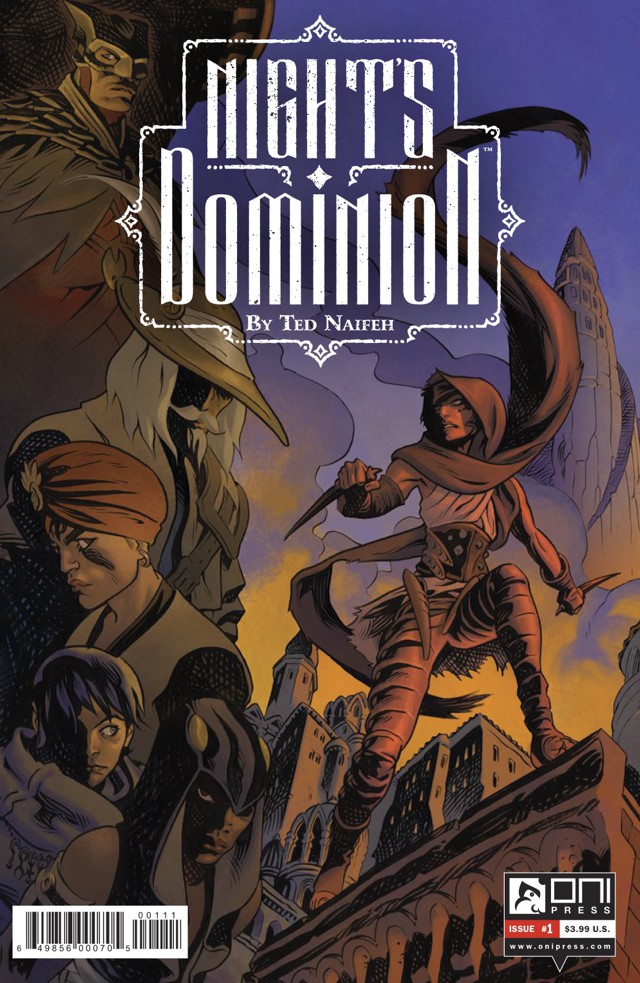 An unlikely band. A grand heist. The Night. Intrigue. Ted Naifeh’s first issue of Night’s Dominion is a winner.

Naifeh handles…damn near everything with this issue, including writing, penciling and colouring. I always find that cohesiveness shows, and the unified vision of Night’s Dominion is evident. There’s never a mismatch in tone between the dialogue and art, and Naifeh is very skilled with his colour work throughout.

This story has a bit of a medieval-Ocean’s-Eleven feel, with a rag tag group of ruffians coming together to pull off one hell of a heist. We’re not in Vegas so we aren’t talking flash and glam, but the setting is an intriguing world of shadow that Naifeh uses to his advantage. The mood he evokes in the first issue is a brilliant setting for the mysterious cast, and I found The Night to be immediately intriguing. The crew Naifeh assembles give him a lot to work with, including some unlikable souls that you’re just waiting to get put in their place. With everyone from a bard to an assassin, it’ll be interesting to see how Naifeh makes this heist unfold with the players he’s put on the board.

On the art front, I really enjoyed Naifeh’s style. His use of shadow is fantastic, and the darkness seems to function as a narrative tool throughout this first issue. Our lack of knowledge about any character is fuelled by his use of shadow and I loved how he cast this entire cast in mystery. We don’t know who they are or what any of them do, and Naifeh conveys that nicely through the art. His colouring evokes a great mood for this series, and the dark palette he employs suits the story nicely. He builds the world nicely through lush visuals and some solid layouts, delivering some fun tavern scenes and some solid action scenes.

Night’s Dominion #1 is an intriguing start to what could be a very nice series as Naifeh rolls on. This first issue definitely caught my attention and I’ll be back, without hesitation. This series feels like a grand adventure in a rich environment and Naifeh impressed me with both his scripting and visual storytelling skills.