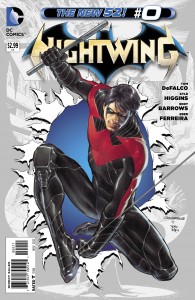 Dick Grayson is an incredible character. He’s been a leader, a sidekick, and a hero in his own right. He’s probably the only character to really be able to fill Bruce Wayne’s shoes as the Batman, and he’s done it twice. He’s been called the heart and soul of the DC universe. He’s also one of just a handful of characters who has been allowed to grow up in continuity, spending his childhood with Batman as Robin, his adolescence as a Teen Titan, and striking out on his own as an adult as Nightwing. In a world of misfits and the maladjusted, Dick Grayson was the one who seemed natural, because the life of a superhero was where he fit, was what he’d known his whole life. You almost couldn’t help but be friends with Dick Grayson. He had a kind of comfort in his own skin that made the people around him feel a bit more comfortable with themselves.

The New 52 has largely succeeded in giving readers a Dick Grayson who still feels like Dick Grayson, which is extraordinary since, as Nightwing #0 makes clear, nearly everything about Dick’s past has been changed. He’s still a circus boy, an acrobat whose parents are killed in a mid-performance “accident” after the circus refuses to pay off a small-time enforcer named Tony Zucco, but the New 52’s compressed timeline means that Dick Grayson is an adolescent when he’s orphaned. His personality is largely shaped by the time he becomes Bruce Wayne’s ward. (And then there are the revelations from the Night of the Owls crossover, which don’t figure directly in Nightwing #0, but inform Grayson’s entire now-extended circus childhood.)

I’ve read Nightwing #0 half a dozen times, and I’m still astounded at the way that classic Grayson elements — the way that the art shows him flying through the air, literally in more than one place at the same time, the way that his sense of justice is driven by his parents’ deaths, but also that he moves on in a way that Bruce never could — are mixed with elements from more recent junior members of the Bat-family. A dash of Cassandra Cain’s ability to read gesture and body language, a pinch of detective work that echoes Tim Drake’s introduction, and a potential mentor at the end who used to have connections to both Cass and Tim.

But, ultimately, somehow, Dick Grayson still works. It all feels right. To everyone except Dick, apparently, who from the start says that “Robin would be anything but permanent.” Which is no surprise, really. He’s outgrown the cape by the time he gets to put it on.