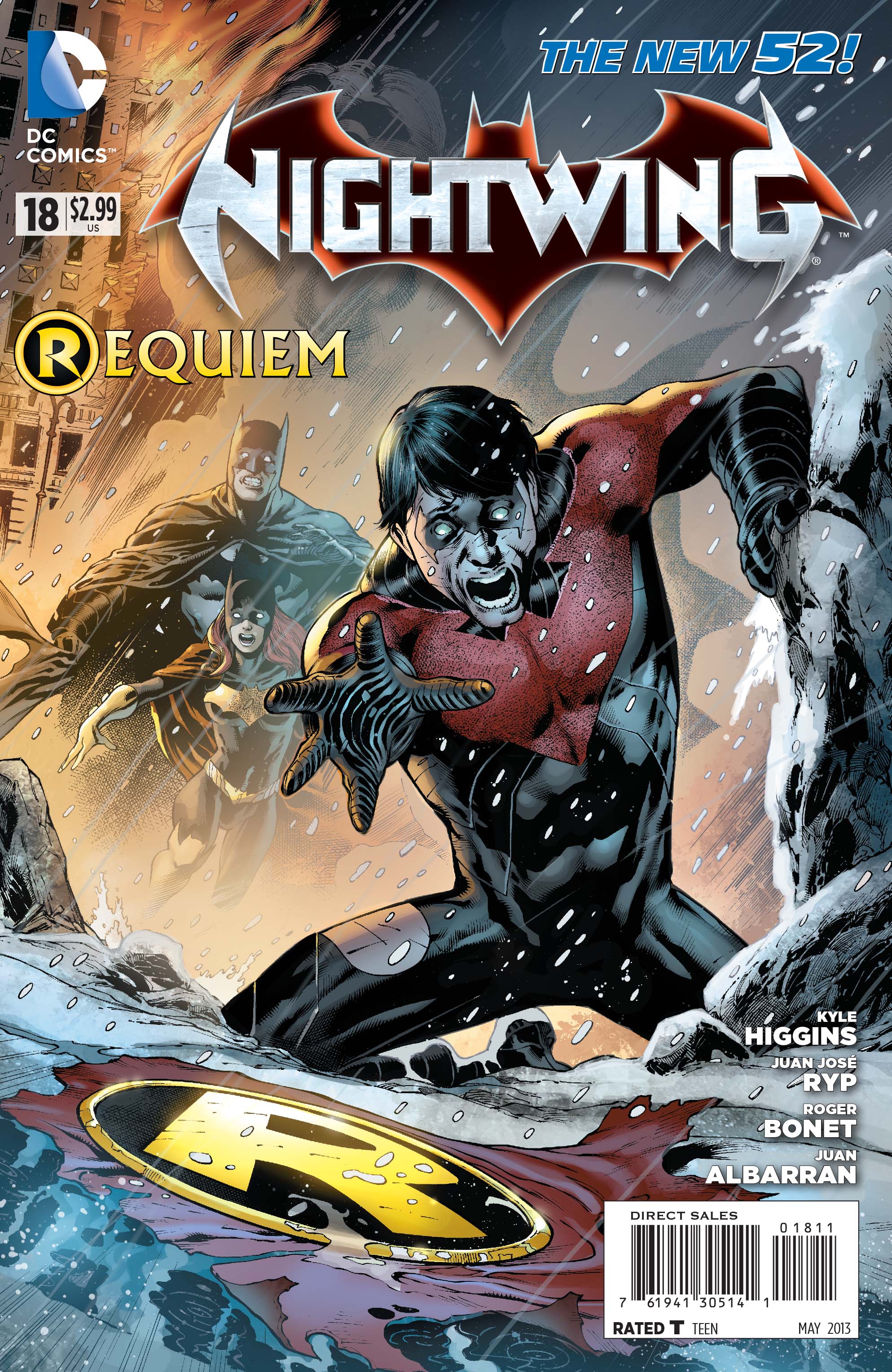 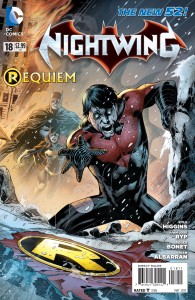 While not a crossover per se, the ‘Requiem’ storyline continues its path through all of the Batman family books this month. After the devastation brought on by Batman Incorporated #8, a former Robin reflects on the recently deceased Robin.

Nightwing has been wrapped up in The Court of Owls, Death of the Family, and now Requiem. When franchise/crossover/overuse fatigue sets in, it’s usually not the main title that suffers any repercussions, but the secondary titles take the brunt of it. This series is an unfortunate casualty of not being able to forge its own path. Higgins is a talented writer, but being forced to tell essentially the same story as six other writers, there is not much that can be done to feel unique and it draws unfair comparisons. Nightwing opens with how almost every Bat-title seems to open with death, despair, and mourning. I don’t think a hero can function in Gotham unless he’s in shambles mentally. The issue goes through the usual places expected in a memorial like this —  there is the cemetery flashbacks, and coffee with a friend to talk about everything. The story itself works, but not only does it suffer from the problems stated before, but the dialogue and actions of the characters feel very hand-fed. The dialogue throughout the issue from everyone is on the nose and leaves little to interpretation or the imagination. Higgins definitely understands Nightwing and his core characteristics and what makes him such a great character, but it was told in such a way that it came off as unimaginative and lacked a certain spark.

Nightwing #18 has a strong second half though. Once the story focuses on the underground auction, the book begins to come together.  Mirror House and the auction that sells off Gotham’s tragedies is one of the best additions to the Gotham from the past few years. It is worked into the story wonderfully and accomplishes a lot of what they wanted to say in the first half. Everything flowed more smoothly, especially the dialogue which had a quicker feel and even was able to inject a bit of humor in the issue. Nightwing’s character is tested and consequently shown off in a way that is much more satisfying than just someone telling him, “You’re a caring man.”

Roger Bonet’s art was a mixed bag. The auction scenes were done beautifully. Even though it became more action heavy during the auction house scene, there was still a very creepy vibe brought forth by the art work and design. His Dick Grayson/Nightwing wasn’t so lucky. The illustration of Nightwing was inconsistent and sometimes rough to look at. At certain points, he looks like a man in his mid-50s, and at others he has the baby face of an 18 year old. The posture of the characters felt out of place. Instead of looking beaten down physically and mentally, they looked lethargic and lazy.

This is one of the titles that is in the most need of a change of scenery. Luckily it looks like it will be, as the character is going to Chicago, hopefully for quite a while, and also getting an upgrade in the art department (Check out the interview with new artist Brett Booth here). Nightwing can be a huge success in the sales and storytelling, but the hero needs to carve his own path and not get sucked into the rest of the Bat-books to simply become “Batman-Lite”