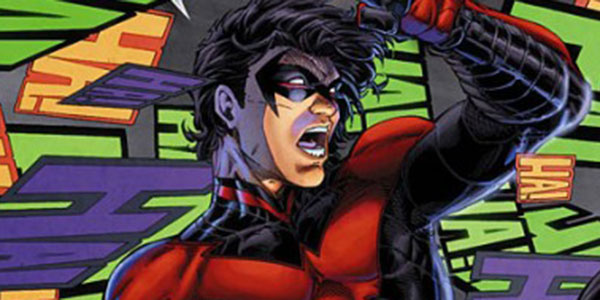 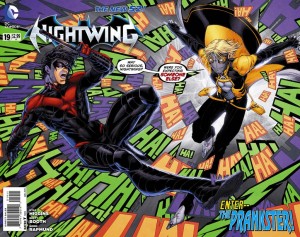 As Nightwing welcomes new art team Brett Booth and Norm Rapmund to the book, Dick Grayson’s status quo changes as well! With the events of Death of the Family and Requiem having shattered his connection to Batman, Nightwing is off on a mission to Chicago to uncover the mystery behind the man who killed his parents. Thought long ago put to rest, Tony Zucco has resurfaced, and Dick is going to find that the Windy City is not as hospitable to heroes and freaks as good old Gotham City.

Kyle Higgins has been on the title since the New 52 relaunch a year and a half ago, but you might not know it by just reading this issue — and I mean that in the most complimentary way possible. Any fan of Dick Grayson (or novice for that matter) could pick this issue up and be getting in on the ground floor of an entirely new storyline, motivation, and surroundings for the first son of the Bat. It’s natural for a title to feel somewhat weighted down after 18 issues, two major crossovers and a fallout issue, but Higgins manages to make this issue an easy jump-on point and feel as light and natural as Nightwing does flying through the air from rooftop to rooftop. This is really Dick Grayson in his element: quick in the midst of action, smart when up against seemingly overwhelming odds, and ever the detective in search of the truth. His renewed youth in this DC Universe is on great show here, and the enthusiasm he exudes from scene to scene is contagious.

That lighter tone by comparison to his mentor is always something that set Nightwing apart from Batman, and not simply in his early days as Robin. In his best portrayals, Dick Grayson is a young man who enjoys who he is, but doesn’t let that enjoyment take away from the seriousness of the job as vigilante. So fitting is this move to Chicago, given that city’s relative lack of extravagant monstrosity in relation to Gotham City, a more fitting home for a more serious mentor. As a Chicago resident myself, I experienced right along with Dick the great glee at riding the El (although I’ve personally never had the occasion to sit along top) and smiled at every small reference to neighborhoods I’ve lived in or near. I hope that sort of realness translates for people who don’t call the Second City home, and come to find this pairing of hero and his new hometown to be as perfect aligned as I do.

The art by Brett Booth is another perfect pairing with the character of Nightwing in itself. Booth’s grace and fluidity on the page is an exact match in tone for Dick Grayson’s effortless physical movement, and layouts throughout the book move the action like an acrobat would fly across the aerial stage. The full page image of Nightwing atop the El train is so beautifully rendered, as is so much of the issue, with backgrounds intricately penciled to give a real sense of the texture of the city. I found myself reading every item of graffiti for clues to upcoming stories, and going back through to pick out architectural details that distinguish Chicago from Gotham City: a certain amount of urban decay and traditional facade that Gotham takes to the extreme, but leaves Chicago feeling quaint and like the perfect hometown for a hero like Dick.

A great starting point for a brand new set of stories, Nightwing #19 accomplishes exactly what DC needed to aim for with their gatefold cover month — not simply an opportunity to surprise (for the cover here doesn’t do much of a job of that, honestly), but to reengage the ongoing reader and grab the new one as well. Higgins and Booth have done that in spades here. Dick Grayson is back at the top of my read pile every month, and I couldn’t be happier!