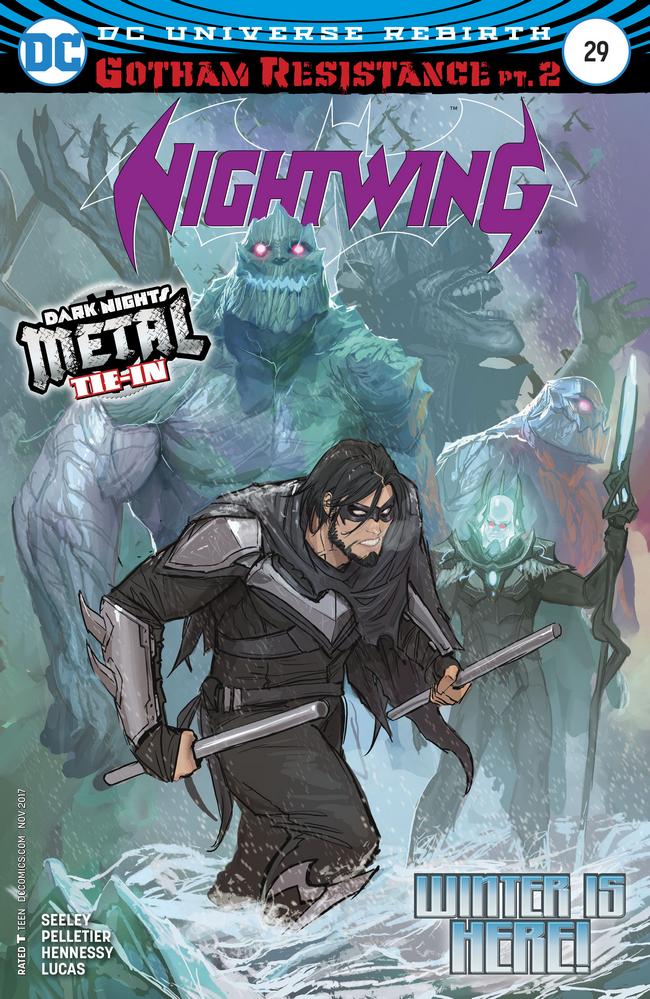 “Are you Batman? Or are you Joker?”

That’s what Victor Fries asks his liberator on the opening page of Nightwing #29 (the second chapter of Gotham Resistance, which as the effects of Dark Knights: Metal #2 begin to seep into the grander DC Universe. In this issue we learn that Gotham City has been plunged into a massive cold snap, thanks to Fries’ amped up powers courtesy of the aforementioned liberator.

That liberator is the Batman Who Laughs, and Nightwing #29 begins to measure out the horror this twisted Batman is capable of.

Despite being a sliver of a multi-title crossover with the Metal event, Nightwing #29 is a strong read. Even if it does involve the Teen Titans, the Suicide Squad, Green Arrow, and references to the Court of Owls, Arkham Asylum, and Simon Hurt. Credit writer Tim Seeley for being able to see and share the big picture of the DC Universe and focus on Nightwing’s place in and importance to it.

Seeley keeps the story moving and fills Nightwing #29 with plenty of action, enough for the dozen or so characters to keep plenty busy. The issue doesn’t completely stand alone, but it does handle the crossover strongly enough to make me want to read more of Metal through the filter of Seeley’s writing. He deftly brings in the myriad personalities and gives them each bits of identifying dialog, without unnecessarily swinging the spotlight away from Nightwing. The dynamic between Nightwing and Damian is as spot on as always under Seeley’s pen, revealing the brotherly camaraderie Batman’s “sons” share.

The frozen wastes of Gotham gives Nightwing guest artist Paul Pelletier plenty to explore and play with. It all starts with the icy confrontation with Freeze and features a slick, metallic (ah, I see what they’re doing!) outfit for Nightwing – thermal armor, that Nightwing describes as Batman’s version of an ugly sweater.

Throughout the rest of the issue, Pelletier again proves that he can draw anything and everything. In addition to a cast of characters that spans no fewer than four ongoing series, plus the redesigns generated by Dark Knights: Metal, Pelletier tackles such concepts as the Court of Owls’ Armory, Teen Titans possessed, and Green Arrow wielding a sword (which he manages to make look like Travis Morgan Warlord without transforming him into Travis Morgan).

Andrew Hennessey’s inks are brilliantly matched to Pelletier’s pencils, infusing the art with weight, power, and darkness inherent in the Metal tale. Hennessey employs a smart range of textures to match surfaces, from iron pipes on background rooftops to splintered timbers of the railroad ties under the tracks of the automated el train. Adriano Lucas’ colors are gorgeous, sharp, and brilliant. Metal as a story is intense, wild, and fun, all of which Lucas captures in his art. To make a quick comparison, if Lucas were physically coloring Nightwing #29 as a coloring book, he’d be using only the brightest markers, not colored pencils, and maybe not even crayons, as those pieces wouldn’t be as bold as the colors here.

Nightwing #29 is a lot of greatness in one story: it’s complete, but steeped in continuity, it showcases the vastness of the DC Universe, and it gives readers a gorgeous invitation to check out Dark Knights: Metal. This is a wonderful comic that bridges the gap between the main event story and the current ongoing adventures of Dick Grayson. Regardless of your interest in Metal, Nightwing #29 will certainly provide a bit of entertainment and is definitely the fun type of comic we all started picking up these things for.