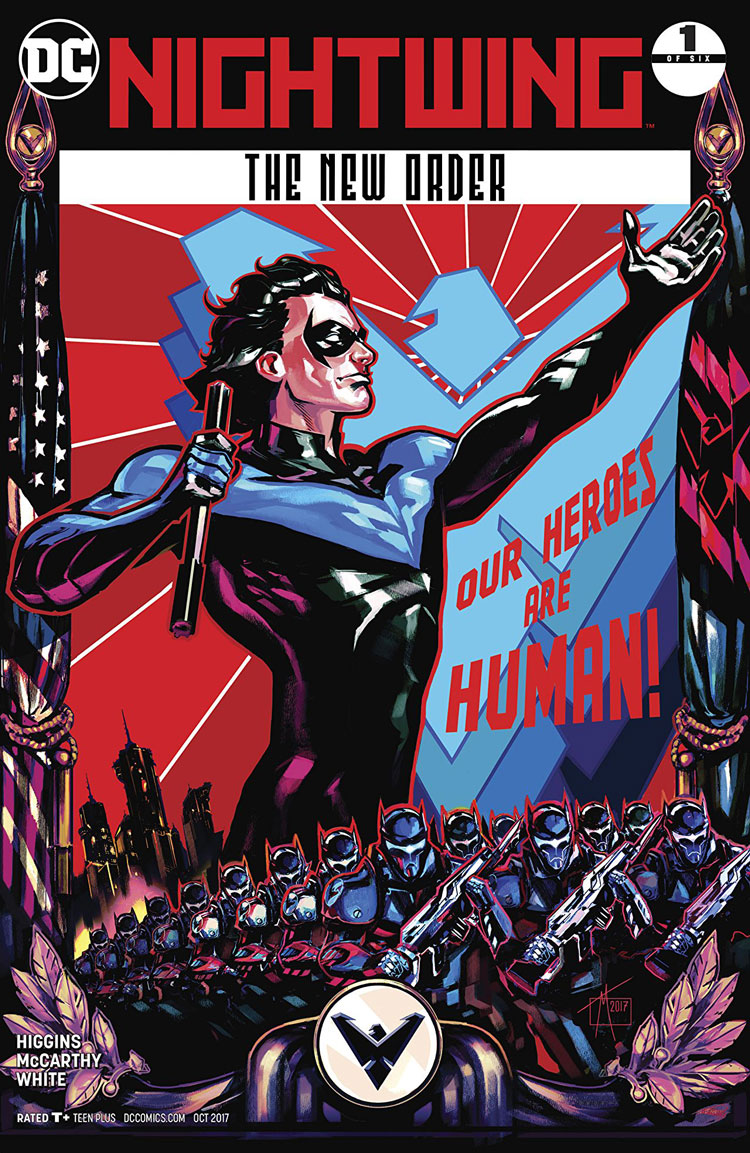 In 2028, Dick Grayson made a decision that changed the world. He detonated a bomb that removed the super-powers from almost every meta-human on Earth — super-villain and super-hero alike.

Flash forward 12 years and Grayson is the head of a police force that subdues and forcibly medicates those who still exhibit meta-human ability. But as conflicted as the man formerly known as Nightwing is, it’s nothing compared to how he’s going to feel as karma shows up at his door in 3… 2… 1…

So, this isn’t going to be THAT review. You know what I mean. There will be plenty of writers today writing that review, the one that compares and contrasts, equates and equivocates, this title to the dumpster fire that’s been on everyone’s mind all summer.

No, we can do better than that.

It’s funny, though, that while reading Nightwing: The New Order #1, it never once struck me that, far from being out-of-character for Dick Grayson to perpetrate mass control over super-human ability, that this book is really the natural evolution of, well, the last twenty years or so of his development on the page.

Think about it. Son of the Batman who became a cop. Who sought out a city nearly as crime-ridden as Gotham (maybe worse) to clean up. Who has consistently made alliances with those who would hunt down threats, even those, like Deathstroke, who were arguably greater threats themselves. Who joined an agency like Spyral to hunt down rogue super-powers and super-powered devices. Who continues to work on the margins to infiltrate super-powered terrorist groups like the Court of Owls to this day.

It wasn’t until Emma Houxbois, in characteristic clarity, slapped my continuity brain back into thinking mode and made me realize: of course this is what happens. Of course.

And just as assuredly as Dick would find himself armpits deep in an ethical and sociopolitical dilemma like the one we read here, he has a son who’s ready to challenge everything that he believes.

What goes around comes around for the Bat-family, kids.

It is a difficult scenario to put my finger on ethically, this meta-human police state that Dick has created from whole cloth after initiating a reverse-creation moment himself. It’s clear the goal isn’t to kill. That much I gather for sure. There are attempts to be as humane as possible with threats. But civil liberty? It’s a mere shadow, if that, in the year 2040. At least where super-humans are concerned. 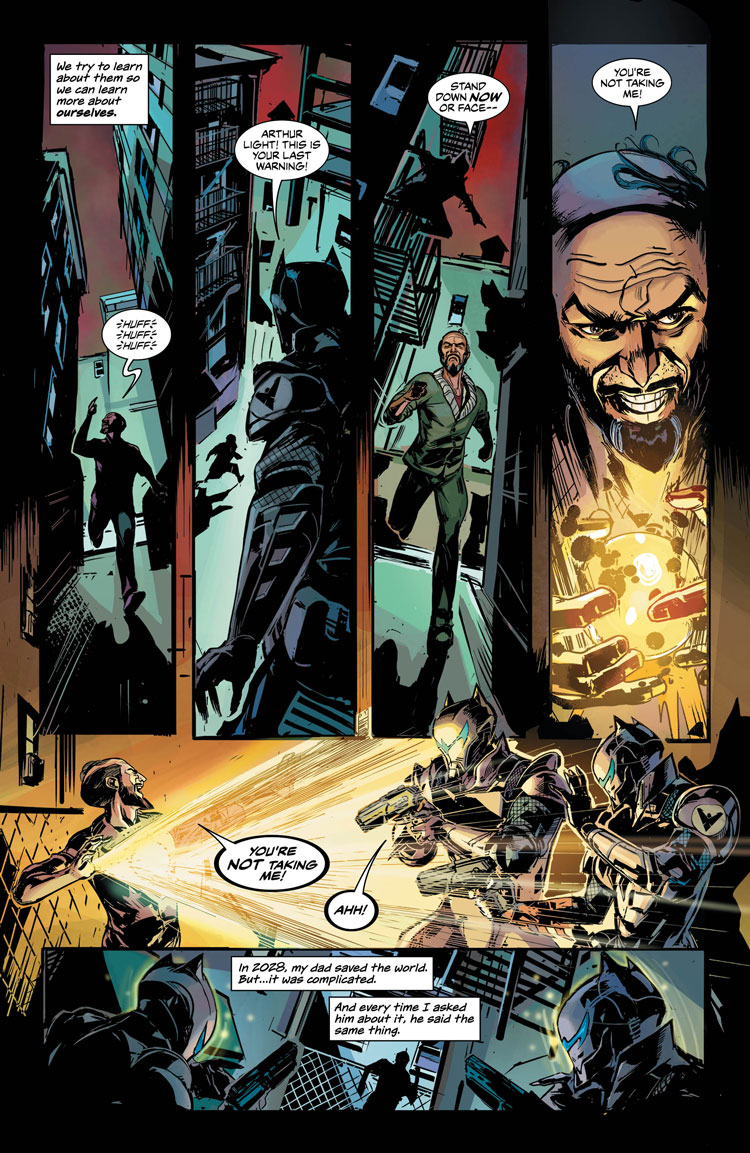 Higgins does ease us into the conundrum of it with a pretty savvy choice, actually. Arthur Light is arguably comics’ most famous rapist, and so we begin to see a slippery slope develop on the argument for and against the removal of powers by force and medication. Serial sex offenders have long been the subject of debate in terms of the value of pharmacological intervention methods, including forced chemical castration. That procedure in particular is legal in 9 states, opposed by the ACLU, but not been explicitly ruled in violation of the prohibition against either the 8th or 14th Amendment to the US Constitution yet.

But then apply that same line of thinking to homosexuality, as most famously applied to mathematician and military hero Alan Turing after WWII, and well, Dick Grayson’s police state doesn’t look so valiant anymore. And of course, because I can’t let it be left unsaid, the argument against chemical castration of homosexuals isn’t on the slippery slope. It’s not even close to the hillside. It’s a barbaric, cruel, and unconscionable treatment to those whose genetics and behavior pose no threat to society, and should in fact, be celebrated for their love and uniqueness.

But the question here I think Higgins is working his way around with Nightwing is this: where does the line get drawn between when it is acceptable to police by force a genetic or behavioral disposition, and when is it not? Are super-powers dangerous enough in and of themselves to warrant crossing over that line.

I think young Jake Grayson clearly thinks not, which is a fascinating POV from which Higgins begins this tale immediately. We’re ostensibly reading the thoughts of a man in the far, far future, looking back on years ahead in our own future, at the repercussions of a decision his father made in the distant past (still our future). There’s certainly an intellectual safety in that many layers of distance, but there’s also a sense that there is a moral certitude behind what happens next.

We know Dick is wrong, because the existence of Jake’s very narration tells us he’s wrong. The trick is connecting the dots.

In some ways, Trevor McCarthy does this book a disservice with the covers based on Russian and German propaganda posters of the early 20th century. Because the type of fascism being opposed in this book isn’t the kind invading other countries and establishing concentration camps. It’s the kind of state violence we already tolerate, and in some cases endorse, in the modern policing methods of the 21st century. 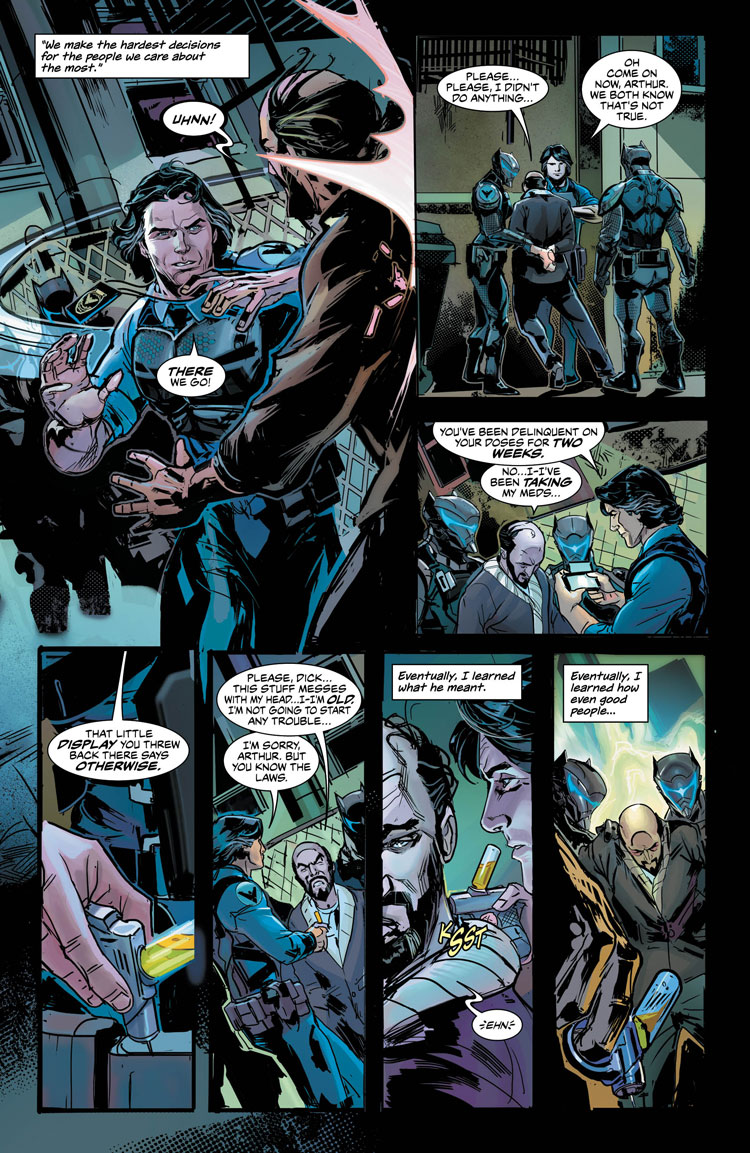 There is some element of familiarity in these designs in terms of color story to the current cultural narrative of Blue Lives Matter (an informal movement that seeks to diminish Black Lives Matter with an equivalence between the criticism of institutional racial injustice and the institution that enforces it, the police). But it’s hard to tell how much of what Dean White is doing with color palette is a reflection of that or Dick’s provenance as a Bat-kid.

The design McCarthy implements for the militarized police is certainly that of the Batman. However, it not only echoes works like Kingdom Come and the recent “Superheavy” storyline in Batman, but also mirrors the Ferguson era of police body armor that are facing those deemed a threat in the streets of our country (an era we still live in, by the way).

The costuming and architecture of the future is definitely McCarthy at his most creative in pencil and ink, although the faces of everyday people, Dick Grayson included, seem to suffer a bit. Masked, Dick strikes a cool look, but in everyday clothing he seems as brutish as the villain he pursues. Age isn’t being communicated so much as harshness and abstraction, and it feels a little overdone. Nevertheless, the attention to detail in environment is a skill worth applauding throughout the entire issue.

It’s bound to be controversial, but upon analysis, I hope the assessment of Nightwing: The New Order #1 doesn’t lose sight of the actual issues being addressed, for good or ill. This is not a story about corrupting a hero. It’s about the very nature of policing, its necessity, when it goes too far, and knowing where that line needs to be drawn.

I’m not sure this book will definitely answer that question, but in reality, what book could? We are living in a very troubling age of police action, and there are no easy answers. Would that we had someone looking back from the future to narrate for us.

But in any event, Higgins, McCarthy, White, and Cowles are driving a narrative that thankfully surpasses conflation and moves into more morally grey territory in thought and action. The real challenge will be living up to the promise of that kind of philosophical grounding as a story worth attention, discourse, and debate.