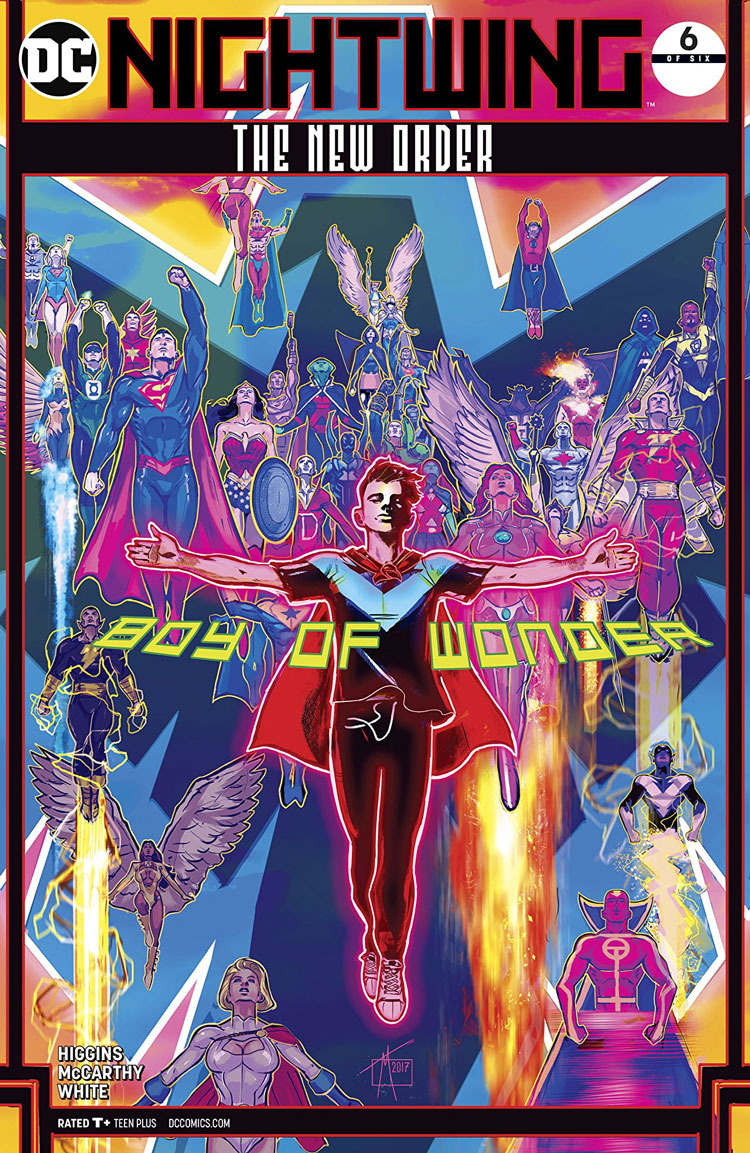 This dystopic DC future wraps up with the final confrontation between the ideologies (and fists) of the controllers and the controlled. Dick Grayson, former head of the Crusaders police force that keeps the powered in check through medication and intimidation, is on the run after discovering his son Jake is both powered and immune to the medical treatment that would otherwise inhibit his powers.

Jake is caught in the middle of a three-way power struggle between Dick, the former Teen Titans (now powerless rebels), and the Crusaders, led by former Batwoman Kate Kane. The final chapter also brings in the unlikely team of Superman and Lex Luthor, who have teamed up to bring powers back to the world.

McCarthy’s art has stayed strong throughout this series, with the grit and the grim in ample supply. He has a particular knack for the reveal and one can almost hear the music swell as heroes and villains enter the scene. White’s colors work well with the art, keeping the tone dark but defined.

The art team has their work cut out this issue with a cast of dozens populating the book by the climax. They keep the pace moving and action sorted.

Cowles’ lettering works well with the flow of the story and care was obviously taken by McCarthy to give Cowles room to work in a few exposition-heavy places. These are balanced well and do not feel like blocks of text crowding out the art.

Which leaves the success of this series as a story.

I think it is difficult to fit this series into a box as far as a political statement. My esteemed editor proposed in his review of #1 that the story seemed “about the very nature of policing, its necessity, when it goes too far, and knowing where that line needs to be drawn.”

Are super powers, as Matt said in his review, “a genetic or behavioral disposition?” Or are they weapons that traditional methods can not control?

As with many things, the lens we bring informs as much as does the source material. I was struck by how one could also read a pro-second amendment message in this story, as well. It is a tale that hinges on “we removed the weapons from the bad guys, but had to take them from the good guys too, and that was wrong.”

Both Matt and I both find ourselves rejecting the pre-publication hand-wringing of “MY Dick Grayson would never do that.” The nullifying bomb is the comic book equivalent of cutting the Gordian knot. A single determined choice that, he hopes, will solve the problem of super villains once and for all. No matter the cost. In fact, the morality of eliminating super-powers is never really questioned by Grayson. Instead he opposes only the policy of placing in suspended animation those for whom the nullifying treatment has no affect (in this case, Jake Grayson).

What is perhaps lacking in this series is answering the real question — is the world safer?

To venture into spoilers for a moment, one could go further and paint Lex Luthor’s attempt to give powers to the whole world as the manifestation of “an armed society is a polite society.” If we are to look at drawing lines, this then is the extreme and ‘too far’ presented in the story.

I have a hunch this is not an intended message of the creators, but I note it as a reminder that the meaning of a story happens halfway between the art and the reader. As a story, I found the series quite strong, as a parable, I think there’s a lot of gray.