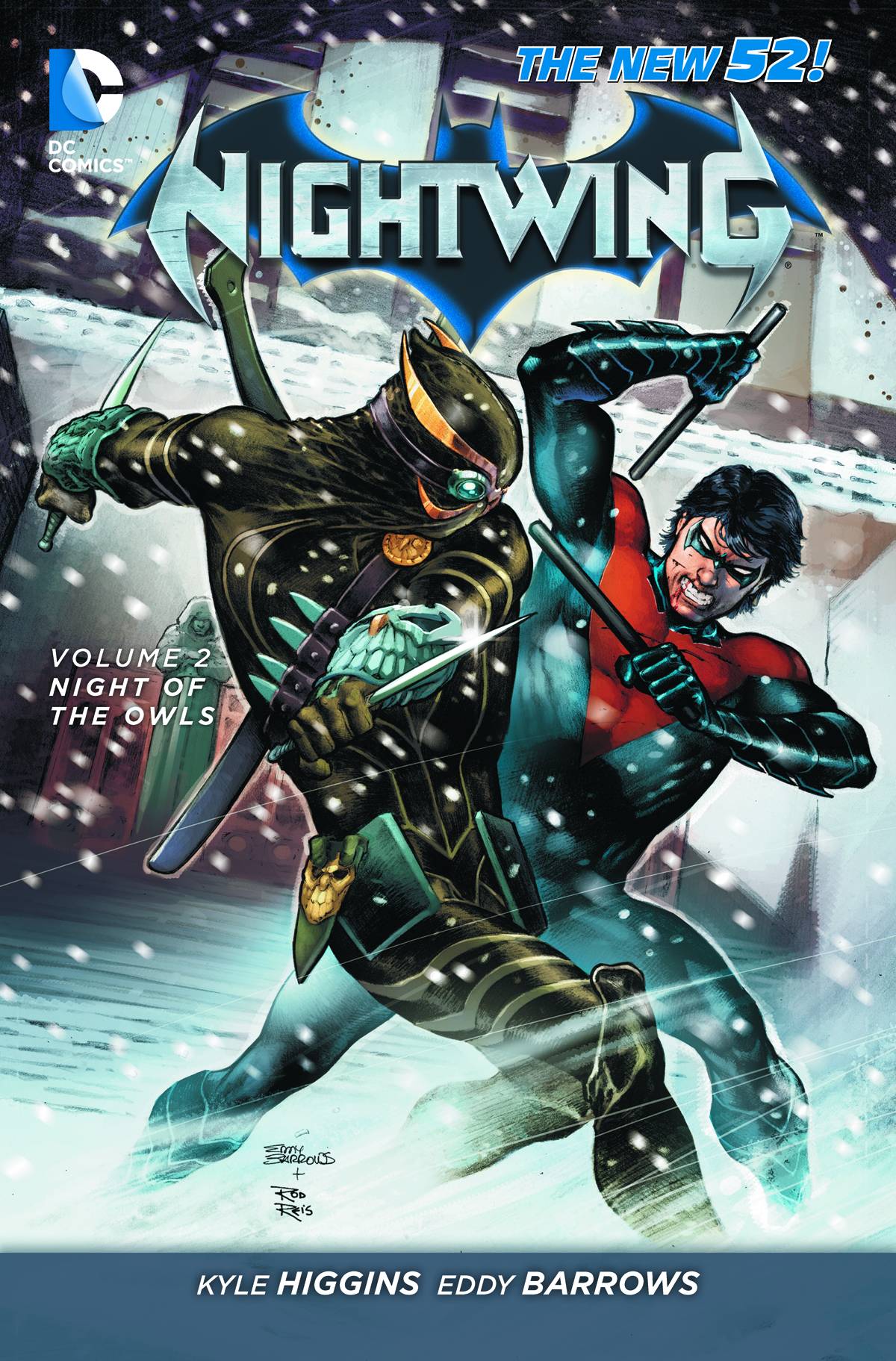 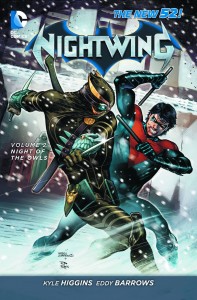 Nightwing is besieged by the Court of Owls and goes toe to toe with the Republic of Tomorrow in the second trade paperback of the New 52 series by Kyle Higgins and Eddy Barrows.

Nightwing is by far and wide the strongest of the series that tied in to the Night of the Owls Bat-family crossover, with Dick’s own past being examined and the back history of Nightwing benefiting greatly from this examination. Higgins does a great job of using this event as a springboard to dig deeper into his character rather than just pitting Nightwing against another faceless Talon just to assist Batman’s war on the Court from the primary Batman title. Higgins tells a great back story for Nightwing’s Talon, a man who has a personal connection to Dick and the Grayson family, which gives the start of this trade that much more impact than the regular out-of-title crossover books typically have. Higgins keeps the strong momentum of the first two issues in this collection as he moves into the next arc, pitting Nightwing against a radical group known as the Republic of Tomorrow. It was interesting reading Nightwing take on his own Court of Owls for lack of a better term, and it was entertaining to see the character performing detective work in his own style rather than just as an acrobatic clone of Batman. Higgins has a very strong voice for this character and does a fantastic job balancing action and dialogue in this trade, which features a brisk pace befitting the type of hero Nightwing is. His conflict with the Republic of Tomorrow is every bit as strong as his part in the Night of the Owls, and I found Higgins’ strong scripting kept me hooked on this volume from the first page to the last. His #0 origin issue was also well told, not merely regurgitating the tale of the original Robin, but planting seeds to show what made Dick Grayson unique and what qualities still exist in the character now.

The strong scripting is amplified and knocked out of the park by very skilled art from Eddy Barrows. Barrows and a handful of inkers do a great job of matching Higgins’ tone throughout the stories, ramping up the action when needed and providing interesting layouts for the quieter portions of the stories. Barrows style of showing the motion of Nightwing throughout the issues is excellent, showcasing the athleticism and acrobatic nature of the character in an easy to follow manner. His art keeps the energy high during the action sequences and is extremely solid throughout the collection. The art provides a strong framework for the skillful colours of Rod Reis, whose work on the sequences showing the history of the Talon is excellent. This is a very capable art team at work in this volume, and readers get to reap the benefits.

Nightwing Vol. 2 is a solid read from start to finish. Higgins and Barrows tell a great Nightwing tale and capably integrate the title into a crossover which is no easy feat. This is a great read for Nightwing fans or anyone reading the Bat family of titles. This is easily one of the best second volumes of the new 52 trades I have read.