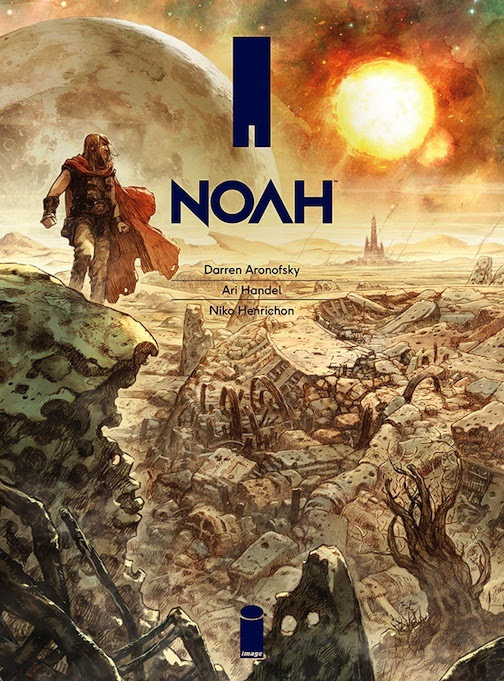 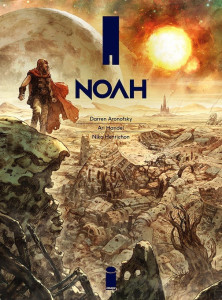 There is no question that Darren Aronofsky is one of the most talented film makers currently working today, and Noah is his biggest, most controversial project yet. As was done with The Fountain, Aronofsky and his screen writing partner Ari Handel team up with a talented artist to bring one of their screenplays to the comic book page. This time around the duo enlisted Canadian artist Niko Henrichon to tell the epic tale of Noah and his family. The end result is a dark, thought provoking, and visually stunning graphic novel that will be sure to incite controversy.

Noah is a well made graphic novel with one glaring problem that might prove difficult to overcome, and it has nothing to do with the artistry. In a world where the two most argued positions on any given issues seem to be the extremes, both the graphic novel and film versions of Noah are going to have trouble finding an audience. On one hand, the original screenplay used as the script for this book takes the story of Noah and expands it into a 256 page graphic novel. Aronofsky fills in the blanks, and builds upon single lines from the Bible to create a story about a man struggling with his faith that is darker, and deeper than the Christian scripture ever was. This will be sure to offend Christians that take their holy book literally, and are unable to view the actions of Noah in Aronofsky’s version as logical extensions of what is found in the Bible. With that said, the book remains a very spiritual tale that depends heavily on its biblical themes to drive much of the narrative. The story will be too biblical for non Christians, and not true enough to the Bible to appease the Christain faithful. If you are able to keep an open mind either way, you will find that the graphic novel is beautiful piece of art.

Aronofsky and Handel’s take on Noah is essentially the same story that has been told for well over a thousand years. The world of man has devolved to the point where God wants to wipe humanity. God tasks Noah with building an ark to save his family and two of every species of animal while the Earth is flooded. The story is already big enough to make for an entertaining book, but the flourishes added by the writing duo take the book to the next level in every conceivable way. Everything that is in the graphic novel, and not the Bible, add something to the story, whether to make the story more interesting, more relatable, or to add visual flair. A biblical story is turned into an epic disaster action movie that has a surprising amount of heart. Giants are mentioned in one line of the Biblical version of the story, and here they are given a major role. Human antagonists are added to give the story a sense of urgency, and to make the decision to let everybody die that much harder on Noah. Even questions that were never brought up, but we all wondered about, on how the ark was made, who helped make it, and where the wood came from are all asked and answered.

The strongest work by the writers however, is with the character of Noah. Noah is a faithful servant to God, but he is still a man that struggles with his faith, and family. Without giving too much of the character’s plot points away, Noah carries the weight of what he was tasked to do on his shoulders, and questions humanity’s role on Earth. Noah is a man with the future of mankind literally in his hands, and the script is strong enough to convey these emotions. This gives the story a dark undertone that carries on throughout the book. I was actually taken aback by just how dark it got, but then I really thought about how this is a story about almost every living thing on the planet being killed. Another testament to the script is that Noah’s family are given enough room to grow as characters, despite being there to primarily push the title character forward. The character work is constant, even when the book finds itself dragging a bit before the finale. The climactic scenes make up a quiet, yet thrilling final act that was earned through the buildup in the preceding 200 pages.

The real selling point to the graphic novel is the art of Niko Henrichon. Henrichon has put out stunning work in the past, as evidenced by his work with Brian K. Vaughan on Pride of Bagdad, but the art in Noah is on a completely different level. The style here is more of the scratchy, gritty variety, and matches the tone of the story perfectly. Everything about the art is beautiful, and the range that Henrichon shows throughout the entirety of the graphic novel is impressive. Whether it be the desert wasteland before the flood, the raging waters during the flood, the groups of animals converging on the ark, the humans slaughtering each other, the giants in battle, or the quiet character moments, the art is phenomenal. The ability that Henrichon has to be able to consistently capture whatever emotion the script is going for, while staying true to the apocalyptic setting, is uncanny. The use of muted earth tones as the color palate throughout the book helps reinforce this feeling. One of my biggest worries about seeing the movie is that the art in the graphic novel will have ruined it for me. After reading the book and then watching the trailer two things stuck out in particular; first, the movie feels too clean. This is a testament to Henrichon’s art being able to really portray the world Noah inhabits as one that needs to be purified. Second, the movie is very white-washed. While the movie is filled with primarily white actors, the graphic novel is diverse and feels more akin to how Noah and his family would have actually looked.

This graphic novel was extremely difficult to review, as the controversy will almost assuredly render my final verdict moot. If you are able to sit down and take the story at face value you can expect a story that is able to go from big, epic battles, to dark, character driven moments. You will find a story with messages about the Earth we live on, the importance of faith during adversity, and family. You will also find one of the best best illustrated comic books of the year. Niko Henrichon has been working on this book for a long time, and now it is time for him to become a star. The least surprising aspect of the story is the storyteller himself. You can always expect Darren Aronofsky to be daring, and bold enough to ensure that people are left discussing his work. This has never been more true than it is for Noah.