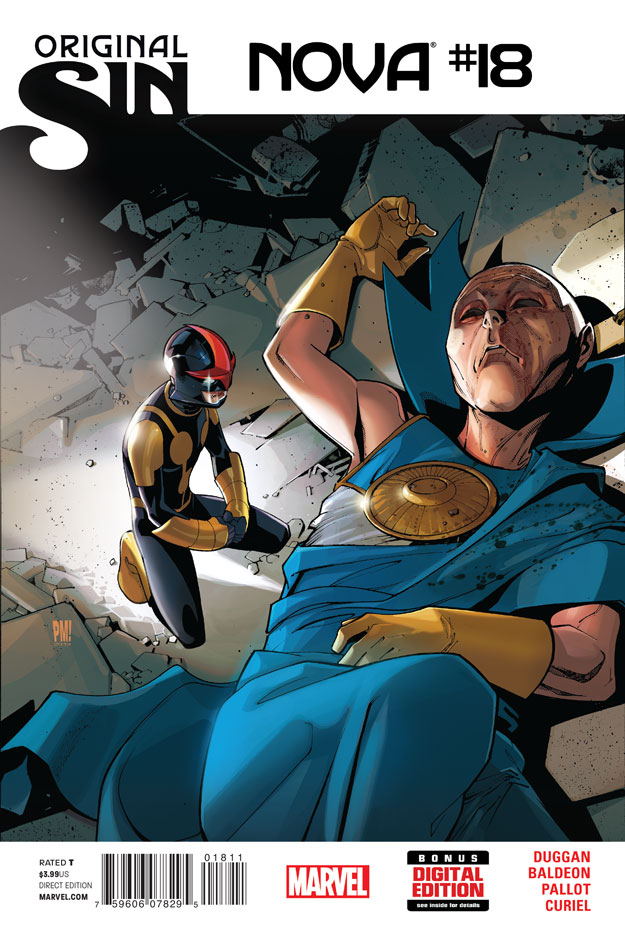 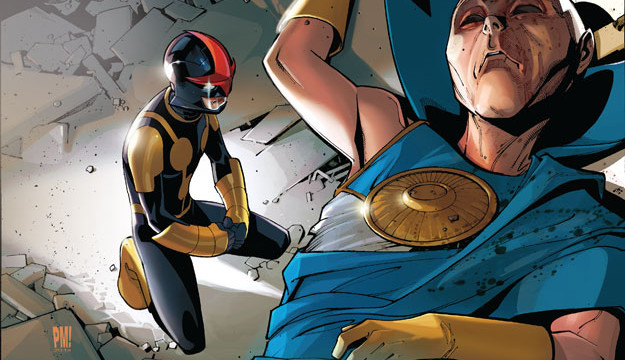 The inciting incident of Original Sin sparked an event that will affect many parts of the Marvel Universe, but there is one character in particular that has actually been affected by the loss of Uatu himself: Nova.

Gerry Duggan has given this title a lot of life since he took it over, injecting a great amount of heart into the characters and balancing the action with having an awkward teenage kid as the hero he is working with. Duggan focuses this story on Sam’s reaction to the death of his pal Uatu, and how a teenage human rocket would handle seeing such a thing….as well as finding out his father’s original sin. The information Duggan drops on young Sam is going to affect this character for a long time, and with one simple event this series got a helluva lot more interesting.

While this tie-in does not affect the primary event storyline, at least not yet, anyway, it is a great read for Nova fans who are also reading Original Sin as it brings the macro scale events to a micro focus on Sam, and how each moment is affecting this kid who is trying to play in the big leagues. Duggan writes Sam’s interactions with the Avengers very well, with characters like Thor stealing the show with one-liners and a minor heart-to-heart with Iron Man showing how even the big guns can have “daddy issues”. Moments like this are what makes Nova work, and Duggan is doing a great job fleshing these characters out and, more so than anything, making them more likeable by the issue. It’s downright heartwarming to read Sam interacting with his family and as long as Duggan can channel that feeling Nova will be a strong title.

David Baldeon provides solid art throughout the issue, evoking a lot of the pain and confusion Nova is going through. He uses body language very well to showcase a kid who is stunned motionless and he injects a lot of humour into the issue as well. His interpretation of Thing is worth the price of admission alone and he handles the cast outside of Nova quite well. His style suits the tone of the series very well and he hits the emotional beats of this issue perfectly. Baldeon captures the energy of Sam and his naiveté, working well with Duggan to provide a solid story overall.

Nova #18 is a very solid issue for fans of the series and character, but if you aren’t invested in Nova it isn’t a book that adds much to the plots of Original Sin. Duggan and Baldeon do, however, use the events of Original Sin to enrich the storylines of Nova very well and give readers an entertaining book that will definitely have me coming back for more adventures of Sam as he digs into the secrets that were revealed to him.