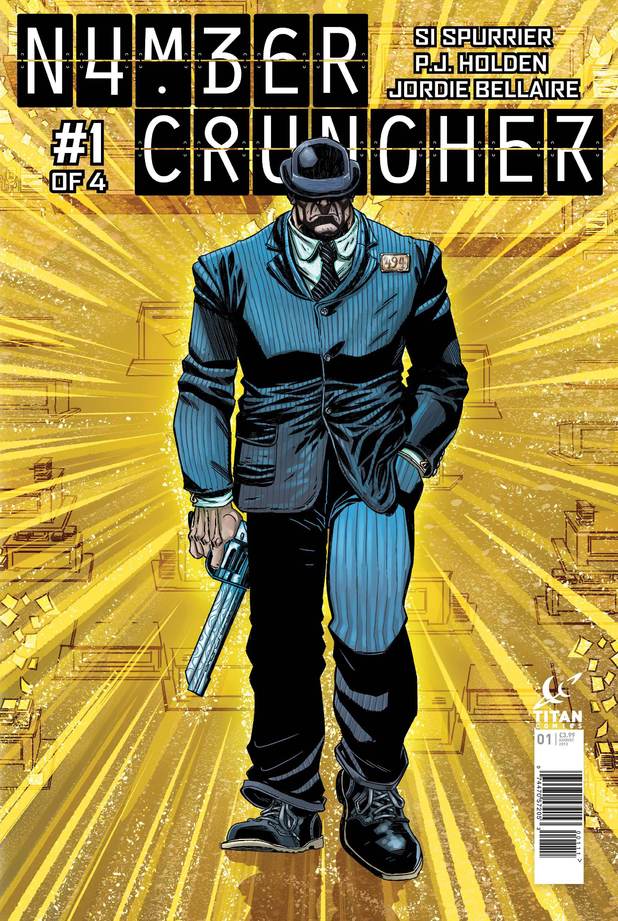 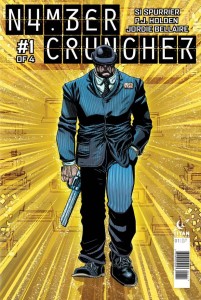 Si Spurrier has decided that it’s time for comics to math-it-up with a four-part mini-series collecting his story Numbercruncher, originally serialized in the pages of Judge Dredd Megazine. The after-life romp follows around an agent who does the bidding for a god-analog known as the Divine Calculator. Scientists continue to find new mathematical formulas that explain everything from DNA to the outer reaches of the universe, so Spurrier takes it a step further with a god who uses math to measure morality and sin.

The use of color by Jordie Bellaire is exacting. Life, reality, the human existence, if you will, is shaded in various tans, browns and pinks with the occasional panels of blue. The land of unforgivable numbers, however, remains in Holden’s line art: black & white (as originally printed) highlighted and contrasted with grey colors. This differentiation creates weighted emphasis that the narrator places on life and his disdain he holds for the Divine Calculator passing judgement, albeit through mathematical formulas, on mankind.

Spurrier’s use of phonetic dialect, for his first person narrator, can be a little tiresome at first.  However, the voice becomes endearing coming from the seemingly hard-nosed, bowler-hat wearing agent known only by the name “#494.” The agent not only tells his own story but introduces a new character, who may be friend or foe. The issue itself makes it unclear whether the long-term arc is looking to tell us a “bosom-buddies” adventure or something more antagonistic (I’m betting on the latter).

While the story does leave off with the hint of a twist to come, and enough foreshadowing to guess what lies ahead in the next issue, there is no drastic cliffhanger to force the reader or twist someone’s arm into buying the next issue.  The only thing to push you into reading next month is the strong story, with philosophical overtones, dramatic art and detailed color choice that shines as the crowning jewel of Titan Comics’ new line of books.