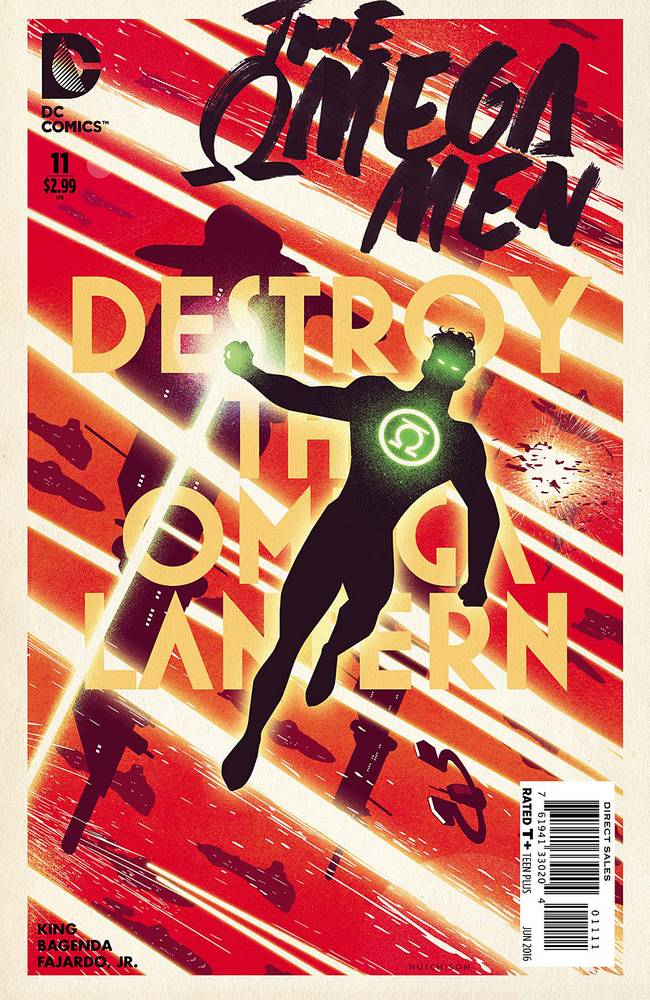 The Omega Men unite the Vega Sector to fight back against the Citadel, as the final battle looms.

This is a penultimate issue, which are always tricky. How do you sustain interest and build toward your climax, without feeling like you’re marking time until the actual ending, to come next month? There is, in this issue, a sense of moving pieces around the board to set up the end game. King and Bagenda, though, masterfully combine necessary plot movement with character moments that set up the human conflict to come in next month’s finale as much as they prepare the stage for the climax.

With the forces of the Citadel arrayed for a final assault on Vega, the Omega Men separate to rally the planets of the sector, each in their own way. Kyle hires a mercenary army on Hyn’xx using the last remaining known refined Stellarium. He also buys back his rosary, which was sold a few episodes back. It’s a small thing, but interesting symbolically. Kyle and Kyle’s faith has been one of the foci of this series; his faith in God and in his principles as a Lantern, in contrast with the Vegan faith in Alpha and Omega. Kyle is renewed in his faith in his ability so suss out solutions in a universe that, he is learning, is utterly bereft of easy answers.

We see Scrapps, forcing the Pontiff of Changralyn to mobilize his forces at gunpoint. She talks about her loss, of her family, her planet, Broot, and Doc, and how it has turned her violent, like Broot before her. In Scrapps, we have a character whom Vega’s cycle of violence has turned into a person for whom violence is the only answer. It’s difficult to say, under the circumstances, that she’s incorrect.

We see Tigorr, the traitor and outcast, fighting his way to the top of the heap and reclaiming rulership of his people. He regains their respect by proving that, despite his upbringing as the pet of the Citadel’s viceroy, he retains a connection to his culture and roots as a savage warrior.

We see Primus, the eternal non-entity, making another video, surrounded by the corpses of the recently killed. We watch him struggle on camera as he tries to reconcile his deeply-held pacifist beliefs with the thing he has become, with the violence he has wrought. Primus reasons himself into an explanation for how he can still believe peace is the answer while literally covered in the blood of the slain. It’s as callow and empty as Primus himself, and we’re left with a sense that Primus is what lies at the end of the path of compromise that Kyle now treads.

At last, we see Kalista, now the queen of Euphorix after her assassination of the king, her father. The subtle suggestions that there might be something more sinister to Kalista than we had suspected move from subtext to text. Kalista does not have the same internal struggle as Primus. She lives for violence and revels in death. She does pledge a modest reform to her traditional daily routine: She will continue to fight natives each morning, but will no longer kill them as she finds it cruel. “And anyway, the war is coming. I will do my killing there.”

The War. Violence, and how it unites the Omega Men and draws them together, even as they deal with it in their own ways. For Scrapps, violence is a necessary reaction, a brutalization as a result of violence visited upon her. For Tigorr, violence is a connection to his roots. For Primus, it is a necessary evil. For Kalista, it is a way of life. For Kyle… We don’t know yet. His answer to violence will supply the ending of the tale.

As always, Bagenda’s art perfectly suits the story. His rough characters and heavy inking aptly match a universe where there are no clear-cut good guys or bad guys. It gives the entire comic a grittiness, an unromanticized vision of violence and war. We learn more from the cruel turn Bagenda gives to Kalista’s lip at her coronation than we could from a dozen villainous monologues. Romulo Fajardo Jr.’s colors, a muted pallette of greys and beiges with an ocassional splash of red-brown blood, enhance the comic’s realistic tones, in which there is no real glory in war.

It’s a shame this comic is ending with the next issue; I would have loved to see what other stories King and Bagenda could tell with this cast of characters. With all of the Omega Men converging on the Citadel’s Viceroy, it’s clear there is to be no pat solution to the war in Vega. But when the Omega Men inevitably come into conflict with each other, who will win out? I don’t think I’ve ever had less idea of what’s going to happen in the final issue of a series, and I can’t wait to find out.