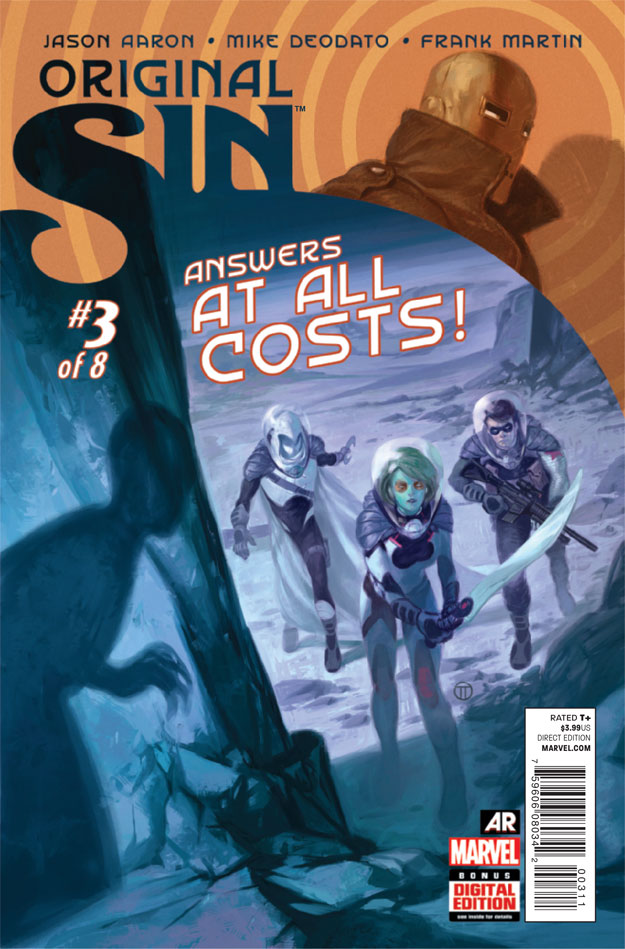 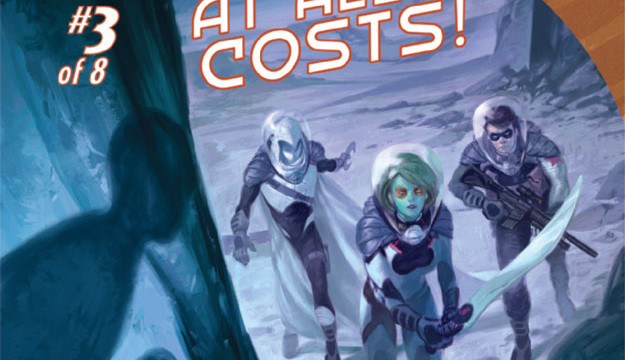 Did Aaron and Deodato just do that? Really?!??!?! Shocks and twists come to light in Original Sin #3 as the creative duo kick this event into overdrive.

A quarter of the way through this event, Jason Aaron had done a solid job building a mystery. Issues 1 & 2 of Original Sin featured a lot of setup, but that is to be expected when building an event such as this. With Original Sin #3, Aaron decides to start throwing nothing but heat, moving the story along at a brisk pace before throwing readers one hell of a curveball at the end. I will admit the final pages of this issue shocked me like I haven’t been shocked in a comic book for a very long time, and I have to applaud Aaron for going for broke with this event. Issue #3 builds steam as it goes, picking up immediately after the final page of issue #2 with Orb “setting off” the Watcher’s eye. The way Aaron reveals the secrets being unleashed from the Watcher’s eye is excellent, creating an organic way for tie-in titles to fold into Original Sin and build upon the events of this book. As the issue progresses the tension grows by the page, culminating in one of the wildest and most unexpected finales I’ve read in a Marvel comic this year. Deception, betrayal, countless secrets….Jason Aaron is throwing everything he’s got at readers and at characters in this comic and it is interesting to read their reactions to information that hits them within these pages. He writes the confusion of these characters well, with many heavyweights on both Fury’s team and the “mystery” man’s team searching for answers to a question larger than any one of them can comprehend. Aaron writes some entertaining scenes with Orb, the unexpected spark that lights the powder keg of this series, and he generally has a good handle on each of the characters in this comic. As the tension of the issue mounts there is a desperation in the voices of some characters that will only grow stronger as issue #4 drops, and I commend Aaron for the strong pacing of this event. Original Sin does not appear to be an event that keeps readers waiting long for action and big moments and if you are waiting for an event that “matters” before picking this series up, then you are sure as hell getting it with the final page of this comic.

Aaron’s strong writing is matched punch for punch by Mike Deodato. Deodato deftly captures the grand scale of this event without skimping on detailed work for each of the characters. In this issue he handles a massive cast, diverse locations, huge splash pages, shocking action…and he never misses a beat. Deodato’s ability to create tension with shadows makes him a great artist for this kind of story as we still know very little about what is going on in right now. Characters and readers alike are in the dark to the plans that are running beneath the surface of Original Sin, and Deodato handles the confusion and lack of knowledge in the facial work of characters perfectly. Deodato delivers what is going to be an iconic image for this series in this issue, hammering readers with an image they are not going to get out of their brains for quite some time. Every page of this comic is high stakes and high tension, and Deodato hits the mark with every page in this comic.

Jason Aaron and Mike Deodato have pulled the pin on a massive grenade with issue number 3 of Original Sin, and it’s going to be very interesting to see where this event goes next. This issue is definitely the strongest chapter yet, and with the shocking final pages I’ll admit to having no clue where this is going….and I’m loving every second of it. For anyone on the fence about this event, this issue is a biggie and there is information in this comic that will affect every corner of the Marvel Universe. This event officially matters as of this issue, and I can’t wait to see what these creators are going to throw at us next.