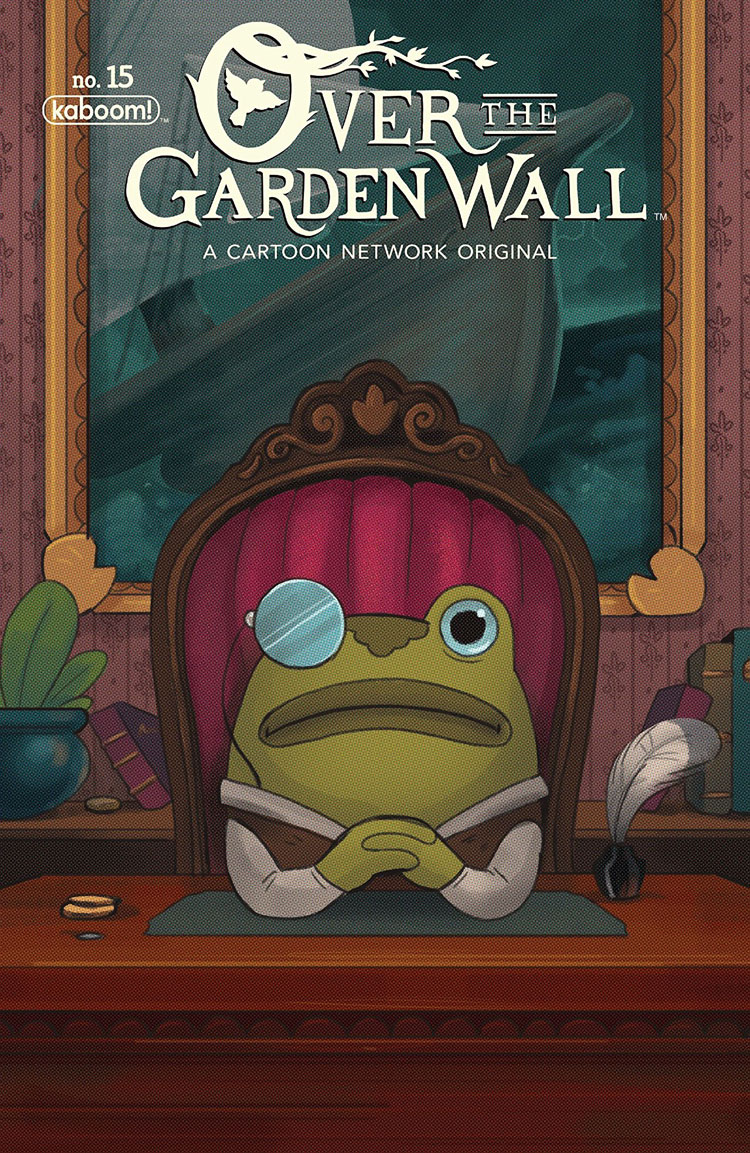 Greg, contemplating his revelations about the Hero Frog in the previous issue, finds himself untangling a more complex knot of a problem than he previously anticipated as Wirt and Sara try to warn the townspeople of their mayor’s betrayal in this latest installment of Over the Garden Wall!

Burgos and Sjursen-Lien do a great job in blending their styles so that their writing seamlessly flows from one story to the next. Both keep the levity and bizarre 1800s atmosphere of the piece while throwing in the random clever joke every once and a while.

While I generally love Greg’s story sections more, I feel that Sjursen-Lien has a stronger story with Sara and Wirt this issue and she seems to generally have more fun with the kookiness of the world these children live in. I especially love the Frog Court scene, there’s a lot of good writing in it and just seeing the more British looking court is fun.

While the art style of both Campbell and McGee work well for Over the Garden Wall, the transition from Campbell’s art to McGee’s could have been done a bit better and the contrast, though minor, is stark and is a bit distracting at first. Another minor problem I have is that in McGee’s work, Wirt’s bangs length varies vastly depending on the panel.

However, my minor problems with the art don’t mean I didn’t enjoy the work nonetheless. I love Campbell’s backgrounds, especially his forest backdrops. The usage of shadowing and negative space works well and the trees are all so beautiful. His coloring is wonderful as well. He chooses great gradients of colors that create a fairy tale atmosphere. It kind of looks like he water colored the backgrounds, it’s quite stunning.

Despite the bangs, I do actually love McGee’s drawings of Wirt more. She just draws him more adorably. Her backgrounds are a bit more minimalistic, but I love them with the brighter colors that Bruni uses. I really like the small details that McGee sticks in there as well, like the tiny picture of a piece of cake that a frog carries and the man in the frog costume. Weird details like those make a comic vastly more entertaining.

Over the Garden Wall is definitely a good read. It’s a strange dive into a Victorian, Huckleberry Finn kind of world with fairytale creatures that balances the fears of wives tales well with their whimsicality. I wouldn’t say start at #15, but definitely read this if you have the time.