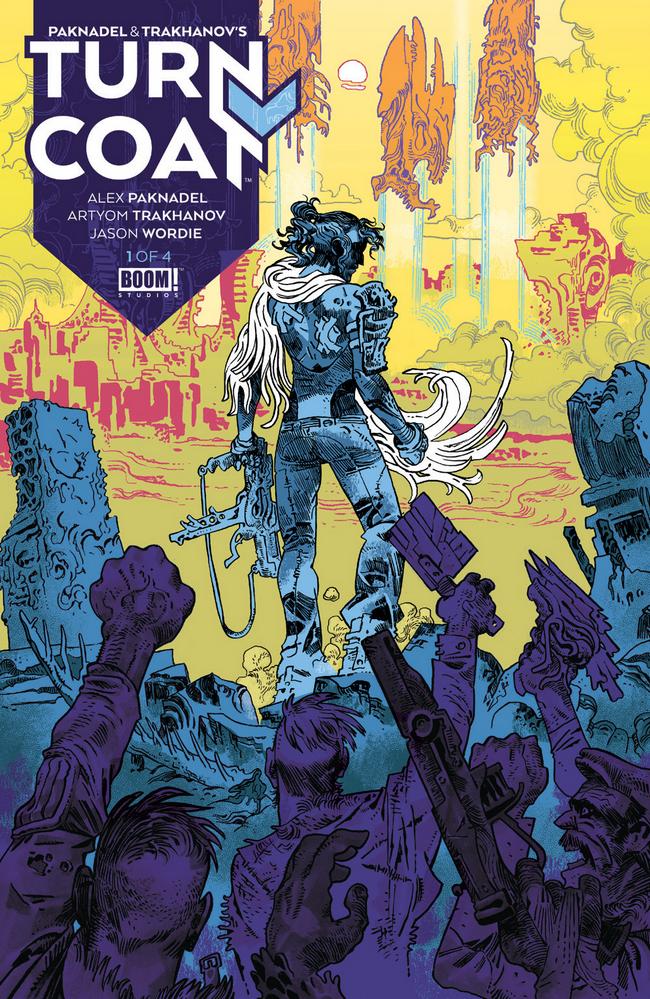 It’s a BOOM! revolution. Paknadel & Trakhanov’s Turncoat #1 is the most recent of the powerhouse BOOM! titles that have been released over the past half year. This new series, written by Alex Paknadel, art by Artyom Trakhanov, with colors by Jason Wordie and letters by Colin Bell, is the perfect dystopian mystery/thriller. It’s packed with things I love, like strong female protagonists, ominous aliens, strange hybrids, and a little bit of freedom fighting.

Paknadel & Trakhanov’s Turncoat #1 follows Marta, the woman who seemingly turned the tide of an uprising against alien overloads referred to as Management. Marta’s decision has some pretty severe ramifications for her personal life, though, and her life constantly toes the line between both sides of the alien and human war. After Marta’s participation in the rebellion comes to full fruition, the story jumps forward five years where Marta has started her own detective agency. She’s tasked with locating a missing child, one that may just be an important piece of the human-hybrid-alien clashes.

Together, Paknadel and Trakhanov have created a wonderfully intriguing world, ripe with fast-paced action and hard-boiled detective-work. In just one short issue, Marta has sleuthed her way right into my heart. From her wonderfully depicted annoyed side-eye stare, to her no-nonsense attitude, Paknadel has written a dynamic character that Trakhanov has brought to life beautifully. Paknadel’s vision for this comic is no doubt huge; there’s a lot going on in such a short span, and it also promises much more ahead. But despite the intimidating amount of texture in this world, Trakhanov has painstakingly portrayed every detail. The two clearly work well together in bringing this story to life, though there are some story-telling hiccups along the way. In some panels, the art and narrative seem oddly paired, sometimes confusing the flow of the story. Overall, however, the pairing works stylistically and the tone is conveyed solidly.

Paknadel’s story is dynamically unique in that it utilizes big concepts from both the sci-fi genre and noir/mystery genre in an almost even manner. Rather than leaning one way or the other, this first issue dives into both head first, providing a captivating narrative that begs to be told. Right from the first page, the story is compelling, and it becomes sufficiently fleshed out as the story progresses. Every character introduced stands out in memorable ways, and the blend of personalities plays out in quirky fun. The narration itself is a great addition throughout the story and the dialogue always adds useful context.

Trakhanov sets this world on fire with his highly-stylized art. I really enjoy the way his art is filled with lines, yet soft and open in all the right areas. He has a knack giving his characters impactful expressions which bring a ton of life to each panel. Moreover, his character designs are some of my favorite I’ve seen of late, donning his characters which interesting tattoos and markings and giving Marta a wonderfully powerful stature and musculature. Jason Wordie’s colors bring each page new depth. His bright tone adds layers of detail onto the art, making this book an exciting read. Colin Bell knocks it out of the park on lettering as usual, his unique style adding to each page.

There are few teams that could tackle a this mixing of the noir and sci-fi genres so well, but Paknadel and Trakhanov do so in a truly entertaining manner. This first issue sets the world up beautifully, the pacing spot-on for the rest of this mini-series to follow. This first issue is just about as good as it gets, from its original and promising conceit to its wild and exciting execution. Paknadel & Trakhanov’s Turncoat #1 is one book you need to pick up.