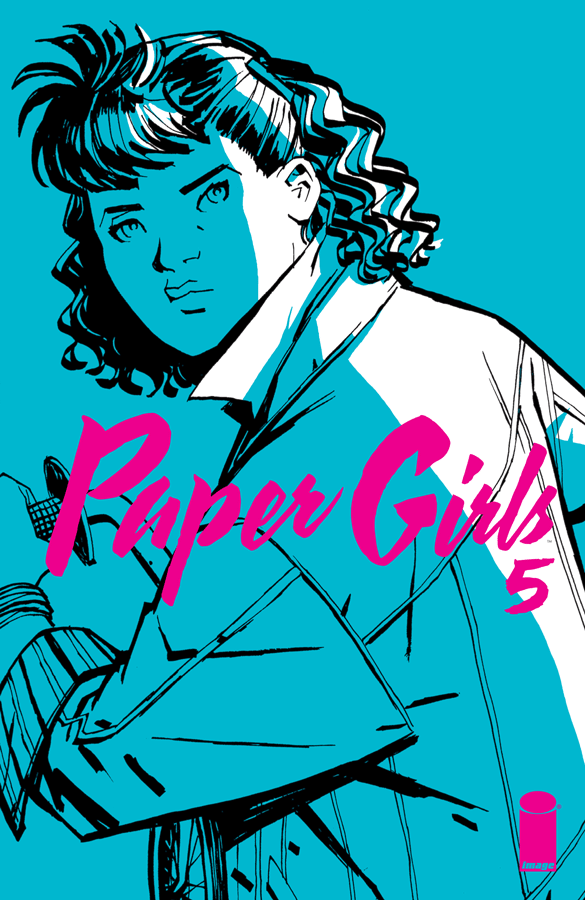 Erin takes front and center as Heck and Naldo help her recover from her wounds. Meanwhile, Tiffany, Mac, and KJ uncover more of the mystery and head to find their displaced friend, getting some unsettling news in the process. In a last ditch effort, Erin finds a way to save herself and her friends, leading to a startling development for the crew.

There is some major timey wimey stuff going on in this issue, which on my initial read it was a bit confusing. Keeping track of the story’s pace was sometimes tedious, though with a re-read things made much more sense. I like the little gems sprinkled throughout the issue involving a certain ubiquitous tech company. This chapter ranks a bit lower for me than the previous ones, but Paper Girls #5 is one string in a much longer story. There are still a lot of questions I’m ready to see answered, especially regarding the series’ antagonists.

Brian K. Vaughan’s strength in this issue is character development. Tiffany and Erin both saw some rather dramatic changes through the story. Tiffany is becoming much bolder and she made some major steps to help her crew. Erin on the other hand is becoming more real, as she expresses to Heck her true feelings about the other girls. Mac even shows another part of her character beyond the hardened teenager. These changes enliven the characters and will enhance the story with each new issue, as the group’s dynamics are sure to change.

Cliff Chiang’s emotive art meshes well with Vaughan’s writing. Chiang’s style is a great fit for emotional stories and facial expressions, which I feel had more of a presence in this issue than the ones previous. Matt Wilson’s color schemes draw out the eerie, dark, and cataclysmic elements of the story, and I like how there are specific colors used in various scenes. There’s a really brilliant page after the girls have made their escape from their pursuers. They each have their own panels and color schemes conveying the action. Wilson’s use of monochrome schemes is a talent, and it comes out full force in this moment. The use of brightness within these panels is distinct and evocative, drawing out specific elements within each image.

I’m definitely invested in this story, but while Paper Girls #5 had a lot of action, it didn’t seem to hit me quite like I expected. I’m excited to see where it goes and how things develop, especially with the last page reveal. There’s a lot of promise in this story, and I want to see how things change as we get to see more of the main characters and the people and creatures they come across.