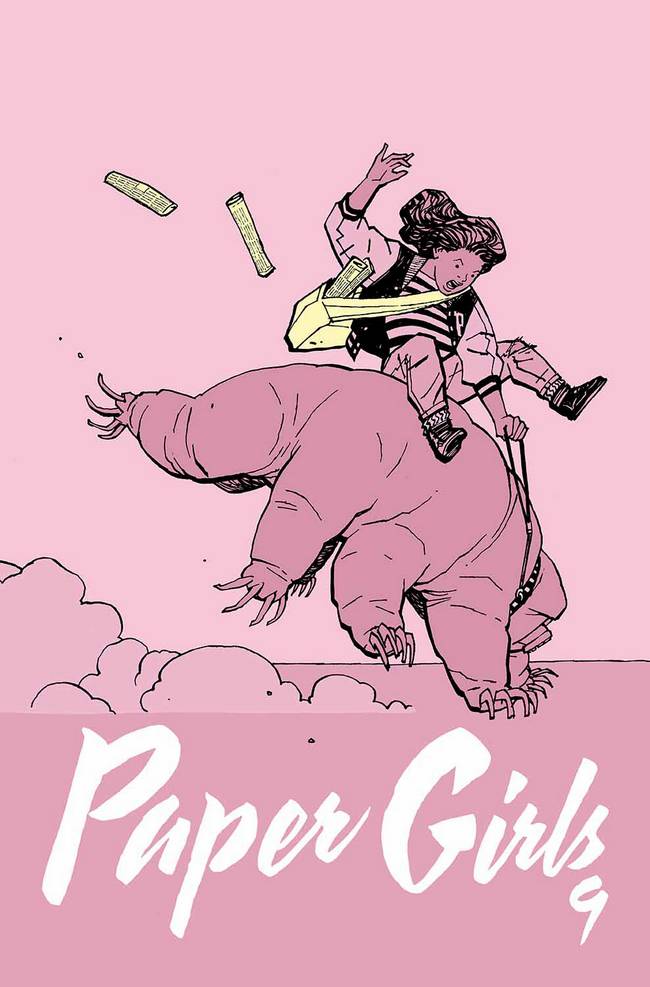 In a world where everything is not what it seems, how can Erin choose which future version of herself she can trust? Vaughan and Chiang deliver yet another exciting installment in this thought provoking comic series!

Vaughan keeps the reader guessing at every turn. The more the papergirls learn in this Strange Things-esque story (or, more accurately, I would say Stranger Things is a Paper Girls-esque story), the more blurred the lines are for the audience on what side from the future to trust. The mysteries Vaughan sews into this tale, especially with the ominous “DO NOT TRUST OTHER ERIN” etched into the field hockey stick, are expanded upon and become even more tension filled in #9. I love the growth seen within only a few issues for Mac. I also highly enjoy the way Vaughan always starts his issues with a cryptic line that’s reminiscent to volumes of Bleach with its ominous beginning lines of poetry. The way Vaughan goes about correcting the time travel paradox is particularly smart as well.

Chiang probably has so much fun when it comes to the artwork in this comic. From Other Future Erin’s backpack to the giant water bear chasing the group of girls, there is just so much imagination needed to bring Paper Girls to life. Even the future, which sounds like a pretty terrible time from what the readers know, is portrayed as this beautiful yet alien place when Chiang is given the opportunity to show it.

I especially love these two pages that he created that feel more like the beginning of a science fiction World War II story than girls jumping through time towards the future. There’s this gigantic zeppelin that looks almost as if it was a design for Del Toro’s next Hellboy movie. Dinosaurs fly next to it as well as these futuristic orbs with mechanical tentacles growing out of them. It looms over an unsuspecting Cleveland with a dastardly air to it. Paired with the wonderful color choices of colorist Matt Wilson, the zeppelin of the Old-Timers feels especially sinister. I’m really excited to see what they do exactly with the zeppelin in the installments to come.

Paper Girls is a comic dripping with 80s homage, yet is done tastefully with the complex and imaginative ideas of a modern creator of science fiction. It’s a piece that makes you think and a piece that makes you come back for more. One shouldn’t start on issue #9 if the want to start reading Paper Girls (Why would anyone start on issue #9 of anything? Go buy and read it all!), but if you’ve been loving Paper Girls so far, this issue will not disappoint.