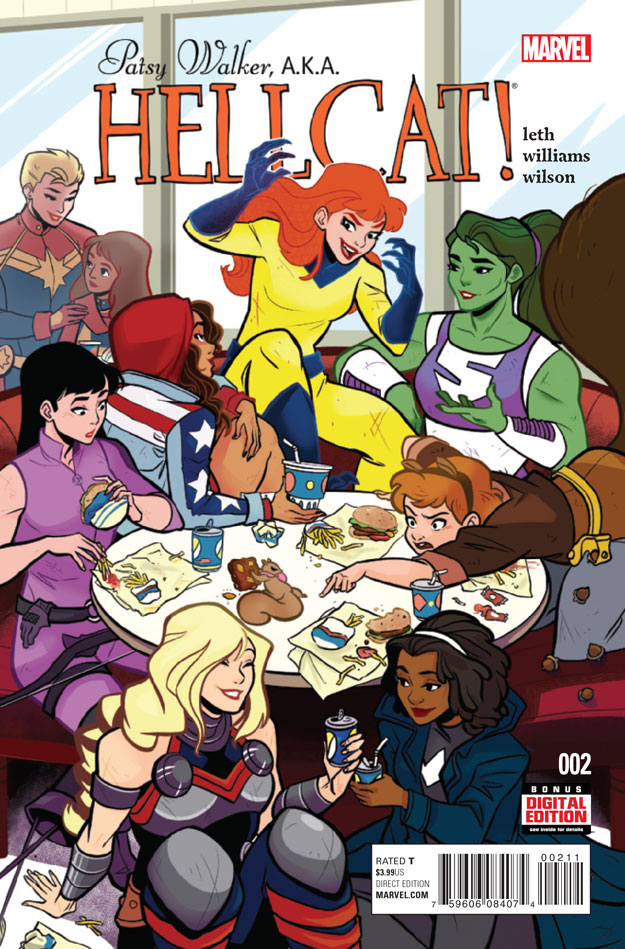 Sometimes, it helps when you don’t have to get a background check.

Patsy is trying to make ends meet wrangling clothes in a retail nightmare. After running back and forth to check inventory and small time criminals, she comes face to face with a significant setback. Yet, our Hellcat knows how to bounce back with a little help from her friends, even after getting news of a familiar and unwelcome face making a comeback.

It’s strange to think that we are still testing new series in the All-New All-Different era of Marvel, but here we are with Patsy Walker, A.K.A. Hellcat #2 and we’re on a great ride. I like that this series is a departure from the typical cape fare. For a returning character, Patsy could’ve easily donned her yellow and blue spandex to fight demons and criminals. Yet, what she’s doing is handling the reality of being gone and back again and living life as an everyday woman who can magically manifest her costume. The realistic edge of this series and its humor are winning me over yet again, making Patsy Walker one of my top picks among Marvel’s series.

Seeing Ian again was a delight, and I hope we get more of him. Both he and Tom need to be featured heavily in this series rather than relegated to the sidelines. Having openly queer characters will always be important, especially considering Marvel’s recent stances, so I hope this comic pushes Ian, Tom, and others to the forefront.

Kate Leth excels at using a comedic backdrop to explore Patsy’s role in Marvel’s continuity. There are some great hints dropped regarding her past that clue new readers into her extensive history. Patsy is someone immersed in a world in which she doesn’t fully fit, and her latest job exemplifies her disconnect with some parts of society. Leth infuses a wonderful sense of humor and frustration into someone who’s had to work through her fair share of trials, ranging from demons to death. The scene where some of Patsy’s closest friends show up was my favorite, as it was a wonderful illustration of not only Patsy’s connection to some amazing Marvel ladies, but also how many of Marvel’s women run together in a show of support.

The playful art perfectly captures the undercurrent of comedy through this issue. Both Brittney L. Williams and Megan Wilson give off an energetic vibe in the art, hitting both the chaos of retail work and Patsy’s endeavors at getting her life more on track. The art seems to capture Patsy’s spirit and her optimistic though easily frustrated outlook on life. I also love that this team put work into creating a background of characters that is mixed and varied. They’re not all White, they’re not all tall and thin, and there’s a mix of genders and ages. These small touches make Patsy Walker a true gem and bode well for this series pushing Marvel to hopefully better directions.

For something lighthearted that’s still rooted in history, pick up this issue. Kate Leth is definitely hitting an amazing groove in exploring Patsy and there are some subtle clues as to where to begin reading about her history. There are some amazing guest stars and some light jokes that carry the story, features that make this series stand out in this new wave of Marvel comics.