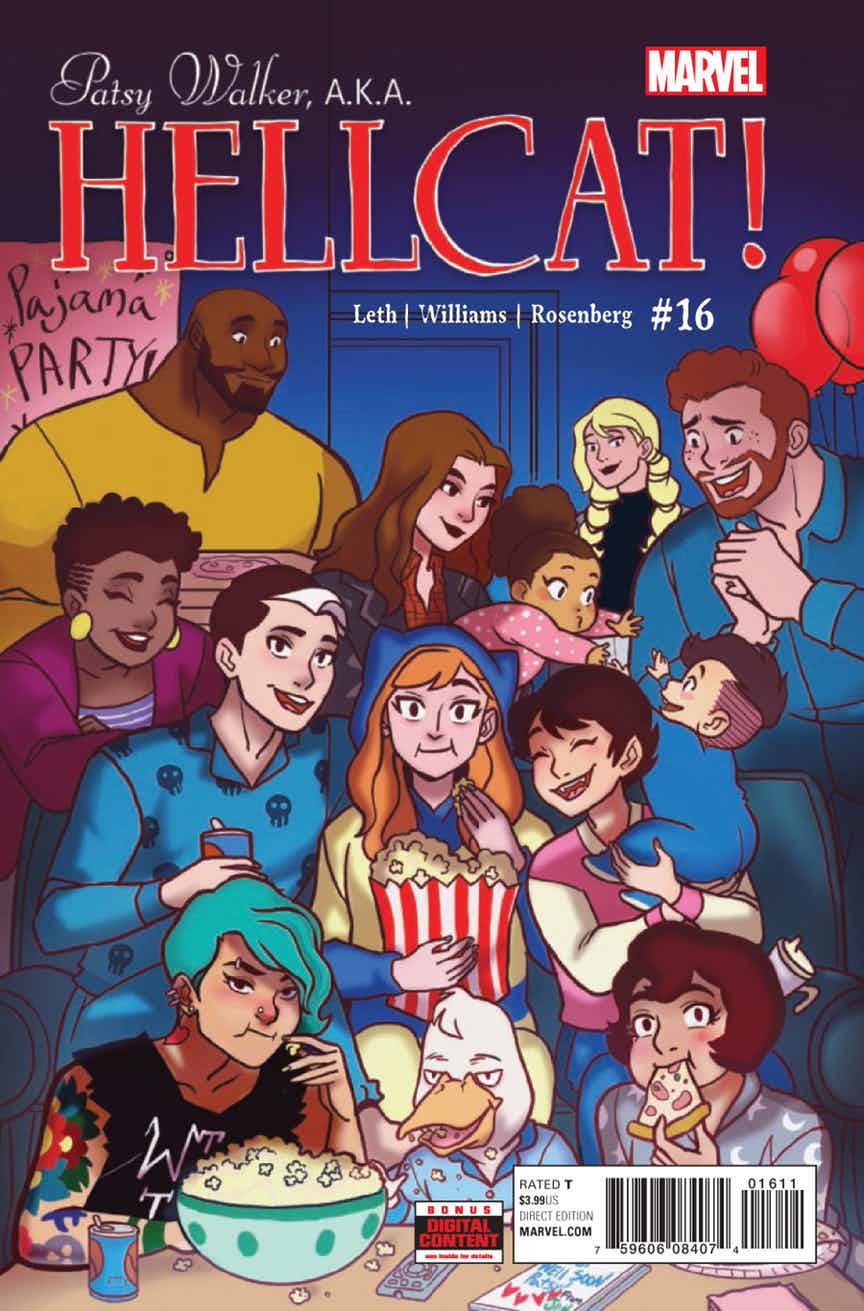 The most improbable Marvel series in recent memory comes to a conclusion breaking by one of the biggest taboos of the superhero genre: suggesting that sometimes hugging it out is a better solution than punching it out.

The metaphor behind Patsy’s cosmic flu gets its payoff this issue as, much like her personal problems, she’s put off dealing with it until the consequences have become too severe to avoid. This time, it’s the disappearance of the entire 68 Jay Street building on top of turning Miss America into Miss Canada and giving her greatest fears and anxieties corporeal form as a giant tiger.

The solution, as with most things in Patsy’s life, comes from Hell.

In a neat little twist of fate, Patsy’s lifelong frenemy Hedy found love via an unexpected sojourn in Hell where she met a far more well adjusted Belial than we last saw him. Belial is doing so much better than when he attempted to turn Patsy into an anger demon that he offers to help Patsy cure her cosmic stress flu by guiding her through a confrontation with the underlying issues that brought it about.

It’s a poetic return to the series’ debut issue when Patsy talked Ian out of being a supervillain and into an hours long conversation about Wicked. Compared to other recent insurgent titles at Marvel like Mockingbird and Nighthawk, Hellcat had an impressive run, lasting for nearly a year and a half, but it still seems like convention can only be bucked for so long at the House of Ideas.

What Patsy has to confront is that everything she’s facing from keeping her business running to thwarting enemies like Black Cat has taken an especially brutal toll on her because of the loss of She Hulk from her life following the latter’s life threatening injuries during the Civil War 2 event.

It’s no exaggeration at all to say that Civil War 2 cut the heart out of Hellcat, it was all but said outright in issue #8 that Jen was Patsy’s emotional and physical rock. That issue featured an especially powerful portrayal of intimacy between women at a time when mainstream comics seemed to be doing their most to portray women as being fundamentally catty and dramatic towards each other, making this issue’s revisitation of it all the more bittersweet.

It’s a rare moment in contemporary comics where we’re allowed to live in a quiet emotional moment outside of immediate storytelling concerns, made all the more resonant given America’s whiplash break up from her girlfriend in her debut issue, giving the entire unravelling less than a single page.

Belial acting as a surrogate for Patsy and shapeshifting into Jen to give her some semblance of what they’d previously shared is a powerful note for the series to go out on, but it also raises the question of how long it’ll be before anything — romantic or platonic — between women displaying the kind of intimacy portrayed here will be seen again from a female creative team at Marvel. Beyond just a send off for Hellcat, this issue is effectively the end of 68 Jay Street itself, which was a short lived but greatly cherished institution at Marvel.

The Soule/Pulido She Hulk run ended long before Patsy Walker AKA Hellcat began, but it established the core sensibilities that went on to define both it and the Zdarsky/Quinones Howard The Duck revival that ended last fall. Together they represented a bulwark of lighthearted comedy and a sustained respite from the self seriousness of Marvel’s flagship titles that just plain doesn’t exist anymore.

There are new insurgent titles rising up to take the place of the latest wave of cancellations like America and The Unstoppable Wasp, which seems to be part of an ever more cynical ebb and flow at the company. Titles that fight to swim upstream and tell the stories that underserved audiences deserve are unceremoniously dumped without an official word, leaving the creative teams to break the news to readers via social networks.

Patsy Walker AKA Hellcat was a book that was loudly unconventional from the outset: it was even more dedicated to de-escalation and non violent resolution than Harley Quinn’s most altruistic moments, wore the characters romance comic origins on its sleeve, and allowed Brittney Williams to lean hard into the visual language of shoujo manga in a way that is more often than not derided in the mainstream. It’s a spirit and an aesthetic that has no heir apparent.

It should have been a watershed moment for Marvel, and it could be that it was or will prove to be in the future but when there’s no discussion, no statement, just a discovery prompted by an omission in the deeply arcane solicitations, there’s no way to know.

Leth, Williams, and Rosenberg’s collaboration was inarguably a unique and fulfilling journey to follow them on, but the fundamental question Marvel’s treatment of the series is whether it ought to have happened there and with those characters. Leth’s deft touch at comedy and coming of age narratives was sharpened to a razor’s edge long before Hellcat, as made clear by her work on School Spirit, Edward Scissorhands, and Adventure Time: Seeing Red and Brittney Williams shines no less bright on Goldie Vance.

The magic spark that animated Patsy Walker AKA Hellcat was theirs alone, and could have just as easily caught flame in any intellectual property portfolio, say nothing about a set of characters sprung from their own minds. The final regular issue of Hellcat and the forthcoming mall special are a very long series of goodbyes, but they’re also a monument to what the mainstream can produce when a space is made for iconoclastic creators to bring their full selves to their work.