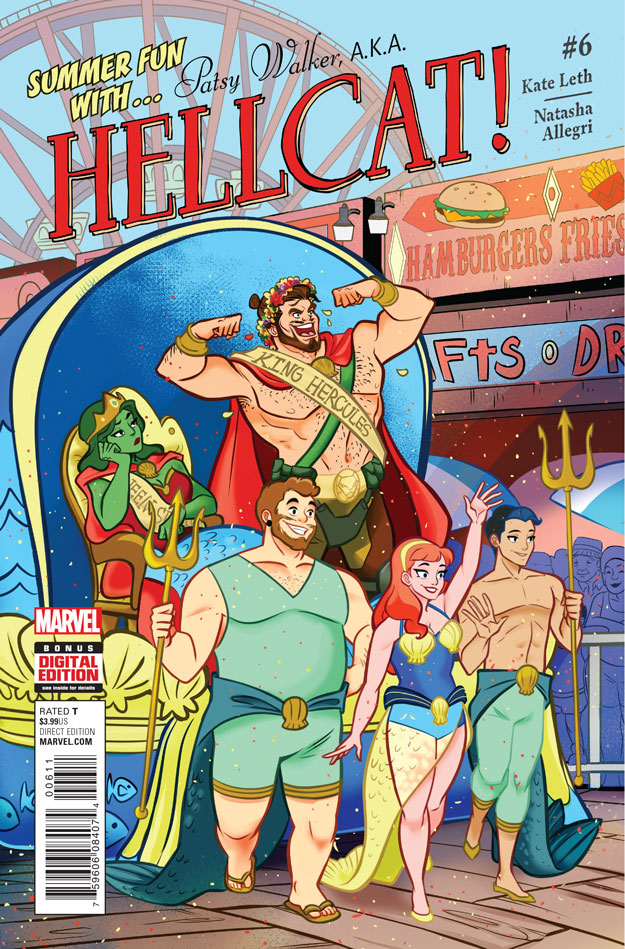 The team up of the year is here and Civil War II hasn’t even started yet. No, not Jessica Jones. She’s only kind of sort of in this issue, and that kicks off for real next issue. It’s Kate Leth and guest artist Natasha Allegri of Adventure Time and Bee and Puppycat fame!

Call me cynical, but Hellcat astounds me on an almost monthly basis for the fact that it exists in the current Marvel lineup and is capable of doing the things it does. Quirky female lead titles aren’t particularly revolutionary, but an all-ages quirky female lead title with women both writing and drawing packed full of queer themes and sporting unabashedly anime inspired cartooning is about as unexpected as a superhero book can get these days. Whatever black magic Will Moss is up to that has allowed him to assemble the trifecta of Howard The Duck, Squirrel Girl, and Patsy Walker a.k.a. Hellcat, I want in on it.

Bringing Allegri on is a master stroke on a number of levels. She’s a perfect complement to series regular artist Brittany Williams (if you’re missing her this month as you ought to, make sure to pick up Goldie Vance) who will hopefully bring her own fan base along with her, that much is obvious.

The really clever bit of this issue being a one and done day trip to Coney Island is that the Hellcat team gets to really make the readers work for the Jessica Jones team-up they’ve been clamoring for since the series was announced. She entered the game last issue, and we get a glimpse of her this issue, but the real payoff won’t be until next month. (At the risk of inciting a hate mail campaign against me, I’ve never been a fan of Jess, but I have supreme respect for Team Hellcat’s hustle for the build up.)

What’s struck me since the first issue and has been an odd bone of contention with many critics is that Hellcat has very consciously stretched the elastic about as far as it can go from hewing to conventional superhero storytelling. Despite the oddball comedic flair at work in Unbeatable Squirrel Girl, Ryan North and Erica Henderson are still more or less making a comic about a plucky super hero who beats up bad guys, but Hellcat is an almost aggressively pacifist book that is far more interested in exploring the relationship dynamics at work and finding people jobs. If there’s a throughline to what Hellcat presents as the forces of evil, it’s pretty much capitalism and prejudice. The villains so far have been cruddy bosses, shady landlords, and litigious high school frenemies. That, to me, is what truly proves the viability and necessity of the title instead of being a mark against it. Hellcat is the kind of book that readers typically leave the Marvel and DC sphere to find.

The story is about the gang taking a day off, and that seems to work on multiple levels as Leth takes the opportunity of this being a one off with a guest artist to really cut loose from the expectations around a Marvel book. There’s warm comparisons to be made to Claremont era New Mutants going to the mall and stirring up trouble they didn’t expect, especially given that it features an X-Men villain, but Leth and Allegri take us on a deep dive into Sailor Moon territory by presenting Arcade as a sensuous bishounen lording over an arcade that could have been transplanted straight from Naoko Takeuchi’s conception of the Azabu-Juban shopping district. The rise of shoujo manga as a major influence in American comics has been slowly gathering momentum for years, but it’s truly a watershed moment for it to move from background characters and easter eggs to overwhelm an entire issue like this.

Allegri is the perfect artist to deliver too, because while Williams integrates an obvious and highly effective influence into her style, Allegri’s cartooning leverages several very specific artists across the issue to put on a workshop without losing coherence. Eagle eyed readers can spot bits and pieces of Rumiko Takahashi, Naoko Takeuchi, and Go Nagai at work in addition to Allegri’s personal style that draws on both her work for Bee and PuppyCat and Adventure Time as the situation demands.

What struck me the most about Allegri’s work this issue is how she uses fingers to reveal character and drive the action. There’s all kinds of wacky faces and modulations of rendering at work across the issue, but Allegri seems to apply the most intimate details to fingers, whether it’s how Arcade plays with various props to play up his sleepy eyed languorousness, Patsy pressing her index fingers together to appear sheepish, or to convey Jen’s conviction as she picks up a skee ball. The nuances of her work are fascinating.

The real star of the issue artistically is She-Hulk. From the first sketches Allegri teased on Twitter, it was clear that she was going to deliver an utterly unique build and soft femme aesthetic distinct from Brittany Williams’ and Joe Quinones’ already iconic takes that won’t be forgotten any time soon.

Allegri pushes it further when Jen agrees to de-hulk (via magical girl transformation sequence) in order to participate in Arcade’s challenge. This is where Allegri pulls out the Go Nagai influence to make her possibly even more resplendent and imposing in human form than she is hulked out. There are very few artists who can bring the physical presence and bearing to Jen that she deserves, and almost all of them are drawing her on a semi-regular basis right now.

The cherry on top is Jess’ looming presence throughout and the little details that Allegri puts in like the jewel charm on her cell phone. The payoff is brilliant, yielding the most engaging portrayal of the smart-mouthed PI I’ve ever seen. Allegri reaches deep into her bag of tricks to imbue Jess with the slouchy, non committal demeanor of Marceline the Vampire Queen, revealing her leaned up against a banana with a sign on it saying “please do not sit.” It’s an incredibly fun deviation from Michael Gaydos’ hyperrealism and the suffocating gloom of the Netflix series that stays true to her aloof nature and will likely translate well to Williams’ style as she retakes the reins next issue.

Ian and Tom remain flirty this issue, which is a great dynamic to see kept up, but in the spirit of this issue delivering some of the most improbable joys from a superhero comic, Ian clarifies to Patsy that he’s bisexual after he lights into Arcade for assuming he’s dating Jen because they’re different genders.

Given Marvel’s recent rollercoaster of miserable PR regarding the portrayal of LBGTQIA characters (ie: accepting a GLAAD nomination for Angela: Queen of Hel while publicly refusing to describe Angela’s sexuality as falling within that spectrum, the poor framing of Iceman’s coming out, the denial of Hercules’ bisexuality and Deadpool’s pansexuality) it’s incredibly refreshing to see a bisexual writer with a sizeable body of work and activism on the topic of bisexual visibility get to say the dreaded “b” word in an all ages title.

It doesn’t ameliorate my perspective on the executive branch of the company’s public fumbles, but it’s a step in the right direction and a vote of confidence in Will Moss and assistant editor Charles Beacham’s ability to ensure their creators can bring their full selves to their work.

Superhero comics are a loud genre that reward and promote the splashiest and most divisive product, but it’s the the quiet revolutions that achieve the most profound and lasting change like Judd Winnick choosing to reveal Kyle Rayner’s ethnicity as Mexican-American, John Ostrander and Kim Yale reintroducing Barbara Gordon as Oracle, or Jimmy Palmiotti and Amanda Conner codifying Harley Quinn and Poison Ivy’s relationship as romantic in nature. Ian’s bisexuality is unlikely to rank with those choices in the long term, but Patsy Walker a.k.a. Hellcat is an insurgent title that consistently pushes against conventional wisdom in novel and worthy ways.