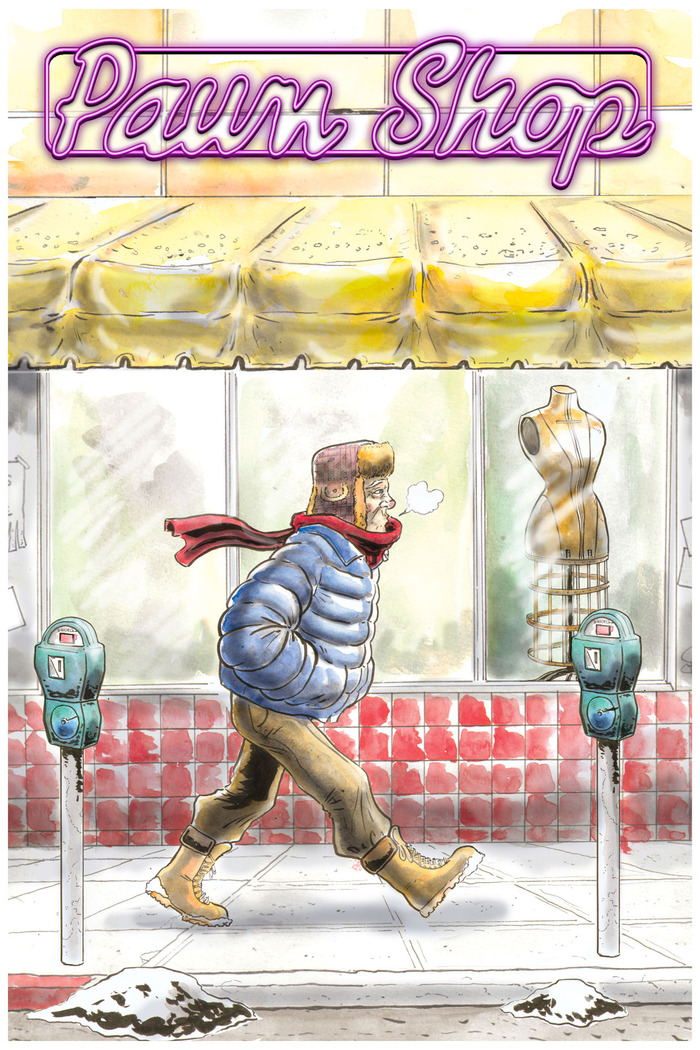 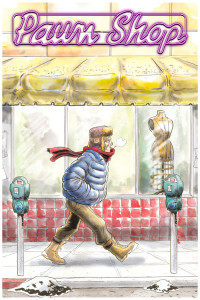 I often find myself wondering about comic books as a medium. I think about where they started, and how far they’ve come. I also think about what they are truly capable of as an art form. Today’s marketplace is still dominated by the major superhero titles. The big bombastic comics with the larger than life heroes fighting the dastardly villains to the death (until the resurrections happen and the cycle repeats itself over and over). But then, every so often a book comes along that reminds you about the powerful potential that comic books have to tell stories that transcend the page to comment on something much larger, and far more important than the average story. Pawn Shop by Joey Esposito and Sean Von Gorman is one of these special books.

When you first open up Pawn Shop you are presented with a forward by Amelia Cole writer Adam P. Knave. In this foreword he talks about Pawn Shop as a quintessential New York City comic. To quote him directly, he says, “It’s the most NYC of all NYC comics I’ve read.” While that very well may be true, I felt it goes beyond that. I can say that it is one of the most human of all the books I’ve read about the human condition. The beauty of this book is that it will mean something different to everyone that reads it.

To me, it was a book about what it is to be a human being on this crazy planet we call Earth. This is a story about life, death, love, loss, sadness, struggle, and ultimately hope. It truly does cover the gamut of emotions that we experience throughout our lives. To do this, Esposito makes the story about four regular people whose lives intersect at a normal New York City pawn shop. Just a normal group of people living their normal life who all just happen to have visited this normal place of business. Each character is at a different place in their lives, and when it’s all said and done they each have had a greater impact on each other than they could ever realize.

The story could be about anybody, anywhere, and that’s why each reader will take something different away from their experience. It is also a large part of what makes the book so special. To say anything more would be criminal. The less you know about Pawn Shop going in the more powerful it is. Just know that this is a book well worth your time.

Esposito’s script is strong, but it wisely relies heavily on the art of Sean Von Gorman, and together they make a great team. The painted style allows for the book to capture the wide range of emotions in the script while heightening the emotion of the final product. The art is realistic without being gritty, but not too realistic to take away from the sometimes whimsical, hopeful feeling at the core of the story. It may sound like an oxymoron, but the best way to describe the style is cartoony realism.

The opening pages taking the reader throughout the major New York landmarks are breathtaking, but the art goes from good to special when it focuses on the characters. This is a quiet book, and in a book full of quiet moments the composition of the characters mean more than they might in other books. It’s the facial expressions that shine the brightest here. Esposito is smart by having several chunks of the story with little to no dialogue, thus allowing the work of Von Gorman completely sell the emotions of the story. Through and through, Pawn Shop is a beautiful book.

You can get your hands on Pawn Shop a few different ways. The book is split into four different chapters that will be released weekly on Comixology. You can also buy a signed physical copy from Joey Esposito’s online store. I suggest you read the book any way possible, but it was a complete joy to sit down and read in one sitting. For that reason I would say the best way to read it is to head on over to Esposito’s website and pick up a signed copy. Then once it’s delivered go find a nice quiet place to read, and take it all in.

If that isn’t possible, then make sure you head on over to Comixology and pick up the first chapter. There are a lot of comics out there these days, whether they be from the big 2 or creator owned, that take up a lot of shelf space whether physically or digitally. Pawn Shop isn’t just one of the good ones, it’s one of the great ones. I can only hope that this is the beginning of a long and beautiful partnership between Esposito and Von Gorman.